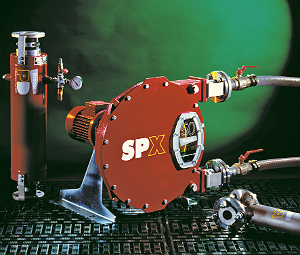 Since adopting Bredel SPX50 hose pumps from Watson-Marlow Pumps Group in various parts of its process, the water treatment plant at Kembla Grange has saved significant costs associated with downtime and maintenance. The pumps were selected for tough applications, such as pumping abrasive lime slurry and corrosive chlorine solutions, which were causing expensive and inconvenient failures of existing pumps.

Located some 50km south of Sydney, Australia, the water treatment and filtration plant at Kembla Grange is operated by Veolia Water. It produces 210 ML/day of high quality drinking water across the Illawarra region on behalf of Sydney Water. Failures and downtime are simply not conducive to efficient operations, so having reliable equipment that can be maintained safely and quickly is vital.

"When you add up the ongoing hassles of other pumps types, it became evident that Bredel pumps were our preference," says Pino Taglieri, the plant’s operations supervisor. "The nature of the hose pump – it just pushes the lime aside with its shoe, they’re gutsy and get the job done."

Hose pumps are well suited to water treatment processes as they move fluid by compressing a shoe on to a reinforced hose in a circular motion, pushing pockets of fluid downstream quickly and easily by positive displacement.

Originally, two progressive cavity pumps had been specified and installed at Kembla Grange for dosing lime slurry, which is used to maintain and control pH in water. However, the abrasive nature of the substance wreaked havoc on the PC pump’s rotor and stators.

"It was hard to maintain the set-point flows and there were constant blockages," states Mr Taglieri. "Depending on the demand we’d go through rotors and stators every couple of months, which was a costly exercise. On top of the parts, it would take two guys two hours to fix, plus the hassle of cleaning the lines. A few years ago we replaced these with Bredel SPX50s and the hoses last over a year. The performance of the pump was far beyond our expectations and we had huge cost savings."

The inherent design of Bredel hose pumps means there are no intrusions in the flow path, eliminating any risk of blockages. This makes them particularly adept at handling problematic fluids such as abrasive lime, chemicals or sludge with high solids content, for example.

It was a similar story in another part of the plant where two piston diaphragm pumps were originally specified and installed to pump a chlorine solution into a 750mm main at 16 bar. Chlorine is a corrosive disinfectant, in effect bleach, making it a tough application.

"These pumps were a nightmare to maintain, the amount of time and effort involved as well as getting the parts. It would take up to a day and a half to get each pump up and running; from the set-up, the timing, etc."

Mr Taglieri again turned to Bredel pumps for the solution. Bredel pumps are self-priming and dry-running, making them easy to start and stop. Relative to other pump types, Bredel hose pumps have one wearing part – the hose. In this instance, the two SPX50s installed at Kembla Grange were fitted with Hypalon hoses, which offer excellent chemical resistance.

"They last three to four months and take an hour to switch out – what a difference it has made," adds Mr Taglieri.

In truth, these two applications are not the first time Bredel pump technology has saved the day at Kembla Grange. Mr Taglieri has been on site here since day one and has seen multiple investments in equipment upgrades over the years.

"We are constantly looking to improve the processes on site as new technology becomes available," he says.

During the design phase of the plant in 1996, Mr Taglieri was engaged with consultants regarding some of the equipment selection. A Bredel SP100 sludge pump was installed in the drying bed area, and to this day, the site has only had to replace a single hose from wear during a 16 year period.

"We have an old 100mm Bredel pump used to transfer very thick sludge that is indestructible," he confirms. "It is turned on for only two to three hours a week, but literally we have serviced it twice since it was commissioned. The first time was due to operator error, the second time it was from wear, that’s it."

It is clear that the engineering behind Bredel hose pumps has more than paid off at Kembla Grange.