VaraCorp provides wastewater aerators with one of the highest oxygen transfer efficiencies in the market.

Central to the efficiency of the wastewater aerators is its turbine technology. This technology uses a next-generation approach to generating dissolved oxygen. The operation of the VaraCorp turbine is not unlike the operation of a turbine on a jet engine. As the turbine spins beneath the water, it creates a low-pressure zone within its internal chamber. This chamber is immediately filled with air that is driven down the tube by atmospheric pressure.  This air is then discharged rapidly outward by centrifugal force.

The turbine creates oxygen clusters, which have been measured as small as 0.001 to 0.01mm. Such small clusters are ideal to increase the population of aerobic bacteria.

While small oxygen clusters are critical, the turbine also generates oxygen clusters that are slightly larger. Being buoyant, these larger bubbles slowly rise to the surface and escort volatile, odour-filled gases upward until they gently escape into the atmosphere. Weighing less than 350lb, the VaraCorp turbine aerator can push dissolved oxygen outward in a 100+ foot diameter and downward for 10ft or more.

Objectionable odours plague virtually all wastewater treatment lagoons. Odours are mostly caused by anaerobic bacteria, which consist of high-odour, low-efficiency microbes. The VaraCorp aerator is noted for its ability to increase the population of low odour, highly efficient aerobic bacteria that overpower the anaerobic microbes, thus reducing or eliminating odours. It is not unusual for lagoon odours to abate within days after the VaraCorp aerators are installed.

By some estimates, electrical power consumption can account for up to 60% of the operational costs of a water treatment plant.  Maintenance and repair costs also add significantly to operating costs. These are areas where the VaraCorp aerator shines.

The standard VaraCorp aerator uses a five horsepower, custom-manufactured motor, which has the power to outperform competing aerators with twenty horsepower. Such a reduction in horsepower can minimise electrical costs by up to 70%.

The VaraCorp aerator requires no routine maintenance. Simply install it and allow it to run. At most, clients are asked to check the motor amperage once per week to ensure the amperage level is within motor limits.

The five-horsepower turbine aerator injects a gross air volume of 76 cubic feet per minute into the lagoon. The oxygen transfer efficiency has been measured by an independent engineering firm in a field setting. The results showed an efficiency of 4.7lb of oxygen per horsepower-hour in a highly contaminated lagoon.

The VaraCorp aerator is made of corrosion-resistant materials such as foam-filled polyethylene and stainless steel. The turbine is made of nylon with 30% fibreglass for corrosion and wear resistance

VaraCorp LLC was founded in January 2012 in Texas to introduce the turbine aerator to the North American market. The turbine itself was developed over a ten-year period. 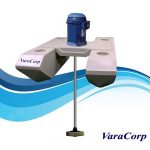 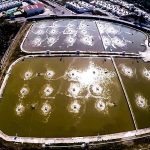 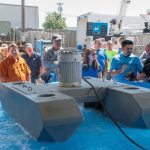