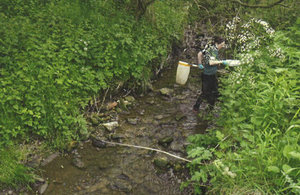 UK-based utility Northumbrian Water has been fined a total of £30,000 for two sewage pollution incidents that took place at Kyo Burn and in Bowburn Beck in 2013.

In June 2013, the Kyo Burn watercourse was running an unusual grey colour and smelt of blocked drains. An ecological survey revealed sewage fungus and dead invertebrates along a 1.8km stretch of the River Team downstream.

The burn had been affected by a sewage discharge from a storm overflow on the Tanfield trunk sewer. It is believed that the overflow had operated incorrectly because of a blockage, which could not be identified by the company as its monitoring equipment on the sewer was not properly functioning.

In August 2013, a blockage in a sewer caused a manhole cover to lift, and sewage flowed out across a farmland and into Bowburn Beck. The watercourse flows into the River Wear, south of Durham. Based on water samples and an ecological survey, it was revealed that a 1km stretch of Bowburn Beck had been significantly affected.

It was heard at Peterlee Magistrates’ Court that despite receiving information about the problem, Northumbrian Water failed to investigate the issue for four days and claimed that due to the presence of dogs on the farm it could not access the site.

Environment Agency environment management team leader Graham Siddle said that the sewage had a detrimental effect on the natural environment in both of the incidents that took place.

"Where possible, the Environment Agency works with companies to help them meet their environmental obligations, but where significant breaches are seen, enforcement action will be taken," he added.

Image: Northumbrian Water was sentenced for two offences of discharging polluted matter into watercourses. Photo: courtesy of the UK Government.