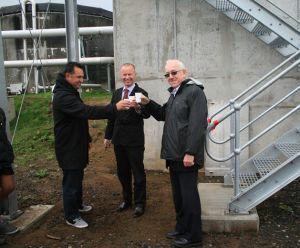 The South Taranaki District Council has announced the opening of the $2.1m Eltham water treatment plant with the installation of a clarifier as well as sophisticated chemical and control systems.

The work follows upgrades that were made to the Opunake and Rahoutu water treatment plants.

Mayor Ross Dunlop said that a huge amount of time and money has been invested by the council into upgrading and modernising the district’s water supplies, and Eltham is the latest to benefit from its water infrastructure upgrade programme.

"Since 2005, the main priority of the Council has been on improving the district’s water infrastructure. Over the last eight years, we have completed nearly $56.3 million of work," Dunlop added.

In the last five years, $4.85m has been spent improving Eltham’s water supply. The existing reservoir was strengthened by building a new reservoir, and a new steel water main and other associated works were also completed.

The $11m Waimate West upgrade will be the final water infrastructure project in the district, and is slated for completion in August. Waimate West is South Taranaki’s largest water supply by volume, supplying 800 farm connections and the towns of Manaia and Kaponga.