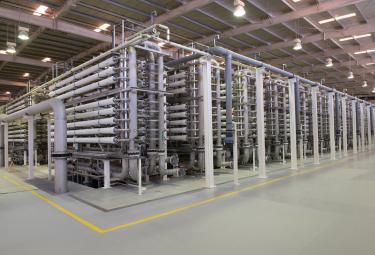 GE Power & Water, a unit of US conglomerate General Electric, has signed an agreement to install an advanced membrane technology at Sulaibiya Wastewater Treatment and Reclamation Plant in Kuwait.

According to the agreement, GE will provide ZeeWeed 1000 submerged hollow-fiber membranes and AG LF low-fouling reverse osmosis (RO) membranes for the facility. The installation of the membrane technology is expected to increase its daily production capacity from 375,000m3 to 600,000m3.

Kharafi National will be responsible carrying out the expansion of the facility.

"Kuwait today is serving as a model by meeting its water requirements through investments in water infrastructure, headlined by the Sulaibiya plant."

GE Power & Water president and CEO for water and process technologies division Heiner Markhoff said: "Kuwait today is serving as a model by meeting its water requirements through investments in water infrastructure, headlined by the Sulaibiya plant.

"With demand for water increasing at an estimated six percent annually and Kuwait having one of the world’s largest per capita consumptions of water, Kharafi National is focused on strengthening wastewater treatment capacity to meet water reuse goals in non-potable and industrial applications, alleviating the pressure on more pristine desalinated water supplies."

After completion of the expansion, the facility will become the largest membrane-based wastewater treatment facility in the world, the company claimed.

Kharafi National corporate director Ibrahim Al-Ghusain said: "In 2004, when the project was commissioned, it was the world’s largest to use reverse osmosis and ultrafiltration membrane-based water purification, also provided by GE.

"Through this expansion, we are taking our facility to the next level by continuing to use the most modern technologies available."

The immersed ZeeWeed 1000 ultrafiltration membrane system, to be installed at the plant, will facilitate in direct filtration, coagulation, tertiary filtration, multi-media filter retrofits and pretreatment for Reverse Osmosis.

It will enable the treated water from the plant to meet stringent water standards, while ensuring less use of chemicals, reduced costs, lower environmental impact and less residual wastes as compared to the conventionally used water treatment systems.