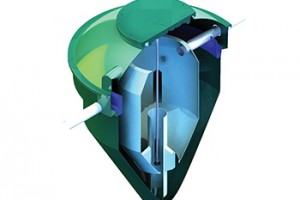 The approval makes the WPL innovation the only compact sewage treatment plant in Germany which processes wastewater in a single tank with two compartments.

This eliminates the requirement for a primary tank or pre-treatment for sewage at the facility.

Previously, WPL Diamond had received approval for the implementation of a screen box in the system which facilitated pre-treatment. The recent approval outdoes the earlier version of the sewage treatment technology in compliance with the DIBt regulations.

Claimed to be cost-effective and easy to install, the plant can be used for residential and commercial properties, WPL said.

It can also be used for replacement of the now-illegal septic tanks in eastern Germany which was popularly used in the past.

Other positives promised by the WPL Diamond sewage treatment plant are that it is odourless, creating minimal visual impact since it can be buried underground.

Besides being environmental friendly, the absence of internal mechanical moving parts in the plant also eliminates annual maintenance costs.

Image: WPL Diamond is the only DIBt approved compact sewage treatment plant that does not need primary tank. Photo: Courtesy of WPL Limited.