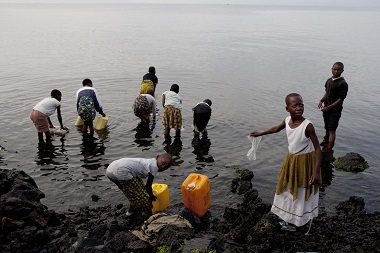 Around 768 million people still do not have access to safe water according to UNICEF and WHO estimates. Most of these people are poor and live in remote rural areas or urban slums.

UNICEF has revealed that nearly 1,400 children under the age of five die every day from diarrhoeal diseases caused by lack of safe water, adequate sanitation and hygiene.

The organisation is organising WASH programming in over 100 nations, as well as new initiatives such as cost-effective drilling and community based water safety planning that aim to bring safe water to families living in isolated regions.

UNICEF global water, sanitation and hygiene programmes head Sanjay Wijesekera said that each and every child has the right to survive, the right to health, and the right to a future.

"The world should not rest until every single man, woman and child has the water and sanitation that is theirs as a human right," Wijesekera added.

The UN General Assembly has declared that safe drinking water and sanitation is a human right, and Millennium Development Goals for safe drinking water were achieved in 2010. Of the global population, 89% have access to improved sources of drinking water including piped supplies, boreholes fitted with pumps and protected wells. However, this access is still being denied to the world’s poorest, including in middle-income nations.

UNICEF also stated that lack of access to safe water disproportionately affects women and young girls, who carry around 71% of the burden of drinking water collection.

Image: Around 1,400 children under the age of five die every day from diseases caused by lack of safe water. Photo: courtesy of UNICEF.