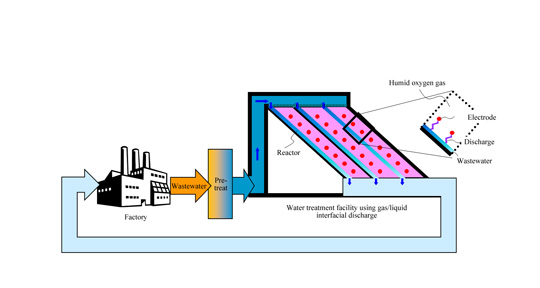 When the water flows through the plates, a pulsed corona discharge generated at the interface of the humid oxygen gas and wastewater which produces OH radicals, a strong oxidant with an oxidation potential of 2.85 eV, compared to 2.07 eV for ozone.

With the OH radical’s high reactivity, persistent substances such as surfactants or dioxane decompose into carbon dioxide, water molecules and other inorganic compounds, the company said.

They claimed that the generation of OH radicals helps the system treat water twice more efficiently compared the conventional advanced oxidation processes, such as the combined use of ozone and ultraviolet irradiation (O3/UV).

Mitsubishi Electric also added that the use of oxygen gas is reduced significantly by up to 90% due to gas recycling.

The company is developing the technology jointly with Yasushi Minamitani, an associate professor at Graduate School of Science and Engineering, Yamagata University. They are planning to apply its technology in practical industrial wastewater and sewage reuse systems.