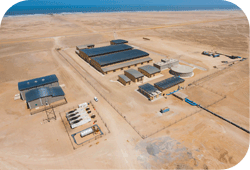 Namibia is likely to increase the capacity of Areva’s water desalination plant after acquiring it from the French company.

Preliminary discussions for the change of ownership have started between the Namibia Government and the Paris-based firm, reports Bloomberg.

Areva had constructed the 20 million cubic metre facility to secure supplies for its Trekkopje uranium project, which stopped operations in 2012 owing to a drop in nuclear fuel prices.

Namibia’s Ministry of Agriculture, Water and Forestry deputy permanent secretary Abraham Nehemia was quoted by Bloomberg as saying: "If we need more water, naturally we have to raise capacity.

"We will have to see how we handle supplies within the existing capacity first."

Areva managing director for Namibian unit Hilifa Mbako was cited by the news agency as saying: "With the current infrastructure, we can go up to 26 million cubic metres by adding another pump.

"With a new infiltration set-up, we can bring it up to 45 million cubic metres."

"If we need more water, naturally we have to raise capacity."

Mbako added: "There is no specific date yet.

"What we are sure of is Areva is selling the plant and the government will buy it next year."

The south-western African nation suffered its worst drought in 30 years, with its chief water resources Omaruru delta and Kuiseb aquifers drying up.