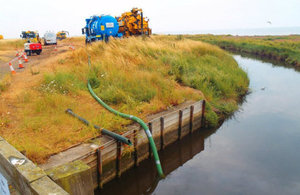 The UK’s Environment Agency (EA) has fined Southern Water Services £500,000, after the agency’s investigation found the firm guilty of releasing untreated sewage into the Swalecliffe Brook.

The sewage release polluted and killed regional wildlife along a 1.2km stretch of the watercourse, which flows through the Thanet Coast Site of Special Scientific Interest (SSSI) and later joins the north Kent coast to the east of Whitstable.

Southern Water is said to have failed to respond or amend the sudden discharge that took place on 21 July 2013 through the emergency outlet of Brook Road Wastewater Pumping Station.

The investigation revealed that the pumping station had faced operational issues in the week leading to the accidental discharge.

Water quality monitoring revealed high levels of pollution along the brook with poor levels of dissolved oxygen, which resulted in 249 fishes being killed, including 155 critically endangered eels.

"Water quality monitoring revealed high levels of pollution along the brook with poor levels of dissolved oxygen, which resulted in 249 fishes being killed, including 155 critically endangered eels."

EA environment manager Alan Cansdale said: "Southern Water has acknowledged that they had sufficient warning and knowledge of the incident to minimise the impact on the local environment, but failed to act swiftly and notify partners to help this happen.

"This incident, and the scale of the subsequent environmental impact, was a result of inadequate urgency to recognise there was a problem at the site."

Canterbury City Council environmental health officer Sarah Maloney said: "We were pleased to be able to work in partnership with the EA in this case.

"The good reputation of our shellfish industry is very important to local businesses and the council.

"We work hard all year to ensure our residents and visitors are able to enjoy local shellfish safely, so it’s vital we can respond to pollution events such as this promptly and effectively."