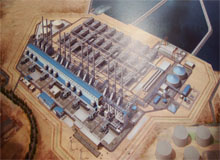 The plant, SWRO-4, is being built by the Power & Water Utility Company for Jubail and Yanbu (Marafiq) in Jubail city of Saudi Arabia.

SWRO-4 will use reverse osmosis (RO) membranes to desalinate seawater, and will have a capacity to process 100,000m³ of potable water a day.

The output will be greater than the combined output of 77,000m³ a day from the five desalination plants that Marafiq currently owns and operates in Jubail.

The desalinated water from the new plant will be supplied to the Jubail area, which is one of the two major industrial cities in the country.

Under the contract, Yokogawa will supply CENTUM VP integrated production control system and the Plant Resource Manager (PRM) integrated device management package and will also be responsible for the entire project, including the engineering and commissioning of these products.

The PRM will be used for the monitoring and online diagnosis of the instrumentation devices in the plant.

The company will also supply an operator training system to improve operator performance.

It is scheduled to begin operation at the end of September 2014.