2,646 membrane fibres per element, 64 elements per cassette, 6 cassettes per train

The Kamloops plant is the largest operating facility in North America to use membrane treatment, with a treatment capacity of 160,000m&#179;/day and the installed hydraulic capacity to expand to 200,000m&#179;/day. 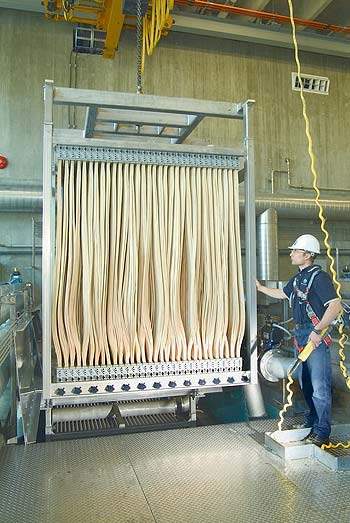 One of the membrane cassettes. Each cassette comprises 64 elements, each one containing 2,646 individual membrane fibres, with a nominal pore size of 0.04&#181;. 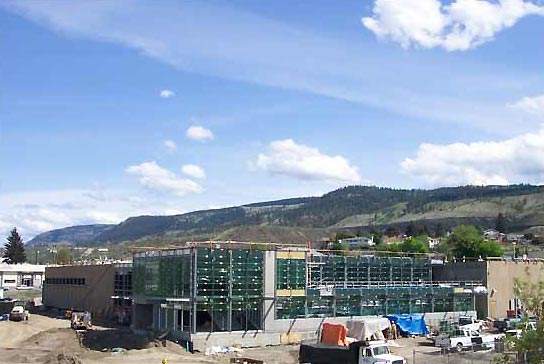 The plant under construction. Work began in March 2003 and was completed by the end of December 2004. 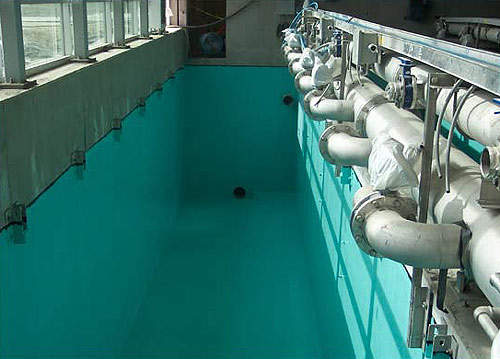 One of the membrane tanks during construction. 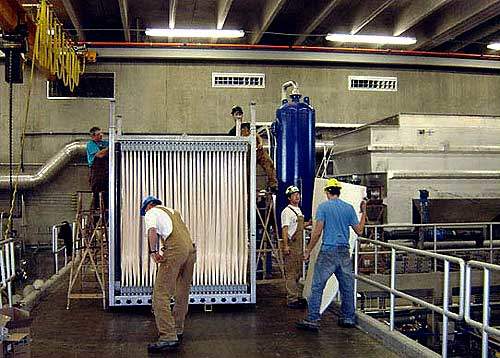 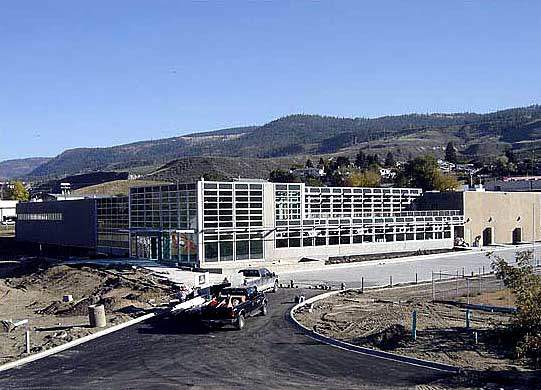 The water treatment plant nearing the end of construction. 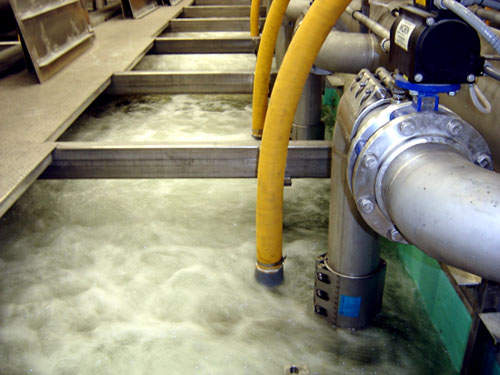 One of the membrane tanks being aerated. Membrane cleaning takes place by a combination of tank aeration at ten-second intervals and a 30-second back-wash occurring every 15 minutes.

When the City of Kamloops’ new plant opened in February 2005, it became the largest operating facility in North America to use membrane treatment. The advantage of membrane filtration system is that it is maintained in cassettes, which can be easily replaced. Built between March 2003 and December 2004 at a cost of $48.5m, the last remaining connections to the system were completed in 2006. The final part of the city’s comprehensive water supply improvement scheme – a $2m programme to flush out the accumulated sediment in 350 miles (560km) of water mains – was completed in 2008.

The project which was undertaken in response to the need to improve water quality, reduce turbidity, exclude water-borne organisms and achieve colour and total organic carbon (TOC) removal, uses membrane technology by Zenon (acquired by GE Infrastructure Water & Process Technologies in June 2006). The current daily treatment capacity is 160,000m³, though the plant design has a higher installed hydraulic capacity to allow future expansion to 200,000m³/day.

Kamloops lies on the confluence of the North and South Thompson rivers, some 200 miles (325km) from Vancouver and 300 miles (490km) from Banff. The city draws its water from the South Thompson River, the earliest municipal water supply system beginning in 1895 with a series of wooden pipes and street taps. In 1919, the first pumping station was constructed on the River Street site, which was subsequently replaced in 1972 and further upgraded nine years later.

Until the construction of the new plant, water treatment consisted of a 3mm screen at the intake, followed by chlorine dosing prior to distribution. Despite some settling in the chlorine contact reservoir, the high levels of sediment in the river, particularly during the spring when turbidity could occasionally exceed 100 nephelometric turbidity units (NTUs), at times led to residents being supplied with water that was visibly cloudy.

“The Tournament Capital of Canada of over 120 major events brings 25,440 visitors annually to a town with a resident population of 80,000.”

Known as the “Tournament Capital of Canada” – over 120 major events bring 25,440 visitors annually to a town with a resident population of 80,000 – the provision of quality potable water is of considerable importance. In addition to the high turbidity, there were concerns over incomplete chlorination, the persistence of Cryptosporidium and Giardia, and the production of disinfection by-products.

To address these issues, the City of Kamloops formed a Public Advisory Committee on Water Quality in 1997, which subsequently recommended advanced water treatment to enable the city to comply with the Interior Health Authority’s requirement for improved drinking water quality. For two years, a variety of possible solutions were investigated, such as finding a new source or using bottled water during periods of high turbidity. At the end of this evaluation, in September 2001, the City Council
formally selected membrane filtration as the preferred option.

The plant design contract was awarded two months later and Zenon were chosen to provide the membrane systems in September 2002. Construction began six months later and the new plant was constructed adjacent to the existing pumping station.

Raw water is pumped from the South Thompson River and screened at the low lift pumping station. Coagulant is subsequently added upstream of the plant’s flocculation tanks to coagulate organic matter contained in the inflow.

This water then enters the primary membrane tanks. The system itself comprises a two-stage ultra-filtration (UF) membrane process, the primary filtration stage consisting of 12 parallel trains, with six ZeeWeed® 500 membrane cassettes per train. Each cassette comprises 64 elements, each one containing 2,646 individual membrane fibres, with a nominal pore size of 0.04µ. This arrangement currently provides a net permeate of 160,000m³/day and installing additional membrane units to the modular design will permit easy future expansion. Membrane cleaning takes place by a combination of tank aeration at ten-second intervals and a 30-second back-wash occurring every 15 minutes.

“The TRU centre is the first ever sited at an operational water treatment plant in North America.”

Designed to filter the primary reject stream – which accounts for around 8% of the original inflow – the secondary stage has a capacity of 12,500m³/day and the effluent from this train is returned to the influent end of the primary stage for re-filtration. This arrangement both minimises the volume of wasted water from the plant and significantly reduces raw water pumping costs.

After passing through the membrane array, the water is finally disinfected with hypochlorite solution formed on-site by passing electric current through brine. The plant has the design flexibility to add ultra-violet disinfection in the future.

The membrane system is designed to process 99% of the raw water inflow to the plant – exceeding the potential of conventional sand filtration, though at higher operational cost. The rejected 1% passes to the plant’s dissolved air flotation (DAF) tanks, and is skimmed and centrifuged to remove residual solids before being used for irrigation purposes.

In addition to the provision of a state-of-the-art treatment plant providing high quality potable water, the project also involved a number of other features. The design of the plant drew heavily on green technology, incorporating a variety of novel and innovative techniques to minimise the environmental impact. Watershed protection measures aimed at securing the current water source were also implemented.

The plant also hosts an important educational facility, the Thompson Rivers University (TRU) Water Education and Research Centre, which is the first ever sited at an operational water treatment plant in North America, providing a venue for water quality research and training.

The plant is owned by the City of Kamloops. The new plant was designed by Stantec Architecture and Urban Systems and constructed by Graham Construction & Engineering. Zenon Environmental (now, part of GE Infrastructure Water & Process Technologies) provided the membrane system and ancillary equipment.

The associated training facility is a partnership of Kamloops, GE Infrastructure Water & Process Technologies and the University College of the Cariboo / Thompson Rivers University. Project funding came in a variety of forms from the Water Utility Fund, the Canada-British Columbia Infrastructure Program, the Federal Government and the Municipal Finance Authority.