Water Development Department of the Ministry of Agriculture, Cyprus 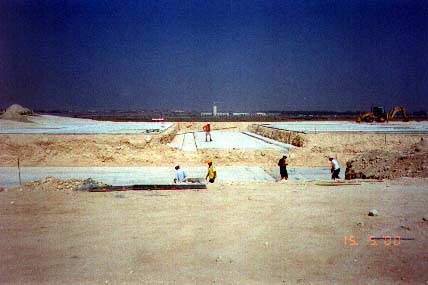 Construction of the desalination plant began in 1999. 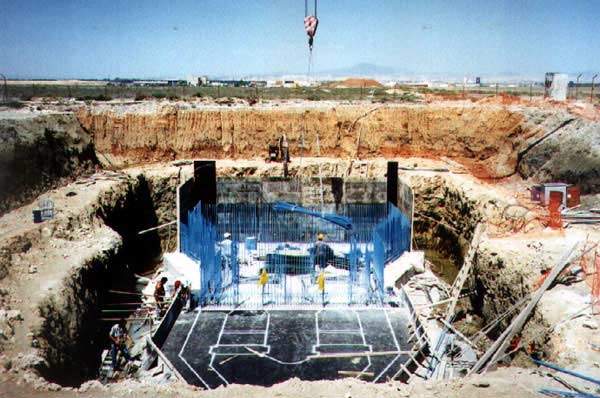 The seawater pumping station under construction. 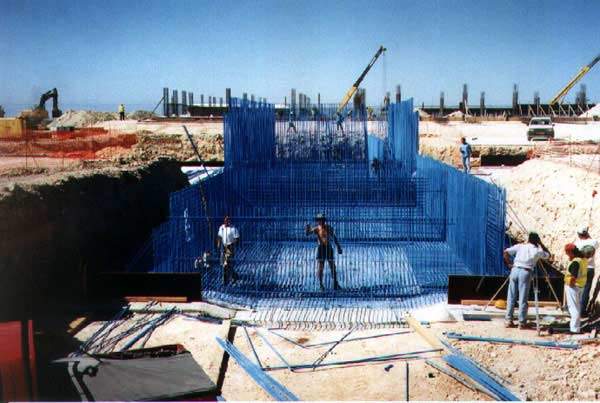 The water plant at Larnaca was protected with epoxy coated reinforcement. 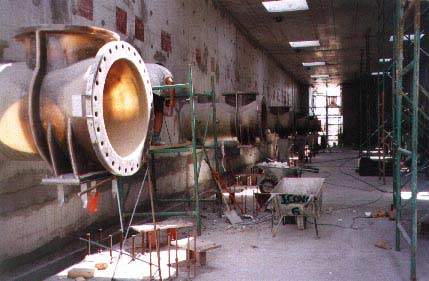 Large pipes were imported to filter the water. The output capacity was upgraded to 54,000m³/day. 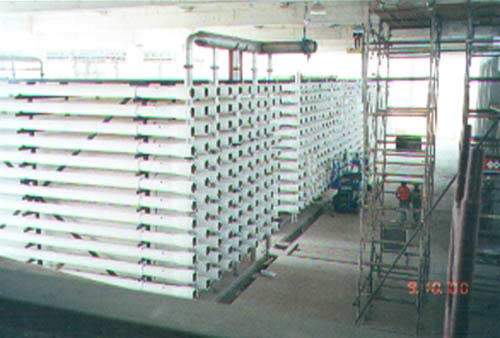 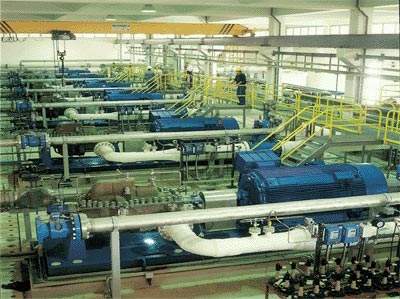 Built near Larnaca airport, this is the largest desalination facility in Cyprus. The plant has six treatment trains, five for seawater RO and the sixth as secondary permeate treatment. 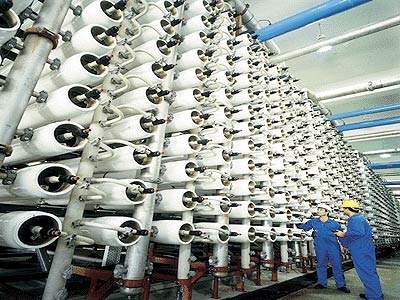 In February 1999, IDE was awarded the build-own-operate-transfer contract to supply 40,000m³ of desalinated water daily by the Water Development Department of the Ministry of Agriculture, Cyprus. When the contract period expires in 2011 the Larnaca seawater reverse osmosis (SWRO) plant will become the property of the Cypriot Government, who also has the option to purchase ahead of this date, exercisable at six-months’ notice.

Subsequently upgraded to 54,000m³/day, it is the largest, desalination facility to be built in the country, occupying some 1.6ha (four acres) of land near to Larnaca airport. Construction began in December 1999 and was completed in March 2001. The plant opened in April 2001.

Also included in the work was the provision of a seawater pumping station for a daily intake of 80,000m³, the laying of over 2,000m of intake and outfall pipelines, together with the dredging, undersea excavation and removal of 120,000m³ of sand and rock.

Larnaca also introduced the membrane management system, which helped the plant to produce 7% more water in 2007 than the existing production with 2% less energy annually consumed.

The Larnaca desalination plant received the 2007 Best Innovation Award in the manufacturing sector from the Industrial Federation of Cyprus.

Traditionally, underground reserves have been the main source of water for both drinking and irrigation purposes. By 1970, over-pumping driven by increased demand had left almost all of the country’s aquifers seriously depleted and many of those in coastal areas were suffering sea intrusion.

For more than 20 years, Cyprus has been embarked on a programme to safeguard and improve its water supply, including the construction of water treatment plants at Khirokitia, Kornos, Limassol Tersephanou and Asprokemmos and self-contained units at Athienou.

“The Larnaca plant is the second and largest desalination facility in Cyprus.”

However, despite these developments, Cyprus still faced chronic water shortage, which was exacerbated by prolonged droughts and growing consumption.

The government decided to explore alternative solutions to meet the burgeoning needs of the major towns and tourist centres, leading to the country’s first desalination plant becoming operational at Dhekelia in April 1997. Larnaca followed and, on 25 August 1999, the Council of Ministers decided to build a 20,000m³ facility at Zakaki to serve Limassol.

To address environmental concerns and issues of land ownership, the plant itself has been located some distance from the shoreline and is served by a long offshore seawater intake. Flocculation and low velocity dual-media gravity filters pre-treat the feed water from the deep-seated open intake, ahead of a low flux reverse osmosis desalination process, which uses a partial second stage of membranes to ensure the required quality standards.

The prevalence of algae along that part of the coast required the intake to be constructed 1,100m from the shore and at a depth of 11m to ensure a clean seawater feed. The pipeline is HDPE with an outside diameter of 1.2m and is capable of supplying the plant with 80,000m³/day, providing enough for both the production of 64,000m³ desalinated product water and the routine filter backwashing required. The rest of the feed and brine distribution system is made of high-grade stainless steel.

Particles larger than 2mm are removed from the inflow by a rotary screen. Four vertical pumps, chosen for their long track-record of success in similar applications and their high degree of flexibility in operation, deliver the water to the flocculation chamber. Within the pipeline, the flow is dosed with flocculent together with sulphuric acid to adjust the pH and ferric sulphate as coagulant. This reagent dosing is controlled by dual monitoring systems, which act as mutual safeguards to ensure that the seawater arrives at the flocculation chamber in optimum condition for treatment.

“The Larnaca plant has been designed to ensure that power consumption, a major factor affecting product water pricing, is reduced.”

The pre-treatment phase comprises two flocculation chambers equipped with low speed rotary agitators and 12 gravity filters, which use quartz sand and anthracite dual media. Each is equipped with a patented backwash device, which uses brine pumped along a dedicated line from energy recovery turbines associated with the high pressure intake of the reverse osmosis units. The filtered water collects in a tank from which four booster pumps drive the water through 10µ filters before it passes to the desalination membranes via high-pressure pumps.

The Larnaca plant has been designed to ensure that power consumption, one of the major factors affecting product water pricing, is reduced. Variable frequency converters enable the suction pressure to be adjusted over a wide range in response operational demands and Pelton turbines are used to recover the energy from the brine stream.

In keeping with the project’s general drive to ensure reliability and continuity of operation, while also working to a low water sale price, extensive performance monitoring has been put in place. Each high-pressure pumping station is equipped with instruments to give accurate measurement of power consumption, feed and brine flow.

The pressure in the suction and discharge lines is monitored along with the vibration and temperature in almost all bearings and couplings. The designed power consumption for the desalination process itself only is 3.4kWh/m³ of product water with an overall power consumption, including all pumping, of 4.35kWh/m³.

Each of the plant’s five RO trains has a rated production of 9,000m³/day while the newly installed RO train has a capacity of 10,000m³/day. Each RO train consists of 120 pressure vessels arranged in 12 rows and contains eight SWRO membranes apiece. The desalination system is equipped with two product collection points, one at the front and one to the rear of the pressure vessels.

All of the trains are connected to an automatic membrane flushing system, which has been sized to clean one RO train at a time. The system includes two pumps, an electrically driven one for normal use and a diesel pump to provide brine replacement and permit the pressure vessels to be flushed in case of power failure.

“The goal is to enhance the performance of the first stage SWRO, thus impeding the operation of the second-stage BWRO.”

After passing through the energy recovery turbines, the brine collects in an equalisation tank where any foaming is broken down before it flows under gravity to a storage facility, 750m from the seashore. From here it is ultimately discharged 1.5km offshore at a depth of 18m.

The desalinated product water is further treated by the addition of dissolved calcium carbonate to adjust the calcium and bicarbonate ions and to improve palatability.

Finally, pH adjustment and chlorination complete the treatment process, the finished water then collecting in a 4,200m³ tank before being pumped 12km to storage.

The goal is to enhance the performance of the first stage SWRO, thus impeding the operation of the second-stage BWRO (dedicated to boron removal) for more than four months of the year.

In 2002, a study was undertaken with a view to maximise the plant’s cost-efficiency. It examined the inter-relationships between the major contributory factors, including membrane function, pressures, flows, temperatures, pH, chemical addition and water quality. As a result of this initial investigation, it was decided to explore the scope for increasing water output and minimising production costs, while maintaining the specified water quality.

Use of the software has enabled a sustainable 5% reduction in power consumption in the RO process, and a simultaneous 5% increase in product water output.

Larnaca Desalination Partners, an IDE Technologies and Oceana Advanced Industries JV, are the plant’s operators. Oceana was responsible for much of the civil engineering and marine construction. Tata Projects installed and commissioned the mechanical systems, Calder provided the turbines and Ingersoll-Dresser supplied the HP pumps.