3 x vertical, close-coupled centrifugal with submersible motors; fourth to be installed in future

Firm Capacity (one pump out of service)

Federal Environmental Protection Agency via the Oklahoma Water Resources Board 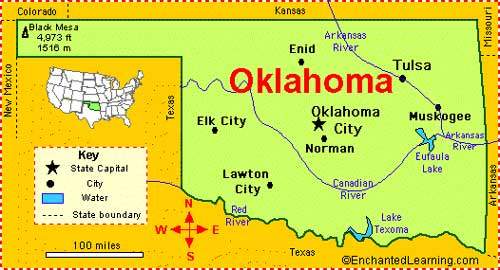 Placing the first slab in the aeration basin. 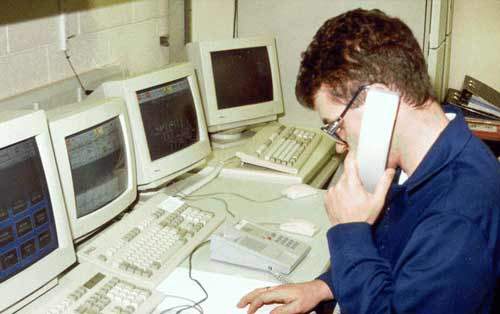 The sheeting soil anchors in the aeration basin. 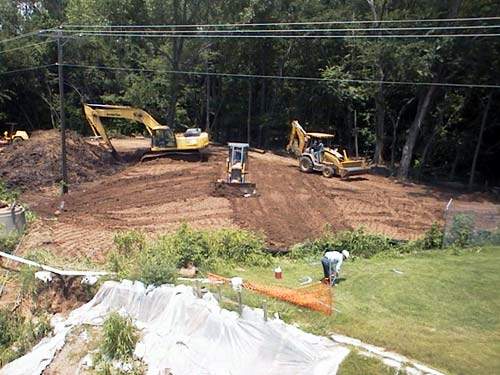 Landscaping work at the plant. The project's environmental impact was an important consideration in gaining EPA grant aid. 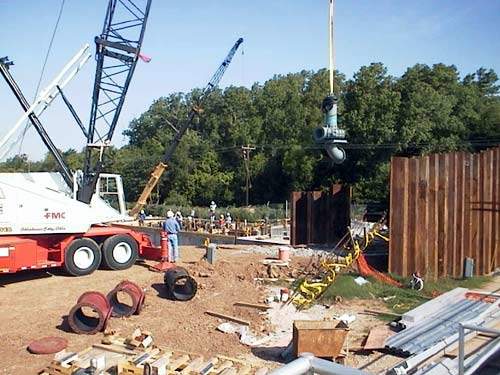 Lowering one of the new pumps into place. 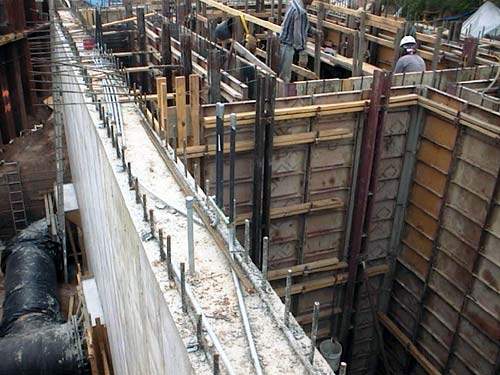 A number of bar screens feature in the plant design, chosen for their operational reliability and low loss of head. 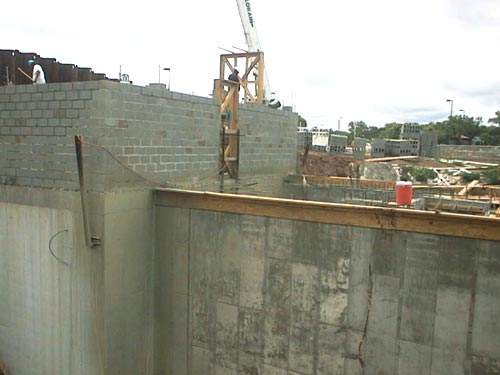 Construction in progress at the Westside Lift Station. 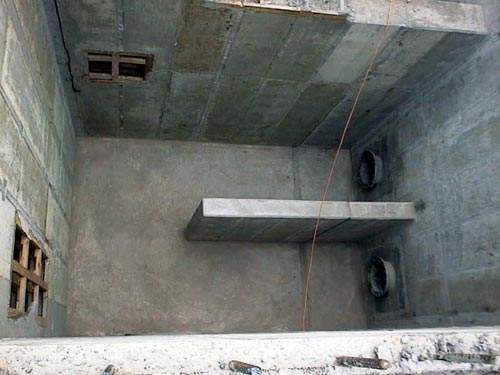 The new lift station uses a drywell / wetwell design and is equipped with submersible motors and variable speed drives. 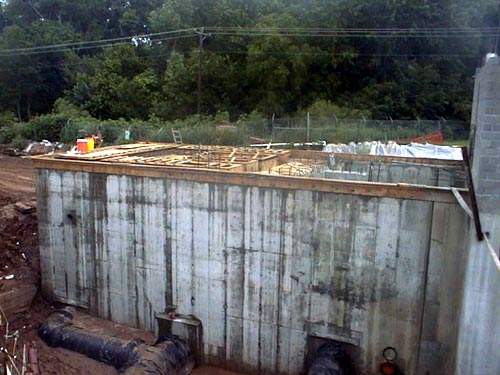 View of the wetwell structure. 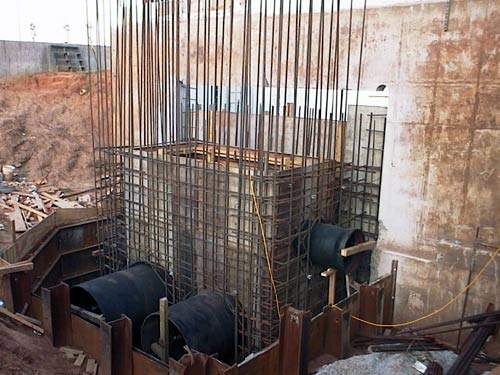 Construction of the influent junction box - on the east side of the now abandoned screw pump station structure. 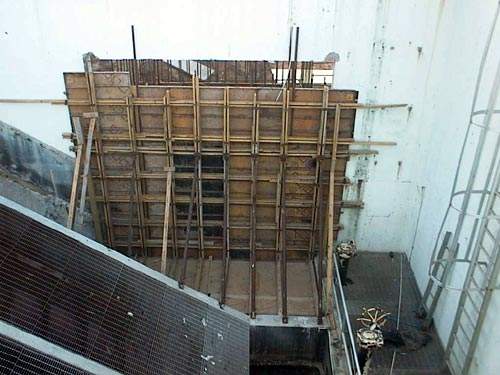 Looking inside the new influent junction box construction. Ultimately it will open directly into the bar screen channels.

The Norman wastewater system is owned, operated and maintained by the city of Norman, Oklahoma, US. The system includes around 375 miles (600km) of collection piping system, a wastewater treatment plant (WWTP) and 12 lift stations. Opened in 1991, the plant serves a population of 82,110. It has an annual discharge flow of 12mgd.

The treated effluent is discharged into the South Canadian River. The city developed a comprehensive 20-year plan for capital improvements of its wastewater system due to an expanding city population and the need for a more efficient system.

The plant improvements completed in 2005 represent the latest part of a major programme of expansion and refurbishment, which began in 1998. Ideal Construction was awarded the contract by Norman Utilities Authority (NUA) in April 2003.

Construction began on 8 June 2003 and the plant improvement works were completed in October 2005.

Completion had originally been scheduled for August 2004 before being extended in October 2003 to January 2005.

The current project has added a further $5m to the $12.5m phase 1 cost. In March 2007, NUA awarded a contract under the Sludge Handling Improvements Project to Walters-Morgan Construction. The scope of the project includes digester cover improvements, a non-potable water system, effluent flow measurement, digester mixing improvements and sludge handling improvements. The total contract value is about $6.42m. The project was 98% complete by January 2010 and is expected to be completed by March 2010.

A combination of ageing plant, limited capacity, burgeoning population and increasingly stringent regulatory standards necessitated the program of improvement. The original work included the construction of three new aeration basins, a blower building, two new secondary clarifiers and a new sludge pump station, together with upgrades to the electrical system and process control.

“The Norman wastewater treatment plant serves a population of 82,110.”

Phase 1 was completed in May 2000 and increased the plant’s hydraulic capacity from 30,000m³ a day to 45,000m³ a day. When fully completed, the upgrade program will have further extended this to a final capacity of nearly 100,000m³ a day.

The Headworks facility was constructed in 1964 and the improvements required were originally intended to have been included in the earlier work, but funding constraints delayed its upgrade until the current round.

The performance of the preliminary treatment will be enhanced, principally by minimising the abrasive material carried to the downstream processes, which increases wear on the sludge pumps, shortens their life expectancy and increases the frequency of digester cleaning.

Built in 1972, the Westside lift station had reached the limits of its capacity, its pumps being unable to meet the demands of wastewater inflow from the Brookhaven Creek and Normandy Creek basins during times of extreme rainfall. As a result, it was recommended for replacement in the area’s Wastewater Master Plan.

These improvements have been partially funded by grants from the Environmental Protection Agency (EPA) through the Oklahoma Water Resources Board (OWRB). In order to obtain this grant funding, the wastewater planning and associated environmental provisions required EPA / OWRB approval, which delayed the commencement of construction by 12 months but ultimately led to the provision of nearly $2.5m towards the work.

The work included the installation of an influent splitter box for the four incoming interceptors, two self-cleaning mechanical screens and conveyors within the existing pump station building, and the construction of two vortex-type grit chambers for sand and gravel removal.

“The project is expected to be completed by March 2010.”

An aerated grit removal system had been originally recommended but the alternative was selected for the final design on the basis of lower cost and similar operational performance. Influent flow metering was fitted to the Westside lift station, along with three centrifugal pumps and two new self-cleaning mechanical screens with screenings conveyors.

Studies have determined that the hydraulic characteristics of the four influent sewers allow for gravity flow directly into the new headworks facility, which eliminates the need for the existing pump station. As a result, the pre-existing screw pumps are to be decommissioned as part of the project and the new influent junction box was constructed on the east side of the abandoned structure.

Each influent line was equipped with sluice gates, which will be open under normal circumstances but can be closed periodically to divert the flow from each line through a new 45cm (18in) bypass line to the equalisation basins. The splitter box will measure this and divide the flow between the primary treatment trains.

The two new step screens installed in the screw pump station structure were selected because they offer the highest open area of any bar screen (73%) and the lowest loss of head, which is a critical aspect in the overall hydraulic design of the project. In addition, their reliability, low power consumption, reduced maintenance requirement and long life significantly improve operational costs.

The new lift station design is a drywell / wetwell type with three vertical close-coupled centrifugal pumps, equipped with submersible motors and variable speed drives. Provisions were made for a future fourth pump. Two-step screens upstream will exclude debris from the wastewater prior to pumping and a transit-time flow meter on the influent line will monitor the Westside sewer inflow.

Two new submersible pumps, each with a nominal 5.6 million cubic metres per day capacity, were installed in the existing sump at the equalization basins to return water to the headworks and a new 0.4m force main was constructed to tie into the existing main.

NUA owns and operates the plant, and the Federal Environmental Protection Agency provided funding through the Oklahoma Water Resources Board. Project design was by Camp Dresser and McKee, with Ideal Construction as the main contractor for the project. BRB Contractors was responsible for the first phase.

“Walters-Morgan Construction is the contractor for the Sludge Handling Improvements Project.”

Electrical and instrumental work was done by Oil Capital Electric and Bauman.

Walters-Morgan Construction is the contractor for the Sludge Handling Improvements Project.