Pump house constructed for the distribution of drinking water in Saint Marc.

People collecting potable water from a water kiosk in the town of Les Irois.

Ongoing work on the drainage and sewerage system. 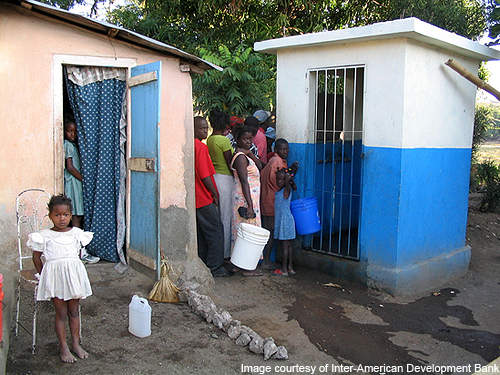 People gather to collect water from a water kiosk.

70% of Haiti’s total population of over nine million (2009) resides in rural areas. Access to safe and reliable drinking water is not available to half of the population. To overcome this problem, the Haiti rural water and sanitation project was approved in January 2007. It is expected to be completed by December 2011.

The project includes feasibility studies and design, construction and expansion of drinking water and sanitation systems, water source protection and supervision of works.

The sanitation project is being executed by the state-owned National Directorate of Water Supply and Sanitation (DINEPA) and the National Service of Drinking Water (SNEP). Upon completion, the project will be handed over to the Government of the Republic of Haiti.

The contract to provide support and technical advisory services to rural communities during the project cycle was awarded to engineering firms LGL SA, SNC-Lavalin, and Burgeap. Rehabilitation works in St Michel-Dimizaine and Cavaillon-Maniche-Simon are being carried out by Soheco. Cota is responsible for rehabilitation works in Arniquet / Chantal  sector.

“Access to safe and reliable drinking water is not available to half of the population of Haiti.”

The water and sanitation project is being financed by the World Bank, the Inter-American Development Bank (IDB), the Spanish Fund and other NGOs.

The Spanish Cooperation Fund for Water and Sanitation in Latin America and the Caribbean sanctioned $10m in April 2010 for improving water supply in rural areas. The World Bank advanced $5m through its State and Peace-Building Fund.

The IDB sanctioned a loan of $15m and was also responsible for providing technical assistance, developing the project in association with the Haitian Government and monitoring the execution of the project.

Water requirements in rural areas are met through protected and unprotected springs and rivers, rainwater, wells,  public fountains and the purchase of water buckets.  Rural communities depend heavily on unsafe water sources such as irrigation water, water run-off and river water.

The country does not have a sewer system and most of the residents use rudimentary toilets. To overcome these problems, a framework law was prepared by the Haitian Government.

Purpose of the rural water project

Only 30% of the total population of Haiti have access to sanitation facilities and 54% access to water, the lowest access rate in Latin America and the Caribbean. According to the UN’s  Millennium Declaration 2000, Haiti’s drinking water coverage level is to be brought to 69.5% and  sewerage coverage to 61% by 2015. To achieve this goal, a total estimated fund of $1,027m needs to be invested between 2000 and 2015.

The project was designed to increase the water supply and sanitation services access levels in rural communities. The main purpose of the project is to provide better sanitation and hygienic facilities, increase safe drinking water supply, and enhance the capacity of SNEP, local water committees and professional operators in cooperation with the local government.

The project will be implemented in two elements. While the first one strengthens the SNEP, the second provides services directly to participating communities.

The first element is further divided into four activities:

“Upon completion, the sanitation project will be handed over to the Government of the Republic of Haiti.”

The second element is intended to promote water supply, and basic sanitation and hygiene. This includes identification of the participating communities, providing engineering design, and system construction, support and supervision.

An innovative management approach will be adopted in cost recovery, metering, and promoting water booths instead of standpipes. Water to the metered water booths and house connections will be supplied by piped systems. Under this element, investments will also be made for hand pumps and rainwater harvesting systems.

The project is not expected to cause any major negative environmental impact. The only likely adverse impact is the generation of greater amounts of wastewater as a result of the increased and  improved water supply. The risk, however, will be kept low by building small-scale sanitation networks.

The project is expected to have a great social impact. The quality of life in general, and particularly of women and children will improve as a result of improved water supply and sanitation facility. It is also expected that the project will reduce child mortality rate and the incidence of disease.