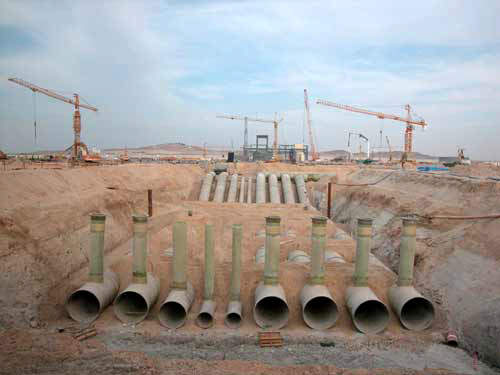 The start of the pipeline at the Shuweihat Desalination plant. 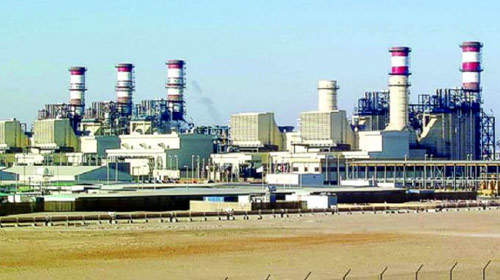 Producing 1,500MW of electricity and 100 million gallons of desalinated water a day, Shuweihat is the largest independent power and desalination project in the world

Abu Dhabi Electricity and Water Authority (ADEWA) serves a growing population, investing heavily in a range of independent initiatives to bring water to urban centres in the country’s arid environment 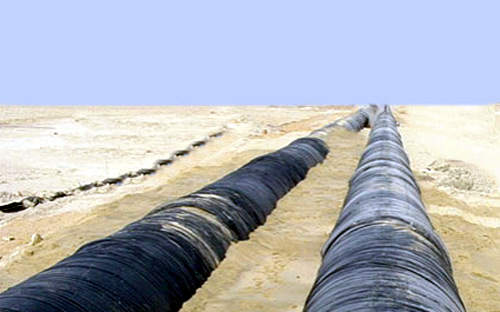 A section of the twin transmission line during construction. It runs 250km from the Shuweihat desalination plant to Musaffah in Abu Dhabi and has been laid above the natural ground-level for most of the route

Schematic of the MSF process. It is an efficient, low maintenance approach, ideally suited to the large scale applications of the Middle East 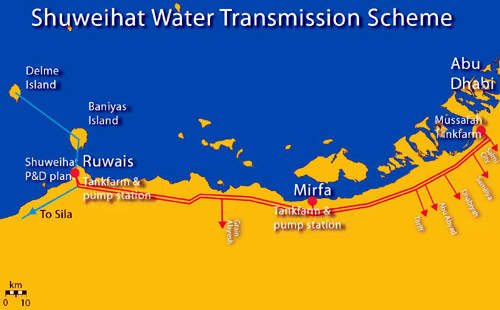 Map of the transmission scheme 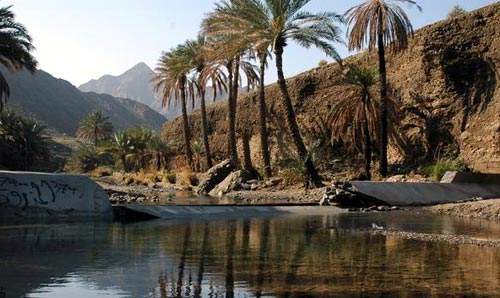 View of Al Ghail. Despite the enduring oasis images, securing adequate water is a major concern in the region, particularly since water demand had trebled since 1998

The Shuweihat Transmission Scheme, a major initiative combining one of the biggest water pipeline projects ever undertaken using ductile iron pipes with a desalination plant comprising six Multi-Stage Flash units – the largest ever built – was completed, on time, in October 2004.

The twin pipeline spans the 250km between the Shuweihat desalination plant and Musaffah in Abu Dhabi, carrying water from the new 378,000m³/day facility to join the regional supply network serving Sila, Mirfa, and Abu Dhabi via two pumping stations at Marfa and Musaffah.

The pipeline cost around $300m, the desalination plant itself $508m and the integrated electricity infrastructure at the pumping stations – which included SCADA provision – added a further $27m to the overall project cost.

“More than $10bn has been invested to develop a number of independent water and power initiatives. The Shuweihat project is the third of these and the biggest to date.”

As with the rest of the Middle East, securing adequate supplies of water has long been a major concern for the United Arab Emirates. With limited natural resources and a fast-growing economy, in 1997 the experts of the Arab Gulf Co-Operation Council concluded that a major regional water shortage was looming.

The Abu Dhabi Electricity and Water Authority (ADEWA) was established a year later to serve around 1.4 million people and over the first six years of its existence, more than $10bn has been invested to develop a number of independent water and power initiatives. The Shuweihat project is the third of these and the biggest to date – being the largest combined power and desalination plant in the world.

Today the Emirates has a water demand in excess of 2 million m³/day – having trebled in the past decade – making the contribution of the finished Shuweihat plant particularly important in meeting the needs of the local population and industry.

The plant was constructed near to Jebel Dhana, 250km west of Abu Dhabi City, adjacent to the associated Shuweihat S1 power station. The stations five dual-pressure heat-recovery steam generators feed into a common high-pressure header to drive two 250MW backpressure steam turbines. The exhaust from these is vented into a low-pressure header, which is then used to heat sea water in the desalination plant’s six Multi-Stage Flash (MSF) brine heaters.

The heated seawater then flows into a low-pressure vessel, where it boils rapidly – “flashing” into steam, which subsequently condenses on heat exchanger tubes, which are themselves cooled by the incoming feed water flow to the brine heater. The heat lost from the condensing steam helps to warm the in-flow, which improves the overall energy efficiency of the system.

Since vaporisation causes the water to cool to below boiling point, only a small amount of the influent seawater is converted to steam, so the process is repeated several times at progressively lower atmospheric pressures, allowing the water to flash repeatedly.

It is an efficient and low maintenance approach, commercially competitive and well suited to the large scale applications of the region and although reverse osmosis plants occur in greater numbers, more than 85% of the world’s desalinated water comes from MSF systems.

In addition to these units, this part of the project also saw the construction of two seawater-cooled dump condensers, seawater intake works and pump-house, a re-mineralisation plant, six 77,000m³ product water storage tanks and a potable water pumping station.

The first gas turbine was synchronised in June 2003, with distillate from the first desalination unit being produced in the September – only 21 months after site work began. The final MSF unit was commissioned at the beginning of October the following year.

The transmission element of the project was the subject of five contract lots. Lots A and B included the dual DN1600 main lines – one being used for the bulk water transfer, while the other works as a distribution line, feeding the local distribution areas.

“The contribution of the finished Shuweihat plant is particularly important in meeting the needs of the local population and industry.”

A further independent pipeline supplies the nearby small islands of Delma and Baniyas, fed by one of the pumps at the Shuweihat pumping station.

The pipelines themselves traverse salt-laden areas with a high water table for most of their route and have been principally laid above the natural ground-level, supported by extensive earthwork bunds. Where they cross pre-existing roads and oil or gas lines, the pipes have been constructed underground, using thrust boring techniques. In these sections, a polyurethane coating has been applied to the ductile iron, with conventional bitumen/zinc applied elsewhere.

The work also called for the provision of a service track road on one side of the twin line and fibre optic signal cables throughout the installation for data management. This, coupled with an extensive SCADA provision and linked to water-cooled variable speed drives at the product water pumping stations ensures optimum performance efficiency in the extreme climatic conditions of the region.

The Abu Dhabi Water and Electricity Authority was the client and the Marubeni and Taisei Corporations were the main contractors. The design engineering and project management was done by Cansult Maunsell, with Doosan Heavy Industries being the construction engineers. Fisia Italimpianti Spa supplied and installed the desalination plant and ABB provided the integrated electrical system.