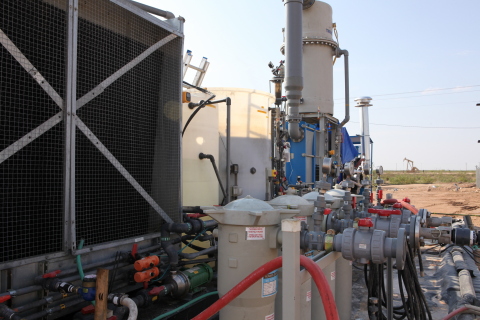 The pilot, conducted at an oil-producing factory, aimed to evaluate the performance and durability of the TurboFrac system.

The system was able to process produced water with a 72% fresh water recovery rate. It also reduced total dissolved solids from 102,000mg/l to 40mg/l.

In addition, the system reduced chlorides from around 84,000mg/l to less than 16.5mg/l. It also produced a concentrated ten pound brine of over 400,000mg/l.

STW chief executive officer Stanley Weiner said: "The ability to recycle produced water into fresh water can offer our customers both economic and environmental advantages over other treatment options and reduce the need to utilise precious fresh water resources."

ThermoEnergy chairman and CEO James Wood said that the system can recycle produced water for reuse in fracking fluids, process water to levels suitable for agriculture, or dispose of the water safely without the need for trucking to EPA-approved disposal wells.

"These systems also recover and purify the brine in produced water, a commodity that has a high economic value and use for drilling and fracking operations," he added.