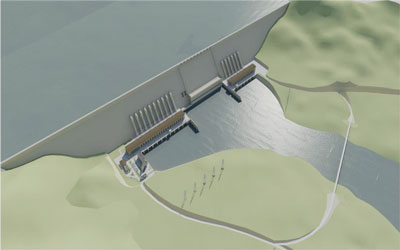 A group of international experts have reported structural design problems in Ethiopia’s plans to build Africa’s biggest hydropower dam on the Blue Nile River, the main tributary of the Nile.

They have also suggested an additional study of the dam’s impact that may have on the countries of Sudan and Egypt, BloombergBusinessweek reports.

Known as Grand Ethiopian Renaissance Dam, the facility is part of a government plan to spend ETB569bn ($3bn) on infrastructure in the five years through to mid-2015.

The dam has raised concerns in Egypt that it will cut supplies of water allocated by accords put in place more than five decades ago.

The Blue Nile is a cross-border international river, flowing from Ethiopia to Sudan and Egypt.

The project site lies at Guba in Beneshangul-Gumuz Regional Administrative State some 750km on road, north ¨C west of Addis Ababa through Debre Markos and turn to left at Kosober to Chagni¨C Guba.

There is also an alternative 850km road west of Addis Ababa, through Nekempt¨C Assosa¨C Gizen¨C Guba.

Sudan and Egypt depend on the Nile River for their water demands; however 85% of the river’s water sources are from Ethiopia.