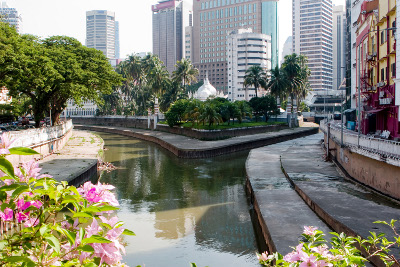 As part of the cleanup project, the company’s 100 advanced vortex separators are being installed at vital city-centre locations to filter the outflow from the network of drains and tributaries discharging into the city’s Klang and Gombak rivers.

Downstream Defender vortex seperators are designed to remove sediments, floatables and associated pollutants from stormwater. The seperators contain the sediments in an isolated storage area and has a built-in trap to retain oil and floatables.

The technology also prevents re-entry of pollutants, even under extreme surcharge conditions.

"As part of the cleanup project, the company’s 100 advanced vortex separators are being installed at vital city-centre locations."

"Installed offline in strategic locations, the Downstream Defender® is proving a perfect solution to capturing the large amounts of polluted silts that run off Kuala Lumpur’s highways and for providing "first flush" protection in intense storm conditions," Fenton added.

"In addition to capturing sediments the Downstream Defender® is also effective in trapping the large amounts of floatables, such as plastic bottles and polystyrene containers.

"In this context, the ability of the Downstream Defender® to concentrate a range of pollutants to a single, accessible location is ideal. The process of maintenance is eased significantly and all performed at ground level using conventional vacuum truck equipment."

Malaysia has launched the river system cleanup project to improve water quality, which is currently not suitable for body-contact, from 110km of the river, to a quality that is good enough for recreational use by the year 2020.

Image: The confluence of Gumbak and Klang rivers in Kuala Lumpur. Photo courtesy of Hydro International.