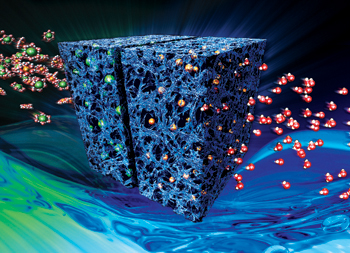 Researchers at the Lawrence Livermore National Laboratory in California, US, have developed a new capacitive desalination technique that is expected to lower the cost and time of desalinating seawater.

Capacitive desalination (CD) is a process wherein a voltage is applied between two porous electrodes to adsorb ions onto the electrode surface, thereby removing them from the stream of seawater.

The flow-through electrode capacitive desalination (FTECD) developed by the lab uses new porous carbon materials that allow the saltwater to easily flow through the electrodes themselves, as opposed to following between the electrodes and through a dielectric porous separator.

This technique leads to faster desalination, greater salt removal per charge of the capacitor, and more energy-efficient desalination.

This process is able to use a thinner separator, which reduces the overall and electrical resistance of the device and further decreases costs.

Lawrence Livermore National Laboratory scholar Matthew Suss said that the new technique is five to ten times faster when compared to earlier CD systems, and its speed can be further increased with better optimisation.