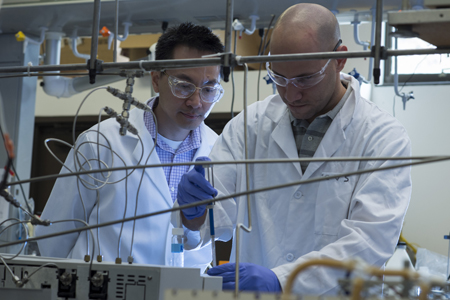 A new nanotechnology-based process to treat groundwater contaminated with chloroform has been unveiled by a group of researchers from Rice University, DuPont Central Research and Development, and Stanford University.

The researchers, who announced a full-scale field test of the innovative process, called PGClear, claimed that the combination of palladium and gold metal used in the process would destroy some of the world’s most pervasive and problematic pollutants gently and quickly.

Developed as part of a ten-year federally-funded scientific research initiative, PGClear will break down hazardous compounds like vinyl chloride, trichloroethene (TCE) and chloroform into nontoxic byproducts.

A large-scale 6ft x 8ft PGClear unit is also slated to be installed at a DuPont site in Kentucky’s Louisville in June 2013, which will comprise of valves and pipes to carry groundwater to a series of tubes.

National Science Foundation gave $25m to Rice in 2001 to set up the Center for Biological and Environmental Nanotechnology (CBEN), to exclusively study the interaction of nanomaterials with living organisms and ecosystems.

Each tube contains thousands of rice-grain sized purple-black pellets of palladium-gold (PG) catalyst, which stimulate a chemical reaction to break down chloroform into nontoxic methane and chloride salt, said researchers.

Rice University professor of chemical and biomolecular engineering and the lead researcher on the PGClear project Michael Wong said chlorinated compounds, which are common groundwater contaminants across the globe, have been widely used as solvents since long time.

"These compounds are also extremely difficult to treat inexpensively with conventional technology. My lab began its work to solve this problem more than a decade ago," Wong added.

DuPont researcher John Wilkens said, "The scale of the technology was subsequently enlarged to permit use in conventional reaction systems for field implementation."

Researchers, who have been working on the details of the field pilot for several years, are now planning to subject the new technology to the rigors of real-world field conditions.

Image: Researchers claim that PGClear process would destroy some of the world’s most pervasive and problematic pollutants gently and quickly. Photo: Courtesy of Rice University.