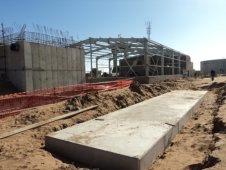 Veolia Water Solutions & Technologies South Africa has won a contract from the Cederberg Municipality to design, build and commission a 1.7 megalitre per day seawater desalination plant in the town of Lamberts Bay, Western Cape Province.

The new plant will be constructed to reduce pressure on the region’s water system and improve the availability of water for around 40,000 people.

Under the R17m ($1.6m) contract, Veolia will design the plant and equip it with a modern energy recovery system to ensure power savings and reduce carbon dioxide (CO2) emissions. The design will also accommodate a future upgrade to a plant capacity of five megalitres per day.

Seawater for the pre-treatment phase will be sourced from boreholes drilled near the shore close to Muisbosskerm.

Pre-treatment involves filtering to remove particles and other material in order to prepare the water for treatment by reverse osmosis (RO) membranes. For the RO phase, saltwater is forced through semi-permeable membranes which capture the salts but allow freshwater to permeate. Once the water is desalinated, it is stabilised with limestone and CO2 and supplied to the town’s freshwater network.

"Veolia is expected to commission the seawater desalination plant in October."

Veolia Paarl engineering manager Cobus Olivier said that the overall groundwater levels in the town have plummeted due to a rise in
consumption by the inhabitants and surrounding farmers.

"This new plant is part of the Cederberg Municipality’s drive to correct this problem and improve water sustainability," he said. Veolia is expected to commission the seawater desalination plant in October.

In 2012, Veolia Water Solutions and Technologies South Africa was awarded a contract by Ford Motor Company of Southern Africa for the construction of a new wastewater treatment plant at its Silverton assembly plant.