Construction on the 105-foot Elwha Dam was completed in 1914 by the Olympic Power and Development Company. Headed by Thomas Aldwell, the company aimed to appropriate the power-generating capacity of the Elwha River, with construction leading to the formation of the 267-square-mile Lake Aldwell reservoir.

While the dams – which generated a combined 28 megawatts of electricity – provided a major boost to expanding local communities and industrial development, in and around the nearby city of Port Angeles in the early 20th century, they have long since ceased to play a major role in meeting power supply demands: according to Wunderlich et al. (1994) the dams provided just 40% of the power needs for just one Port Angeles mill. 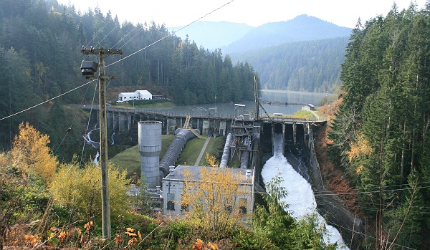 Construction of the two dams effectively split the Elwha River in to three separate entities. Courtesy of: NPS

Construction of the two dams effectively split the Elwha River in to three separate entities: the 4.9 miles of the Lower River below the Elwha Dam (pictured here before deconstruction); the Middle River between the two dams; and the Upper River above the Glines Canyon Dam, 8.7 miles further upstream. 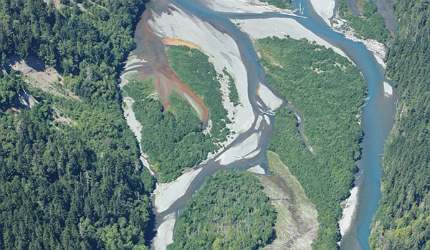 Construction also led to erosion of the river banks. Courtesy of: NPS

This had profound negative impacts on the Elwha River Watershed, including sediment and silt blockage behind the dams, as seen in this aerial image of the northern end of the Lake Mills Delta.

Construction also led to erosion of the river banks, as well as adverse effects on a huge portion of the park and people, such as the Lower Elwha Klallam Tribe, who previously relied on native fish populations for sustenance.

The decision to remove the dams 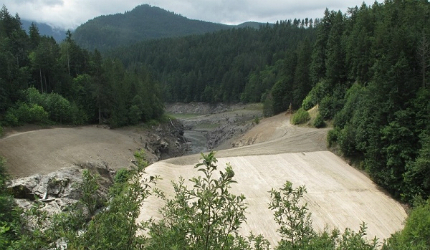 The Elwha Restoration Act of 1992 authorised the US Federal Government to acquire the dams for decommissioning and demolition. Following the creation of a diversion channel to allow the continued flow of the river during deconstruction, the dam was fully removed by March 2012 and the river was returned to its natural route, as shown by this image taken from one of the NPS’s several webcams documenting the dam deconstruction process.

In 1995, the final Environmental Impact Statement (EIS) concluded that removal of the dams was necessary to fully restore the ecosystem and native anadromous fisheries impacted by the construction of the dams.

This was followed in November 1996 by the final implementation EIS, which cited the need to allow accumulated sediment to erode downstream naturally following dam removal and that plans for fish restoration, revegetation and other actions should be implemented. 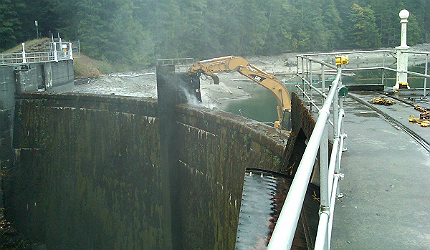 Another NPS webcam photograph shows the beginning of the Glines Canyon Dam deconstruction. The decision to remove the dams at a cost of $26.9m was preceded by Department of Interior studies on various alternative actions, ordered by the federal government’s "Elwha River Ecosystem and Fisheries Restoration Act of 1992".

These showed, by 1994, removal of the two dams to be the only effective way of restoring the ecosystem and its associated fisheries, taking into account a variety of factors, ranging from safety, security and water management requirements to societal considerations centred on local native American tribes. 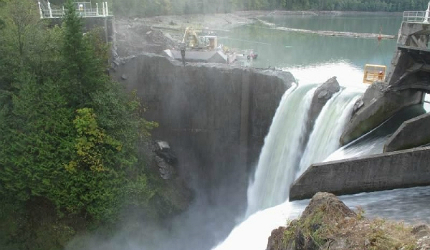 Both dams are being removed in stages to prevent major disturbances caused by disrupting the many millions of cubic metres of sediment piled up above the dams, as this could potentially cause extensive damage to ecosystems further downstream. 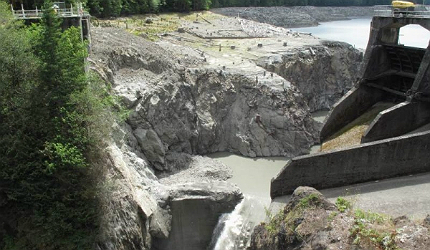 The final stage, which began in July, comprises controlled blasts to clear what is left of the dam wall

While this was taking place, crews worked to remove 7.5-foot sections of the dam wall from the top down, with the concrete blocks being trucked offsite and recycled.

The final stage, which began in July, comprises controlled blasts to clear what is left of the dam wall, depicted in this NPS webcam image from 23 July.

The facilities have already begun to treat water and remove sediment downstream of the dams. Courtesy of: Watts-DelHur

A number of other projects are helping to restore the Elwha River ecosystem, including the installation of the Elwha River water treatment facilities, built by Watts-DelHur. 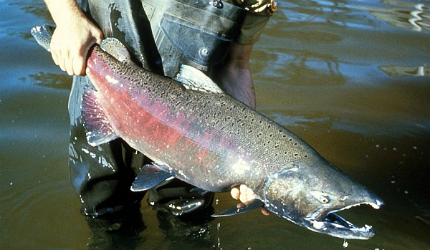 The NPS highlighted how important the return of Pacific salmon, including this Chinook salmon, could be to the region. Courtesy of: NPS

The NPS highlighted how important the return of Pacific salmon, including this Chinook salmon, could be to the region: "As adult salmon return to their freshwater natal streams to spawn, they bring with them marine-derived nutrients… Decomposing salmon carcasses provide… "a gift from the sea" in the form of nutrients that link the marine and terrestrial ecosystems. Often referred to as a keystone species, salmon are known to benefit more than 100 other species."

Original custodians of the Elwha – the Lower Elwha Klallam

The local Lower Elwha Klallam Tribe has had much to do with the dam removal process during the last two decades, as well as the overall restoration project, as primary project partners with the NPS.

The restoration not only of the bountiful supply of salmon but of an entire ecosystem will also renew tribal culture and give rebirth to age-old traditions and previously submerged sacred sites. 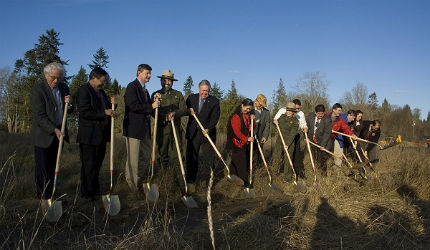 The Klallam people have thrown their support wholeheartedly behind the restoration project. Courtesy of: Tiffany Royal / NWIFC

The Klallam people have thrown their support wholeheartedly behind the restoration project for well over a decade. At the February 2010 groundbreaking ceremony for the $16.4m Lower Elwha Klallam Tribe Hatchery, which was completed last year, Rob Elofson, the tribe’s river restoration manager, proudly noted: "We’ve used all the influence we could to help restore the river. No one said we never lived up to our Klallam name – ‘Strong People.’"