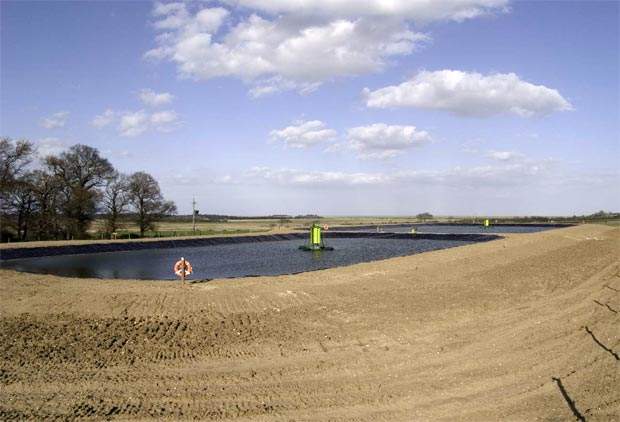 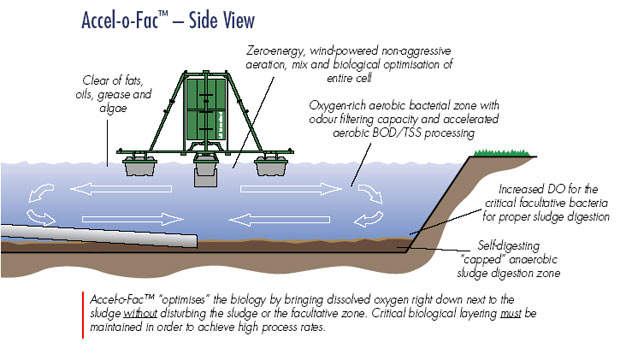 Schematic of the aeration process. The aerators / processors are wind-powered, contributing to a significant reduction energy costs. 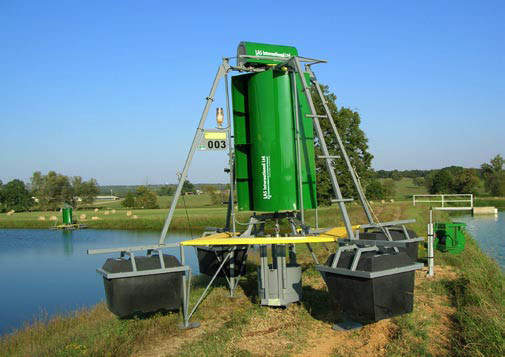 A Mark 3 aerator / processor unit out of the water. At Holkham there are two, each equipped with a backup motor. 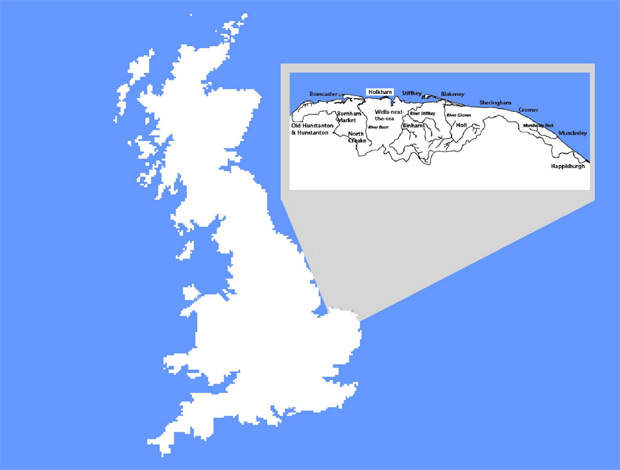 Holkham is one of the major tourist destinations on the North Norfolk coast and bathing water quality is monitored at the nearby Wells beach. 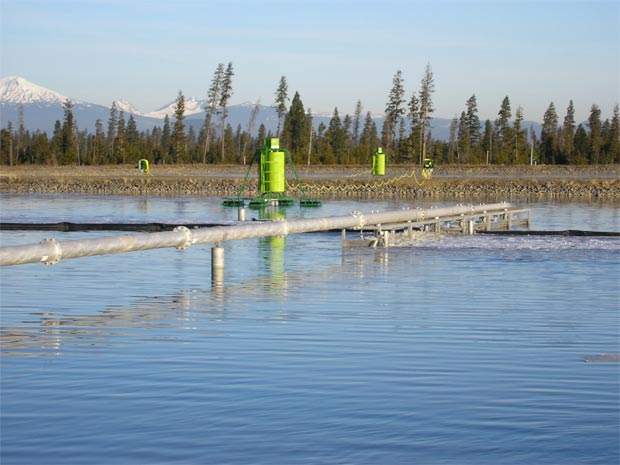 The Aero-Fac facility at LaPine, Oregon. The aerated facultative system was first developed during the 1970s in the United States. 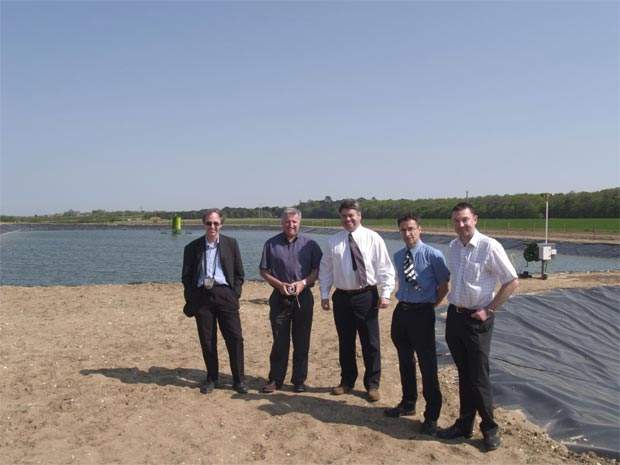 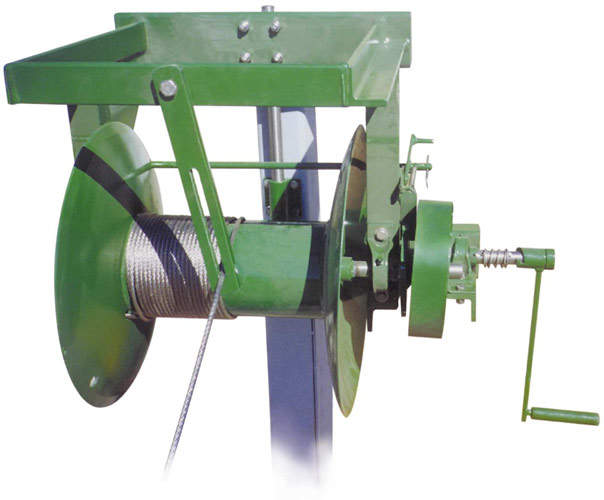 One of the winches used to position the aerator / processors.

Plan layout of the Holkham cells.

Completed in May 2006, the Holkham plant is one of a number of recent new projects in the UK to use innovative facultative systems from LAS International – driven by renewable energy and yielding no sludge – to provide wastewater treatment
for small rural communities.

The project required the formation and lining of primary and secondary treatment cells, together with the provision of necessary pipe-work, valves and aeration / mixing equipment. The overall scheme also involved sewer construction for the village of
Holkham, including the laying of a collection main and pumping station to convey effluent to the plant.

“The Accel-o-Fac system has been widely used for wastewater treatment in the United States.”

LAS first developed the Accel-o-Fac system 30 years ago in the United States, where it has been used extensively in a variety of wastewater treatment applications and although it is a relatively recent entrant to the UK, interest in the system has
grown rapidly.

With extremely low energy, low maintenance and low manpower requirements, it is an increasingly competitive alternative to more traditional treatment methods – especially as a solution to the wastewater needs of smaller communities.

Wastewater Treatment Plants (WWTP) serving population equivalents of less than 2,000 face disproportionately large per capita costs and are subject to their own operation and maintenance problems.

Within the context of the European Urban Wastewater Directive, selecting ‘appropriate’ treatment systems for such small applications – as required by the legislation – involves particular consideration of costs, reliability, sustainability
and simplicity.

A number of specific local issues also played a part in Holkham Estates decision to adopt an aerated facultative solution.

The village is one of the major tourist destinations on the North Norfolk coast and with the final discharge being made into bathing waters, a high standard of treatment, including effective pathogen removal, was essential.

The Environment Agency monitors bathing water quality at the nearby Wells beach – which has a very good compliance record over the past ten years. As a result, the ability of the selected system to handle wide variations in both organic and
hydraulic loading was an important consideration given the inevitable seasonal fluctuation of population.

Other advantages of the system are its low capital and operational costs, no requirement for pre-screening and no sludge handling or disposal – the plant being designed to accept septic tank waste from outlying properties. The Estate has a very
good environmental record and both the use of renewable energy and the fact that the only discharge from the site would be treated water were significant additional factors in the selection of this approach.

Treatment is wholly biological, combining time-proven processes with innovative technologies to extend the potential of conventional facultative lagoons by optimising internal zonation, thus addressing a number of the limitations traditionally
associated with them.

Unscreened incoming wastewater is distributed radially throughout the primary treatment cell via the specially designed dispersal inlet, enabling maximum use to be made of the whole volume and avoiding problems of both hot spots and dead zones. This
has the obvious additional benefit of providing an in-built solution to spike loading.

As in a traditional facultative system, biodegradable material within the influent is stabilised by both aerobic and anaerobic processes, the lagoon having naturally formed three layers – aerobic, facultative and anaerobic – defined by the
availability of oxygen within them.

The LAS system optimises performance by using non-aggressive aeration to convey dissolved oxygen right down to the sludge layer, but without disturbing either it or the facultative zone.

Boosting natural oxygen transfer in this way ensures the creation and maintenance of optimised biological layering and is the key to achieving high process rates.

Additionally, it also provides an ideal quiescent zone for settlement, ensuring that solids fall out into a ‘capped’ anaerobic zone for complete digestion at the bottom of the primary cell.

As a consequence, the amount of solids leaving is minimised, enabling the secondary cell to be maintained as a wholly aerobic environment, thus facilitating further BOD reduction, the removal of residual solids, disinfection and, under suitable
conditions, nitrification.

The system is said to provide self-digestion of all the organics – avoiding the need for regular sludge disposal and its attendant costs – and designed to accommodate any inert materials for the operational lifetime of the plant.

This claim is borne out by evidence from a number of applications in the US – including a ten-year study by the Kentucky Environmental Agency – with high DO levels at the sludge / water interface cited as essential for maximum facultative
biological treatment.

With the costs of sludge disposal having been estimated to account for up to 50% of the operating costs of a WWTP in some areas, a sludge-free system, which also combines operational simplicity with low running costs has clear appeal.

One particularly unusual feature of the LAS approach is the exclusive use of wind-powered aerators / processors, which greatly reduce ongoing energy costs.

Having clocked up over a quarter of a century of service in a variety of wastewater applications, they have proved successful even in very light breezes – with 5mph winds required only around 65% to 70% of the time to yield a zero-energy
system.

The Holkham installation principally comprises a 1.85m-deep primary lagoon which extends to nearly half a hectare and a 2.5m deep secondary cell, itself a little under half as big, together with associated pipe-work, valves and aeration / mixing
equipment.

The plant itself is well located to gain maximum benefit from the prevailing winds and operational costs are consequently anticipated to be negligible. Each of the two aerator / processors has a 500W backup motor which cuts in automatically, via an
anemometer control system, when winds fall below the set point of 5mph.

Operator involvement is minimal – largely confined to occasional visual inspection, some routine work at the final discharge and annual replacement of greaser packs on the aerators.

Currently, the final effluent is piped back along the plant access trench and discharges to the sea, via a nearby stream but the possibility of diverting the treated flow to an existing irrigation reservoir during the winter months is being considered
for the future.

The client was Holkham Estates, with LAS responsible for plant design and supervision services. Plandescil were the project consultants and Breheny was the contractor.