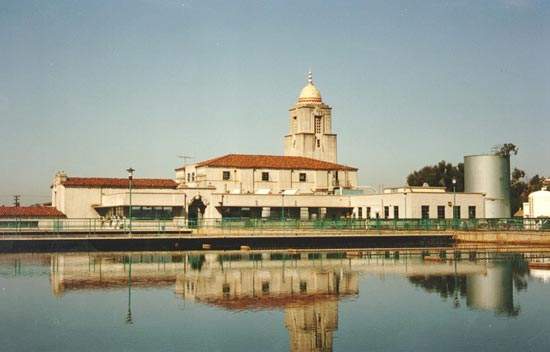 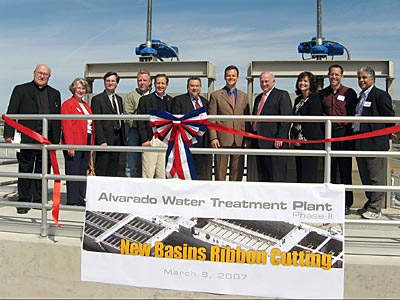 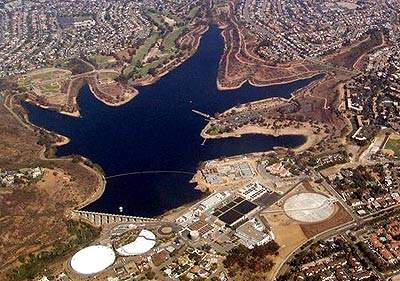 Aerial view of Lake Murray; completed as part of Phase II, the new flocculation and sedimentation basins were built along the south-eastern shore. 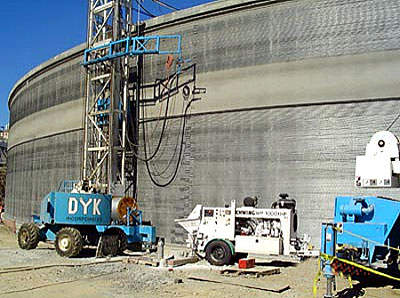 DYK completing the vertical pre-stressing and the exterior finish of the new Earl Thomas Reservoir. The location called for good seismic stability and several features have been incorporated into the design to mitigate the potential effects of tremors. 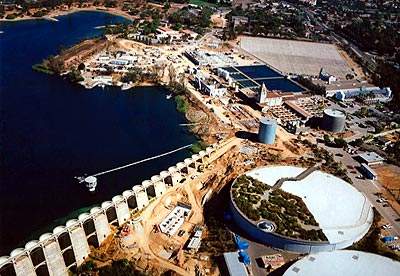 Aerial view of the site during Phase 1A of the work. The programme of renovation and construction began in 1993 and will be completed in 2010 or later, depending on bond financing and State grants. 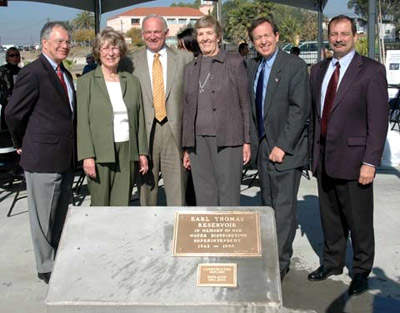 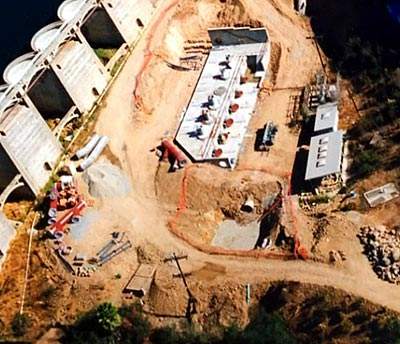 Delivered in six phases over a period of 20 years, the scheme is intended to provide a state-of-the-art water treatment facility, with an expected working life of 75 years. It is expected meet the anticipated needs of San Diego’s growing population until 2030.

The project will see the construction of a new ozone generation facility as part of the expansion, providing an ozone contactor and associated equipment together with a building to house it.

The ozone building will be between 25ft in height at the highest point and will house three ozone generators able to process 1,000lbs a day. An ozone off-gas destruct system, pumps, chemical systems, and ozone contactors will also be provided.

The project is anticipated to be completed by the first half of 2011 at a cost of $57m.

The overlapping Phase III rehabilitation of the original sedimentation and flocculation basins were completed in January 2011.

Phases I, IA, and II accounted for a total of just under $200m, with Phase III costing $16m and Stages IV and V estimated at about $100m.

The Alvarado plant is the oldest of the three facilities, having been first brought into service in 1951. San Diego County Water Authority began to modernise the plant in 1993, completing two new 80,000m³ drinking water storage tanks in 1998. The following year, the work received the American Society of Civil Engineers’ National Award and the American Public Works Association Project of the Year.

However, despite this success, changes in federal and state drinking water regulations coupled with the compliance order issued by the California Department of Health Services in 1997 made further upgrades essential. In November 1998, Phase I of the project began under the Capital Improvement Programme (CIP).

Completed in 2003 at an investment of $65m, Phase I was a major construction programme aimed to enhance the chemical treatment facilities and pumping arrangements, which involved providing a number of new elements including a raw water blending vault, head-works with an associated rapid mix structure, and eight filters.

The eight pre-existing filters also underwent a series of upgrades, including the addition of filter-to-waste piping. Molecular chlorination disinfection facilities were also installed alongside day tanks, bulk tanks, and dosing facilities for both liquid polymer and ferric chloride.

In addition, the facilities were constructed for dry polymer and potassium permanganate storage and dosing, while two pre-existing aqua ammonia tanks were relocated as part of the new provisions made for the finished water chemical treatment. New tanks and dosing facilities for sodium hydroxide were also built.

Another component of Phase I was the construction of a 4,300m³ wash-water supply tank with the buildings for effluent control, switchgear, and the emergency generator. The Lake Murray raw water pump station required a complete tear-down and re-build, while the one at College Ranch underwent a programme of rehabilitation. The existing operations building was also upgraded and improved.

After completing Phase I, the plant’s capacity increased from 120 million gallons per day (MGD) to 150MGD.

The demolition of the ageing and seismically unsafe Earl Thomas reservoir in 2002 marked the start of Phase IA. Stability in a region prone to earth movement was a key consideration in the design of its replacement and the effects of vertical, horizontal, and overturning movements were important factors in selecting the new pre-stressed concrete tank.

Neoprene pads separate the roof and floor from the core-wall, which permits each to move independently in the event of an earthquake. Special cables have been used to control lateral seismic forces, while allowing free movement of the wall under normal conditions. The new Earl Thomas tank measures some 124m in diameter and 11.5m deep. Constructed at a cost of $31m in December 2004, the new tank facilitates the disinfection process of the water released from the plant.

The new Earl Thomas tank measures some 124m in diameter and 11.5m deep, making it the largest of its kind

In addition to the tank itself, nearly 300m of tunnel was also constructed to accommodate the 1.5m diameter pipe that links it with the existing two 80,000m³ reservoirs. Connections were made to the Phase I filters, via the effluent control also constructed.

Other work in this phase included improvements to the treatment plant entrance and site security, together with a car park and other amenities for visitors to Lake Murray. Phase IA was completed at the end of 2005.

Phase II ran from April 2004 to March 2007, when the ribbon was cut on the new flocculation and sedimentation basins built along the south-eastern shore of Lake Murray. The electrical and control systems of the plant’s eight original filters were also upgraded as part of this element.

Work on the SD-17 pump station was cancelled due to the department’s prioritisation of other projects.

Phase III of the project began in August 2009 and was completed in January 2011. The plant’s flocculation and sedimentation basins one and two were modernised with upgraded equipment, controls, and structural improvements. Necessary channels and equipments were also installed to allow the ozone treated water to flow to the west side of the plant.

The Phase IV work to provide major ozone treatment facilities including the installation of ozone generators, contactors, and associated equipment began in June 2008. The work is anticipated to be completed by May/June 2011. The phase is expected to cost $57m.

The facility is an important step to provide quality drinking water to the residents of San Diego. Ozone will be used as the primary water disinfectant at the plant, which will reduce the use of chemical chlorine.

The final phase of the project is principally a finishing stage, including shoreline landscaping, post-construction provisions for storm-water, final site improvements and the construction of a back-up ozone generator and pump. Phase V is scheduled to begin in the summer of 2012 and be completed by the end of the following year.

Further work is expected at the plant after the completion of the main project in 2013, including the possible construction of sludge processing facilities and eight new filters. However, no formal decision has been reached and no timeframes have been suggested.

In March 2007, 6,128 photovoltaic (PV) solar panels were installed on top of three water storage reservoirs at the plant covering around 4.33 acres.

The captive systems by solar services company SunEdison were built under a power purchase agreement (PPA), where the company will own and maintain the solar systems. This enables City’s Water Department to avoid about $6.5m of installation costs.

The 1.135MW solarpower installation can produce 20% of the annual electricity consumption of the plant saving up to $40,000 annually. The company sells solar energy at lower rates than market price.

The plant had received $250,000 federal funds in February 2009 for the upgradation of wastewater treatment plant. This was an addition to the $2.3m loan the plant received from the US Department of Agriculture (USDA) in 2008. The loan had not covered necessary pipeline replacement funds.

The plant has been allocated a budget of $36.9m in the Department’s CIP Budget of Fiscal Year 2009 to complete the upgradation and expansion process and meet the federal Safe Drinking standards.

The plant is owned by San Diego County Water Authority. Design work was completed by Malcolm Pirnie and Richard Brady Associates, with construction management by CH2M Hill and Parsons acting as programme manager.

Reed. Ameron, Northwest Pipe, and American Pipe were the manufacturers and suppliers of the cement mortar lined and coated steel piping. Pratt Valve has supplied the valves and EIM the valve actuators.

Victaulic has supplied pipe couplings, while Tankentics provided chemical tanks, and the pump supplier was Fairbanks Morse. The chlorination system and associated safety equipment was supplied by US Filter.