Department of Environment and Conservation
Expand

Tunnel excavation at the Bondi STP. The main scope of the construction involves excavating a cavern to provide additional space, work within the plant itself and the refurbishment of the digesters in the above ground section of the facility. 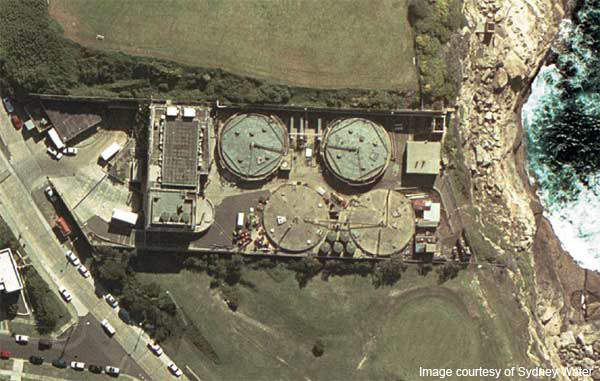 The above ground section of the plant, showing the digesters. The Bondi facility is Sydney's third largest coastal treatment works. 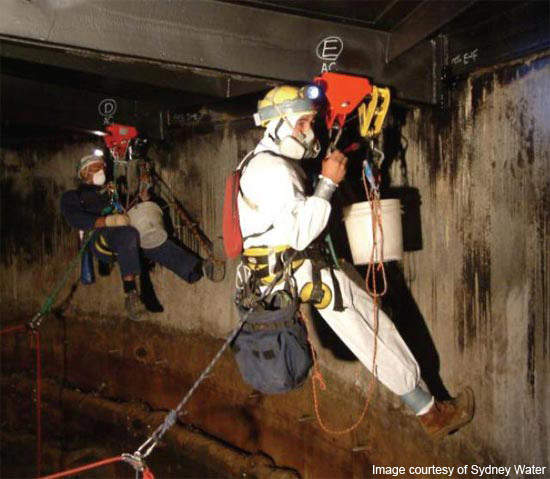 The abseiling team inspecting one of the digesters. Each of the plant's four above-ground digesters needs to be emptied and refurbished in turn. 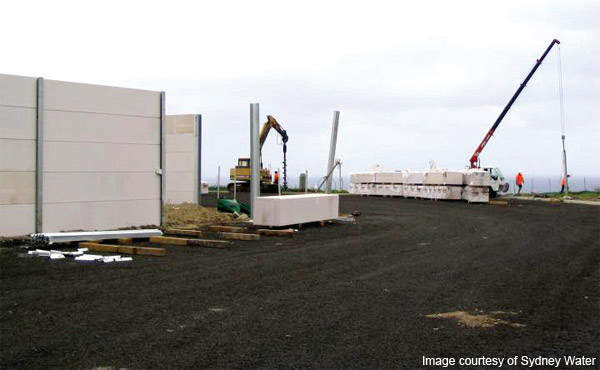 The fence being installed on Hugh Bamford Reserve – around half of the adjacent ground has been adopted as a construction staging area. Once work finishes, an extensive program of rehabilitation will take place and Sydney Water is also to contribute to various long-term improvements to the site. 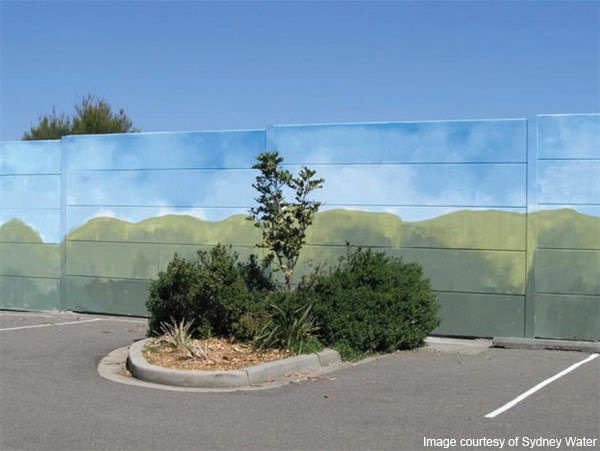 The installed fence around the staging area was painted and landscaped with native species to reduce its visual impact. 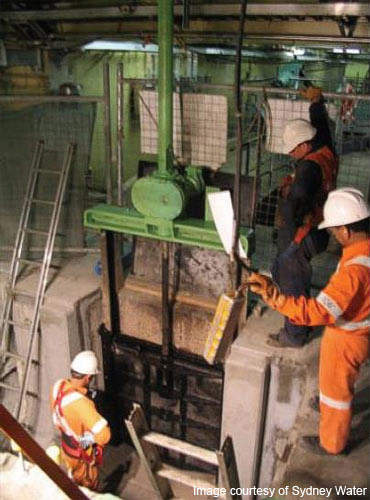 Installing the renovated penstocks; these gates are thought to have been made in England during the early 1950s and shipped to Australia. They are one of several local significant heritage items. 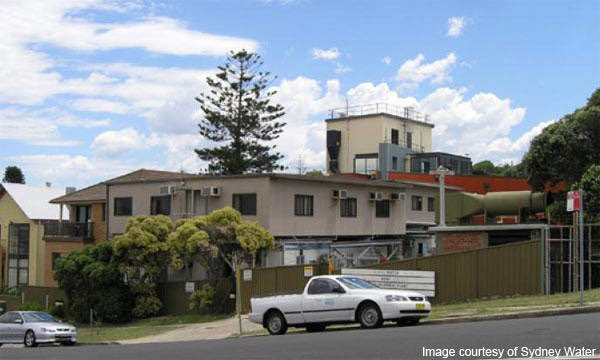 In January 2006, the demountable buildings were removed from Blair Street North Bondi and a new staff car parking area constructed. 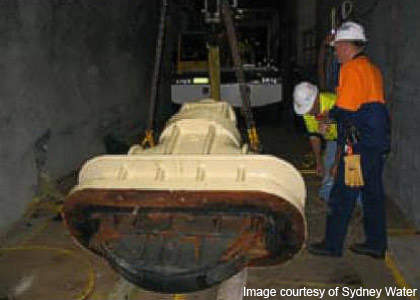 One of the ocean outfall pump valves. Removing, refurbishing and reinstalling each of these in turn was one of the most challenging aspects of the project.

The Bondi sewage treatment plant (STP) takes wastewater from half a million inhabitants and discharges 130 million litres/day of treated effluent into the ocean.

Originally commissioned in the 1950s, the facility has undergone a major reliability improvement and modernisation program (RIAMP) designed to renew and enhance the plant to ensure continued, reliable performance for the future.

The project was completed in early 2007 as part of Sydney Water’s Water Plan 21 and Coastal Wastewater Strategy, which forms a key element in the utility’s ongoing work to protect the region’s oceans and beach environments.

"The project forms a key element in the utility’s ongoing work to protect the region’s ocean and beach environments."

The work has included addressing issues of wastewater distribution and flow control, sludge management and discharge pumping, improving the collection, handling and disposal of screenings/grit and refurbishing the plant’s four digesters.

Upgrades to the ventilation, electrical, and control systems were also made, along with increasing the level of automation to improve working conditions and further enhancing the operational reliability of the plant.

The project cost was AUS$95m.

Bondi STP is one of ten coastal treatment plants operated by Sydney Water, a statutory state corporation wholly owned by New South Wales that provides water and wastewater services to more than four million people in Sydney, Illawarra, and the Blue Mountains.

A high-rate primary treatment plant, the project originally discharged effluent from the cliff face, but public concern over the effect of this approach on the water quality of local beaches led to the construction of a deep water ocean outfall, which was commissioned in 1991. At a maximum water depth of 63m and with a 512m diffuser zone, this now effectively disperses the effluent 2.2km out from the shore.

Treatment sees grit and waste removed before the water enters sedimentation tanks. An average daily dry weather discharge of 130 million litres of effluent is pumped to the ocean outfall. Digesters stabilise the settled material, which eventually leaves the site to be mixed with other organic matter for use as a soil conditioner in agriculture and forestry in the central west region of New South Wales. Screened waste and grit are landfilled.

After more than fifty years of operation and despite various updates over its life, parts of the facility inevitably needed renewal and modernisation. In addition, advances in automation offered significant potential benefits in reliability and workforce welfare to a treatment works originally designed with a heavy reliance on manual operation.

In January 2004, construction work began on the three-year programme to safeguard the plant’s ability to meet the needs of the region into the future.The project site preparation actually began in October 2003.

As most of the Bondi plant is housed in chambers cut into the sandstone 40m-50m below ground, the project included an element of tunnelling to extend the existing area to allow the new processing equipment to be accommodated. Although much of the work is underground, some also took place on the surface.

The plant layout consists of four sections, each comprising identical grit and sedimentation tanks. To enable continuity of operation throughout the improvement programme, each will undergo demolition, electrical work, and construction, leaving three remaining sections in service to ensure safe and effective treatment. The existing screening equipment was replaced with a new and more efficient system.

In the same way, the programme called for each of the plant’s four digesters to be emptied and refurbished in turn. In addition to grit blasting and painting the digesters, the sealed areas around the digesters themselves were resurfaced.

Removing and refurbishing the large valves fitted to the six ocean outfall pumps represented one of the most challenging aspects of the project.

By timing the work to coincide with a low tide early in the morning when plant flows are low, and having one of the sedimentation tanks empty and on standby to receive excess effluent, the work was completed safely while the plant continued to operate. Each valve was removed in turn, returned to the supplier for rehabilitation, and then reinstalled as favourable tides permitted.

In the closing phases of the programme, the below-ground odour scrubber was refurbished and the potential installation of a digester-gas-powered electrical generator was investigated. In addition to the improvement scheme, some essential repair was also carried out on the sludge dewatering building.

"A recycled effluent system is being installed in a series of phases, to reclaim water for use within the plant for screen washing and other processes."

The electrical systems were upgraded with the installation of around 90km of new cable, the removal of 100km of redundant cabling, switchboard replacement, and the substitution of two new transformers with twice the capacity. In addition, 250 new monitoring and control instruments have enabled the automation of many routine aspects of plant operation.

A recycled effluent system was also installed in a series of phases to reclaim water for use within the plant for screen washing and other processes. This amounts to around 3 million litres/day of treated wastewater.

Although Sydney Water treats and recycles more than 15 billion litres of treated wastewater annually for home use, irrigation, agriculture, and industrial purposes, the potential outlets around the Bondi plant are too limited to justify the higher levels of treatment required.

Environmental improvements to the reserve

Pan Civil was responsible for the work to restore Hugh Bamford Reserve at completion. Weed control was done by Earth Repair and Restoration.

Sydney Water is the plant owner and project sponsor. Joint venture (JV) partners CH2M Hill and Sinclair Knight Merz were responsible for the programme concept design and were joined by a consortium of Walter Construction Group (WCG), Golder Associates, and United Group Infrastructure in 2003 to undertake the construction work.

However, in February 2005, WCG entered voluntary administration and played no further part in the project. The discharge licensing and monitoring authority is the Department of Environment and Conservation.