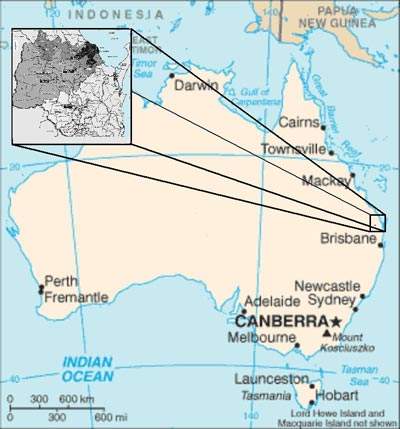 Map showing the location of the Burnett Catchment area within Queensland. 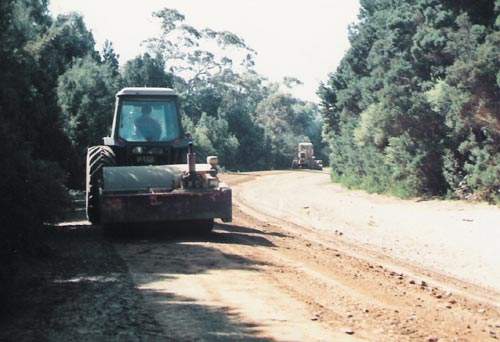 Before dam construction commenced, two stretches of roadway were upgraded to improve access, 16km of the existing roadway to the dam site and 6km serving the approach to Eidsvold Weir. 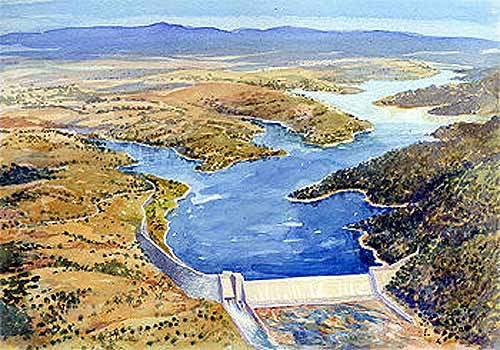 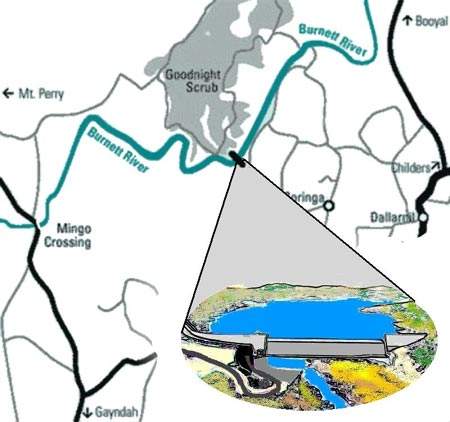 The location of the Paradise Dam, currently under construction, with an artist's impression of the finished structure. 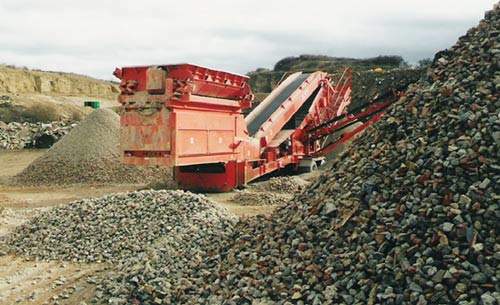 Construction work on the dam began in November 2003 and progress to the following August suggests that it is on target for the scheduled completion date in October 2005. 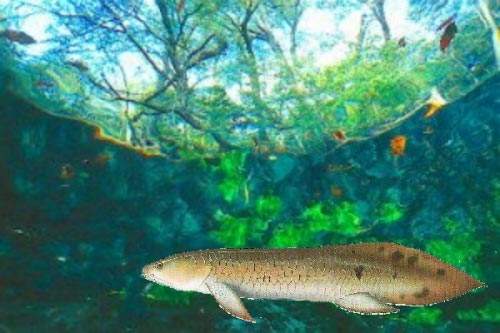 The Burnett River Dam project has met with objections on environmental grounds because it is one of the only two habitats in the world for the rare Queensland Lungfish. However, it has also received much support from a variety of sources. 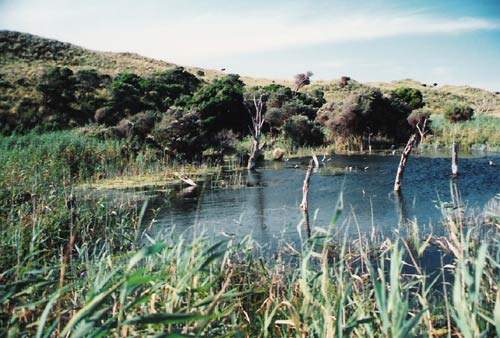 The Burnett Catchment area is an important site for wildlife. Many of the shallow vegetated bodies of water are likely to disappear when the inevitable reduction in flow occurs.

The construction of the Burnett Dam, the central element of a controversial AUS$200m infrastructure improvement programme, began in November 2003. The Queensland Minister for State Development had formally announced the selection of the Burnett Dam Alliance as contractors for the work the previous month, in the wake of the successful completion of two smaller preliminary parts of the project.

Although the project is intended to improve the provision of water to the region, yielding 124,000Ml a year as medium priority water for agricultural use and a further 20,000Ml a year as high priority urban and industrial supply, it has attracted serious criticism from some quarters. While the 300,000Ml capacity dam provides valuable irrigation water, especially for the sugarcane industry, critics fear the changes in the river topography and flow will inevitably alter the river environment.

Blasting and drilling works commenced on site during the first quarter of 2004 and construction on the main structure was underway by August.

The dam wall was completed in 2005, followed by the commissioning of the outlet works towards the middle of the year. Final completion of the dam was in November 2005.

In December 2005, the Burnett River Dam was officially named Paradise Dam after the former mining settlement in the area. It has been delivering water to Bundaberg and the Lower Burnett region since opening.

The Burnett River Dam is built 80km south-west of Biggenden. The Queensland Government established Burnett Water to run the whole development project, which also included construction of the Kirar (formerly Eidsvold) and Barlil weirs, and raising the existing Jones and Ned Churchward (formerly Walla) weirs. The Kirar Weir construction was completed in July 2005 and it supplies water to the Upper Burnett region.

Before construction work started, two stretches of roadway were upgraded to improve access. 16km of the existing roadway to the dam site and 6km serving the approach to Kirar Weir were changed to fully asphalted, two-lane roads. In addition, Chowey Creek Bridge near Biggenden was replaced. The last part of the project implementation centred on the provision of recreational facilities, for which a budget of AUS$500,000 was set aside.

During the 1999 state election, the Labour Party made a manifesto promise to build the dam on the Burnett River, which was widely thought to be an attempt to win the marginal state seats of Bundaberg and Burnett.

“The Burnett River Dam was officially named Paradise Dam after the former mining settlement in the area.”

Once elected, the state government initiated a scheme for strategic water infrastructure development and produced a water allocation and management plan (WAMP), which had to comply with the Council of Australian Governments’ water reform agenda, to advance the process.

The WAMP used an integrated quantity / quality model (IQQM) flow model, which recommended an environmental flow for the Burnett River of 81%, indicating that only a further 62,000Ml of water could be taken without risking serious environmental damage.

Having received this recommendation, the Queensland Government amended their own legislation to permit 196,000Ml to be extracted from the river and the environmental flows consequently reduced to 72%. This would also set the annual recurrence interval (ARI) – the small flows responsible for flushing out nutrients, weeds and salt and providing habitat requirements for animals and plants – at 40%. The WAMP had recommended that the ARI be set at 74% of natural flow, on a recurring one-and-a-half year cycle.

Unsurprisingly, this action was widely seen as politically motivated and received heavy criticism.

The Burnett River is one of the only two habitats in the world for the Queensland Lungfish (Neoceratodus forsteri), living fossils that have changed little in over 100 million years, which require shallow, vegetated water bodies in which to spawn. Such conditions are not created upstream of dams and those areas that exist are likely to be lost when the inevitable reduction in flow occurs.

“The Burnett River is one of the only two habitats in the world for the Queensland Lungfish.”

Studies from the Australian Lungfish Research Centre suggested that this situation was exacerbated by the species’ loyalty to ancestral spawning grounds. Returning to the same site year after year, if the areas has become unsuitable the animals simply do not breed.

With a lifespan of up to 100 years, the population may be in serious decline before the problem becomes apparent, by which time it may be too late to avoid loss of the species.

In January 2003, the Threatened Species Scientific Advisory Committee recommended that Neoceratodus be officially listed as a vulnerable threatened species on the basis of its fragmented habitat, small genetic diversity and increasingly degraded spawning sites.

The river is also home to a currently undescribed species of Elseya freshwater turtle and a number of bird species. In addition, the Great Barrier Reef risk workshop of 2003 identified the Burnett River as a high risk, due both to catchment quality and the likely effects of further infrastructure developments.

A long campaign of opposition from a variety of sources, including local residents, landowners and environmentalists, followed the progress of the project with much criticism levelled at key government figures, in both state and federal administrations.

“Burnett Water is taking a variety of measures to minimise the scheme’s impact on the delicate and unique habitat.”

However, the project was the subject of an extensive consultation process and had strong support, especially from cane growers, local industry and a number of regional water development groups. On 9 December 2003, Australia’s National Competition Council released a long-awaited assessment report strongly endorsing the economic viability and ecological sustainability of the Burnett River Dam.

It included a thorough assessment of the economic and environmental issues surrounding the project, confirming the dam to be both economically viable and ecologically sustainable.

In approving the project, the state and federal governments imposed environmental guidelines and Burnett Water is taking a variety of measures to minimise the scheme’s impact on the delicate and unique habitat. If, however, the lungfish does turn out to be a critical indicator species, it may be well into the 22nd century before it becomes apparent just how successful these efforts have been.

The project was sponsored by the State of Queensland Government, which established Burnett Water specifically to act as project developer. Burnett Water became a subsidiary of SunWater in December 2005, after shares were bought by the latter from the Queensland State Government.

The main contractor for the Burnett River Dam construction was the Burnett Dam Alliance, a consortium comprising the Walter Construction Group, Macmahon Holdings, Hydro Tasmania, SMEC and the Wagner Group.

The dam access road contractor was RoadTek, a local division of the Department of Main Roads, in partnership with Biggenden Shire Council. Eidsvold Shire Council was the contractor for the Kirar Weir access road. The EIS was done by Sinclair Knight Merz. All the legal aspects of the project were advised by the international law firm, Allens Arthur Robinson.