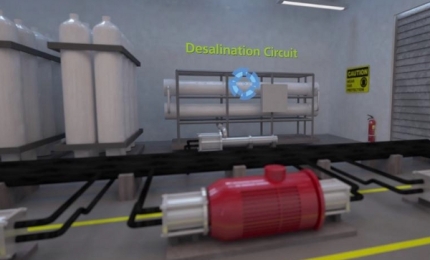 Carnegie Wave Energy’s CETO Wave-Powered Desalination Pilot Plant is co-located with the Perth Wave Power Project (PWEP) on Garden Island, Western Australia. The plant became operational in April 2014 and is the first commercial-scale wave-powered project in the world to demonstrate both power and fresh water production from the ocean waves.

The desalination facility uses a seawater reverse osmosis (SWRO) process, providing water to meet one-third of the water needs of the Royal Australian Navy’s largest naval base HMAS Stirling, which is located 3km offshore from the project site on Garden Island.

Construction of the desalination plant started in November 2013 involving a total investment of approximately A$1.27m ($1.17m), which was funded under the Clean Technology Innovation Programme.

Carnegie signed a cooperation agreement with the Water Corporation of Western Australia in August 2013 to provide support for the construction of the wave-powered pilot plant.

The most important components of the plant are the use of Carnegie’s CETO wave energy technology for the SWRO desalination process. SWRO was chosen as it is the most feasible option technically and economically.

This CETO system operates in deep water, unaffected by storms and away from breaking waves and beach-goers. It operates in a water depth of 20m-50m and comprises a fully submerged buoyant actuator (BA) attached to a pump on the seabed. The BA moves with the currents of ocean waves causing the pump to extend and contract. The pump delivers large volumes of high-pressure water ashore through a subsea pipeline, for desalination using SWRO.

"This process can be repeated more than once to reduce the percentage of rejected concentrate water."

This process can be repeated more than once to reduce the percentage of rejected concentrate water.

Perth-based MAK Industrial Water Solutions was awarded the manufacturing and construction contract for the pilot plant in December 2013. It provided its expertise in reverse osmosis desalination solutions to the project.

Key elements of the plant, including onshore plant and process control systems, were supplied by ABB Australia.