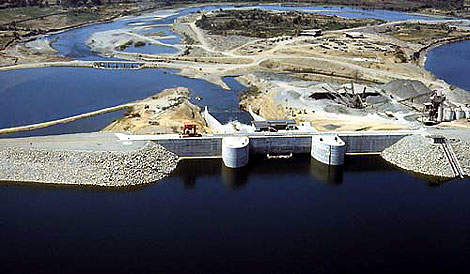 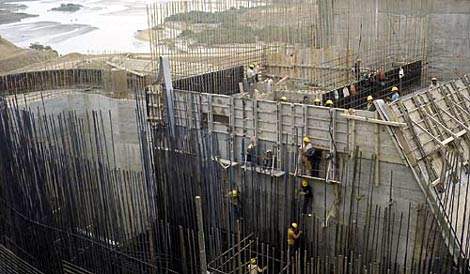 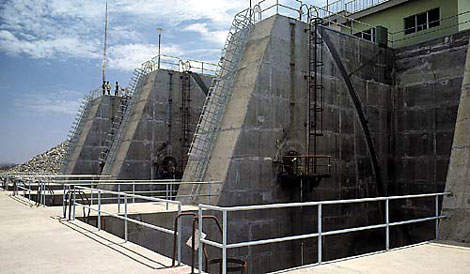 Spillway under construction at Chira-Piura, Peru. (Image courtesy of Energoprojekt) 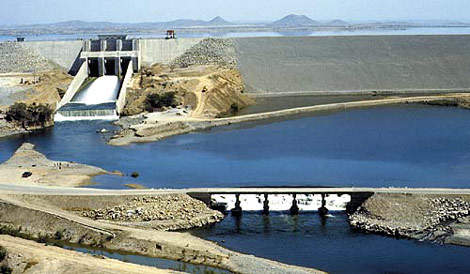 Downstream view of the spillway at Chira-Piura, Peru. (Image courtesy of Energoprojekt) 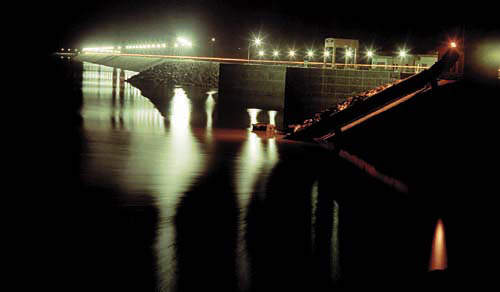 Poechos Dam with spillway in foreground. (Image courtesy of Energoprojekt) 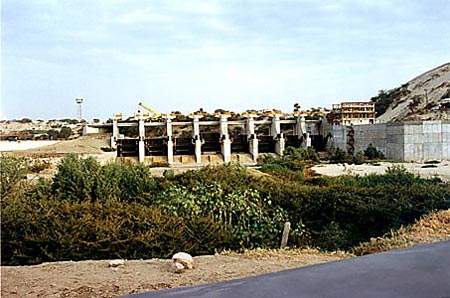 Poechos Dam with spillway at night. (Image courtesy of Energoprojekt) 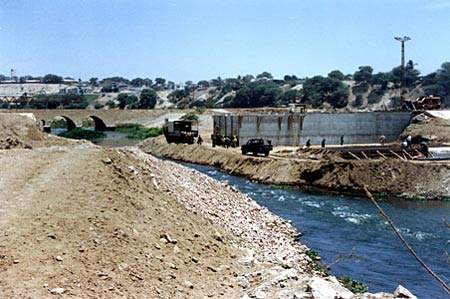 Approval was given in June 2002 for the building of the 15.4MW Poechos hydroelectric plant in Peru. It was the start of the final phase in a 30-plus year programme to construct the Chira-Piurra water management system.

The purpose of the multipurpose water management system was to improve the accumulation of water stocks in the upper part of Peru’s Chira basin by introducing flood controls, irrigation, drainage and electricity production.

The Chira-Piura Water Management System is situated in the northern most part of Peru, in the lower flow of the rivers Chira and Piura, which run into the Pacific Ocean. The Poechos Hydroelectric Project is constructed on the Poechos irrigation dam, which is located in the Piura district, part of the northern Peruvian province of Sullana, approximately 30km from the Ecuador border.

The design brief was to revitalise the Piura valley, which was short of water, and provide modern irrigation for approximately 35,000ha of arable land.

A multinational team of engineers carried out the overall design of the water management system. The team comprised Energoprojekt – Hidroinzenjering from Serbia, US-based IECO, local companies LAGESA and Novoa from Peru, along with German company Salzgitter.

“The design brief was to revitalise the Piura valley and provide modern irrigation for 35,000ha of arable land.”

The engineering solution was based on accumulating water surplus from the upper part of the Chira basin into the Poechos Irrigation Dam, and transporting part of this accumulation into the Piura basin by means of a 55m-long headwater channel.

In parallel, new irrigation and drainage systems were installed throughout the 35,000ha of arable land within the Lower Chira basin.

Next to the main channels, two headwater dams were built along the regulated river flow of both rivers and the channel network for irrigation and drainage of the reclaimed ground. The Curunuy dam and power plant, completed in 2000, is located at the outflow chute of the headwater channel in the Chira valley. The Poechos dam, which was completed in 1977, is the location where the approved hydro plant will be constructed.

Based in Belgrade, Serbia, Energoprojekt has been the main contractor throughout the water management system project. Its Peru-based company, Energoprojekt – Izgradnja has worked alongside a consortium of Peruvian companies comprising GOSA, Metalna, COSAPI, UPCA and VILLASOLI.

The first phase – from 1970 to 1977 – included the rock-filled Poechos dam (9km long with a maximum height of about 55m and a total excavation volume of nine million square metres); the diversion tunnel built into the bottom outlet (maximum capacity of 14m³/s); the concrete gravitational block of the overflow structure (400,000m³ concrete) with radial gates (total capacity up to 5,500m³/s); and the safety overflow of approximately 200m long with a capacity up to 10,000m³/s.

The third phase – from 1985 to 1996/7 – consisted of the headwater dam, Sullana (which is 75m long and has a maximum height of 12m) and gates with a total capacity of up to 5,000m³/s; the headwater channel, Norte, with a capacity of 25,500m³/s over 56km (which irrigates 15,000ha); the channel, Sur (which is approximately 35km long with a capacity of 7m³/s) for the irrigation of about 7,000ha (in total about five million square metres excavation); and about 60km of dykes along the regulated river bed in the lower Chira flow (about 5.5 square metres of embankment).

The final phase, from 1997, included the Curunuy dam and power plant, completed in 2000, and the 12.5MW Poechos Hydroelectric Project, which was approved in June 2002 and was completed in 2004.

The Poechos Dam operates using drainage catchment from the Chira river basin system that extends northwards into Ecuador. The energy potential of the Chira-Piura irrigation system was considered only as a secondary benefit and was partially used through the installation of the Curumuy hydro plant that generated about 65GWh in 2000.

“The design of the Poechos project is largely based on the passive use of water flows dependent on irrigation demand.”

The Curumuy plant, which is owned by Sindicato Energético, was completed in 2000 and uses the drop in elevation between the watersheds of the Chira and Piura river systems.

The design of the Poechos project is largely based on the passive use of water flows dependent on irrigation demand. However, during months of lower irrigation demand it will be possible to generate additional energy by using a small existing reservoir that serves as a regulating reservoir located at Sullana, about 40km downstream from Poechos on the Chira River.

The second phase of Poechos hydroelectric plant was inaugurated in July 2009 with an additional power generation capacity of 10MW. The $14m project took 18 months for completion. The project will also supply power to national grid and will be purchased by Electronoroeste.

The project takes 45m³/s of water from the Poechos dam.

The plant relies on flows of water dictated by irrigation demands and, as such, generates about 60GWh of electrical energy per year. The power plant is part of Peru’s aim to generate 90% of national electrification using environmentally friendly sources by 2010.

The power plant project consists of the following components: a steel penstock connected to an existing steel discharge pipe at the base of the dam; a powerhouse equipped with two Kaplan turbines, which drive two 9.5MVA generators; a switchyard located near the powerhouse; and a 35km-long, overhead transmission line from the switchyard to the Sullana substation of the national electrical grid.

After exiting the generators, the water is discharged into the pre-project, energy dissipater of the Poechos dam and fed into the irrigation system. The energy produced by the Poechos Hydroelectric Project is sold to Electronoroeste, the concessionary for energy distribution in northwestern Peru, under a power purchase agreement. The total cost of the project is nearly US$16.3m.