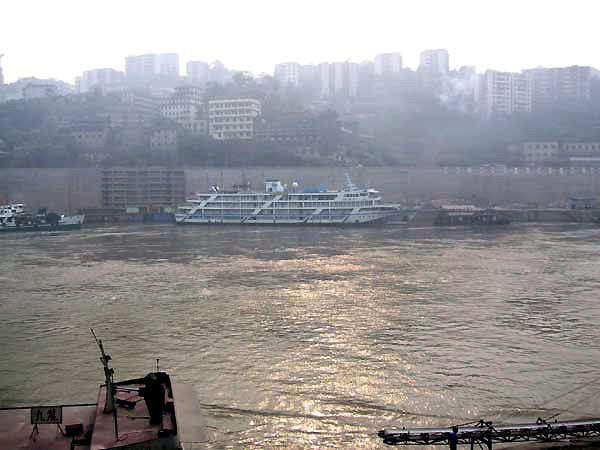 Chongqing City from the Yangtze River. 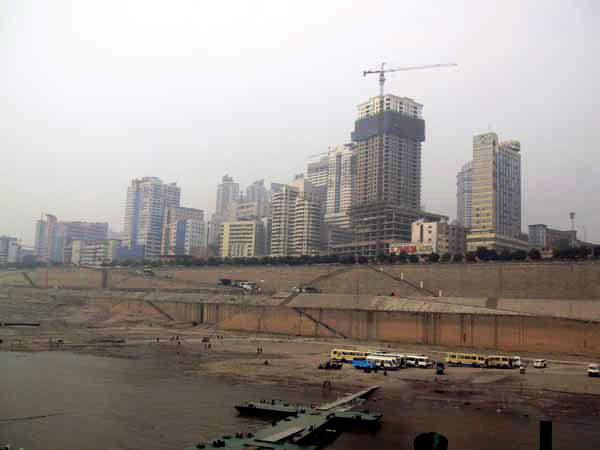 The heavily industrialised city of Chongqing.

The Three Gorges Dam – the world’s largest hydro-electric project – and the Yangtze River seen from the Proba satellite. 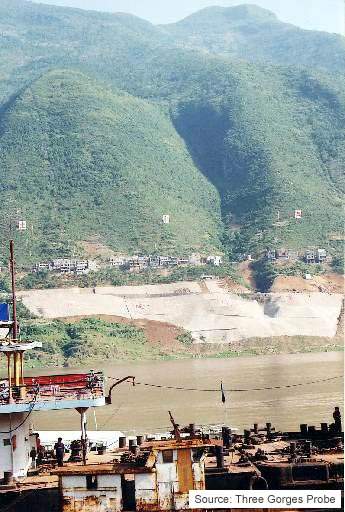 Construction work progressing on the banks of theYangtze; the complete wastewater project is not expected to be finished before 2010. 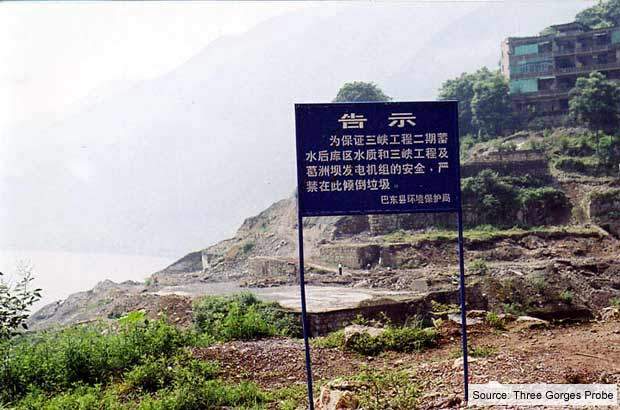 Badong Environmental Protection Bureau’s sign prohibits dumping to safeguard the quality of the water; waste has been implicated in earlier incidents of major water pollution which left around a quarter of the area’s rivers useless as water resources. 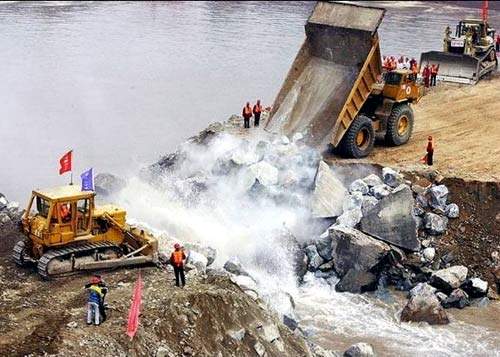 Construction at the dam; work was finally completed in May 2006, ahead of schedule and on budget. 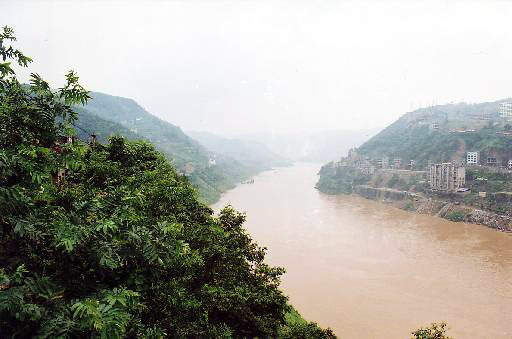 Wu river – a Yangtze tributary; the water quality in many tributaries has deteriorated so greatly that they are now officially rated as unfit for any economic purpose, including irrigation. 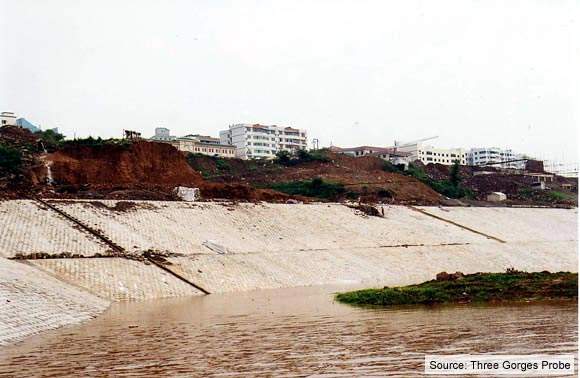 More construction work along the banks of the Yangtze. The Chongqing urban environment project has other components in the adjacent urban centres of Wanxian and Fuling, together with pilot schemes in Qianjiang. 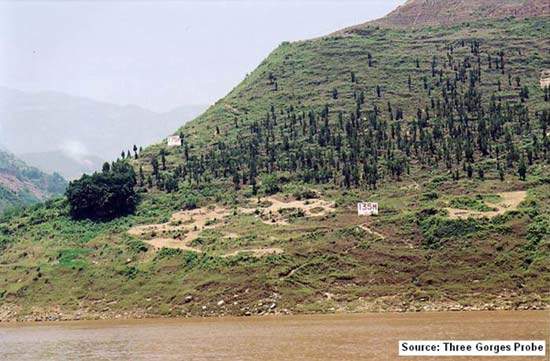 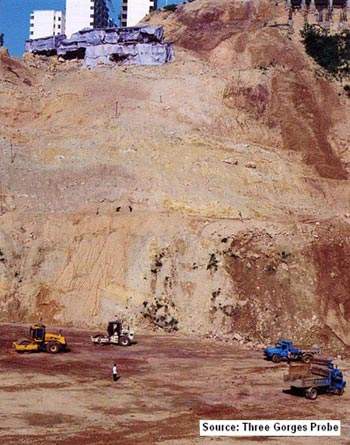 Construction begins on the wastewater treatment plant in Wushan (May 2003). A total of 170 WWTPs are scheduled to be built under the combined initiatives.

Building on their earlier strategic partnership established in 2005, this set up a 50/50 joint venture between the Water Company of Chongqing and the Suez subsidiary, Sino-French Water Development. to implement a major new wastewater treatment initiative in the region.

The scheme, which involves the construction of a new 300,000m³/day WWTP at Tangjiatuo and the provision of wastewater services in the Jiang Bei and Yubei sectors of the city over a 25 year period, will cost US$72.5 million and is to be majority-financed in local currency.

“20 wastewater treatment plants built in the area are part of a series of initiatives to address pollution in the region.”

Chongqing municipality’s urban environment project – a radical improvement to the treatment of both domestic and industrial wastewaters, together with the implementation of integrated solid waste management – has an anticipated total cost of $500 million. In June 2000, the World Bank approved a $250 million soft loan, the remainder being financed by the Government and the China State Development Bank.

However, while the dam itself has been delivered ahead of schedule, the schemes intended to address water pollution in the reservoir area have generally been less successful.

With a population of 32 million, Chongqing is one of China’s four largest cities and is located on the Yangtze River, upstream of the Three Gorges Dam – the world’s largest hydro-electric project. Work on this $30 billion scheme began in 1993 and the human cost – perhaps as many as 1.5 million people displaced and 115 towns submerged – and the enormous environmental impact have ensured it remains a highly charged and controversial development to this day.

The project is intended partly to help meet China’s growing energy needs and partly to alleviate the often catastrophic flooding in the middle reaches of the river, although some have questioned the effectiveness of the project in achieving either of these aims.

Whatever the rights and wrongs of those particular questions, the deteriorating state of the water remains a clear concern and the provision of adequate wastewater treatment presents a major environmental challenge.

“Over 3,000 factories and quarries discharge around 1 billion tonnes of effluent per year.”

Over 3,000 factories and quarries discharge around 1 billion tonnes of effluent per year together with nearly 9,000t of toxic pollutants of various types, including large amounts of lead and mercury. Chongqing itself adds almost another billion tonnes of wastewater, 80% of which is untreated. With the damming causing an inevitable decrease in the river’s flow rate, this material – previously flushed out by the fast-moving water – began to collect.

In 2004 – the year after the dam was filled to its interim depth – the situation had noticeably worsened. According to the Chongqing water resources bureau, serious pollution rendered around a quarter of the area’s 207 tributaries of the Yangtze and Jialing rivers essentially useless as water resources.

China’s national environment agency acknowledged that levels of industrial pollution were rising, water quality had declined and almost none of the polluters placed under an earlier notice to clean up their operations had complied.

In addition, the State Environmental Protection Administration report revealed that over 65% of enterprises due to be shut down were still operating and more than a third of the planned major treatment programmes had yet to be started.

In addition to the provision of new WWTPs, the Chongqing urban environment project will also create a number of sanitary landfill sites to help deal with the 16 million tonnes of untreated solid waste routinely dumped in the area each year.

This may itself benefit water quality; it was estimated that around 3 million tonnes of this had simply been submerged beneath the rising waters in 2003, leading some to suggest a link between these sunken deposits and the pollution experienced the following year.

The project has other components in the adjacent urban centres of Wanxian and Fuling, together with pilot schemes in Qianjiang, including installing pump stations, sewers and storm-water collection, along with establishing monitoring and management systems.

Two of the WWTPs have been successfully built in metropolitan Chongqing at a cost of $375 million. The first plant, in the Beipei district of the city, was built as a pilot scheme. Designed to provide primary treatment to 55,000m³/day, it uses UV disinfection – chosen to avoid adding further chemicals to the waters. The region’s remaining 18 further plants (with a total budget of $262 million) are also either nearing completion or under construction.

“Of 170 WWTPs scheduled for construction, only a small number are operational.”

As a result, the city itself has sufficient capacity to treat some 60% of its wastewater, with the rest of the reservoir area approaching 70% capability. However, although the installed capacity exists, actual rates of treatment remain disappointing, largely as a result of the slower progress of some of the subsidiary elements of the project – particularly collection systems.

Of the 170 WWTPs scheduled for construction under the Yangtze’s combined initiatives, only a small number are actually operational and estimates suggest that the work is unlikely to be completed before 2010.

In the Wanzhou district, only half the wastewater treatment system at the Mingjingtan treatment plant is in use, while, the district’s largest treatment plant, Shenmingba, is un-finished. The plant at Wushan, 75 miles upstream of the dam, is also still under construction – the city’s raw wastewater being discharged untreated into the Yangtze. In addition, some of those which have been built are set at the final reservoir level of 175m, which will not be reached until the dam is finished in 2009.

While water quality in the Yangtze itself is reported to have improved, the situation in its tributaries has worsened, as pollutants from the main channel intrude into their lower reaches. Many of the tributaries are now rated grade five or lower under the Chinese system – which does not take coliform bacteria into account – officially classified as unfit for any economic purpose, including irrigation.

The Water Company of Chongqing and Sino-French Water Development (itself a 50/50 joint venture between SUEZ and the New World Group of Hong Kong) are JV partners in the newly agreed Tangjiatuo element of the wastewater provision project. The Ministry of Water Resources and Electric Power together with China’s State Power Grid Development Company are the sponsors of the Three Gorges dam project.

China Yangtze Three Gorges Project Development Corporation is responsible for the overall management of the larger project. Bermad are supplying water and power command and control systems; the shiplift design is by Lahmeyer and Krebs und Kiefer.