Douglas, Onchan, Braddan and the south of the island 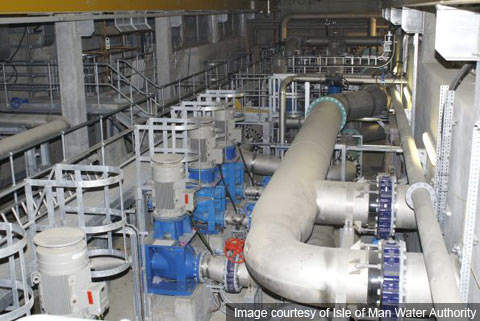 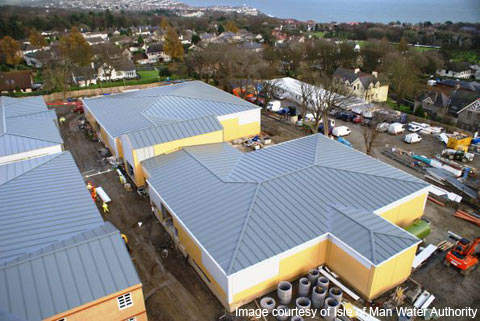 The aerial photograph of the plant during construction shows its proximity to a largely residential area: both the design and construction were deliberately planned to minimise local disruption. 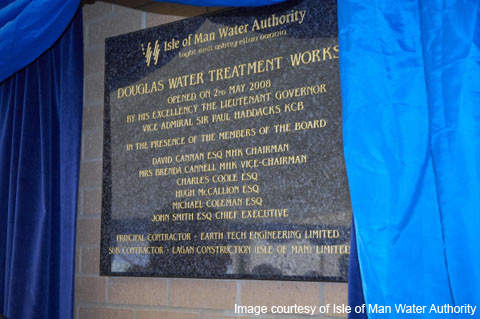 The plaque unveiled at the plant’s official opening in May 2008. 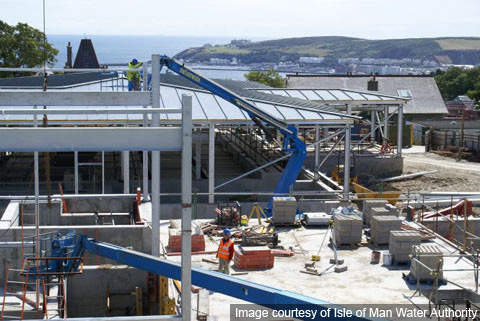 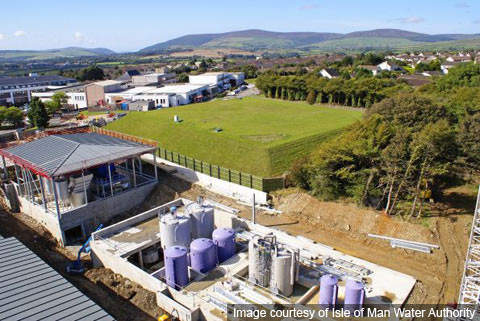 Looking over the site in September 2006. 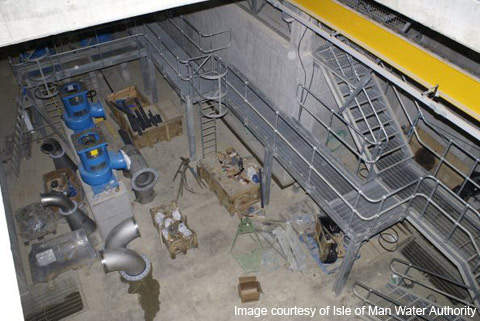 Inside the plant as it takes shape in January 2007.

The official opening of the new Douglas WTP in May 2008 marks the end of a three-year scheme of work which saw the plant finished ahead of schedule and on budget. Building the new works formed the main element of the Crystal Project, which itself is part of the Isle of Man’s ongoing major infrastructure refurbishment programme and will meet the bulk of the needs of the island’s projected population to the year 2021.

The IoM Water Authority awarded the contract for this part of the project – their largest capital project to date – to Earth Tech.

In addition to the new treatment facility, the project had two other components under separate contracts. Both of these involved the construction of new pipelines – one to take raw water from West Baldwin reservoir and the other as a new treated-water mains leading to Cronk ny Mona reservoir.

In June 1999 the total figure approved by Tynwald – the Isle of Man Government – to fund essential infrastructure improvements was £131 million. The cost of the new Douglas WTP was£25 million and the smaller Sulby plant £12.3 million.

The Isle of Man Water Authority is responsible for collecting, treating and distributing some 10,000 million litres of water – around 26 million litres of water per day in the winter and approaching 35 million in the summer – to 31,000 connections over an area of 250 square miles. The system consists of ten upland reservoirs, five treatment works, 33 underground treated water service reservoirs, over 40 miles of large diameter raw water mains and 750 miles of treated water mains.

Prior to the formation of the Authority in 1972, much of the island’s water supply system had been run independently by a number of small regional water boards. As a result, the new authority inherited a complex system of mains, service reservoirs and pumping stations, much of which was antiquated. Many of the reservoirs and pumping stations dated from the 40s and 50s, while some of the mains were a century older.

The increased demands of a growing population have inevitably placed significant strain on the island’s ageing systems. In addition, the inability of these facilities to guarantee the removal of mineral deposits from the raw water led to an escalating number of complaints about discoloured water.

Driven by increasingly stringent EU regulation, in June 1999 the Tynwald formally adopted a strategic plan for the replacement and refurbishment of the infrastructure. At the time, the target date was set at 2016 and the corresponding population projection taken at 81,000. However, later studies subsequently led to a revision – the design horizon was reset to 2021 and the projection population accordingly adjusted to 90,000, with parallel modification of the daily per capita usage from 150l in 2016, to an anticipated 185l by 2021.

With something in the region of 60% of the IoM’s drinking water coming from a single ageing WTP – Douglas’ Glencrutchery Works – replacing this plant was of clear national strategic importance. In October 2004, 70 years after the plant it is to supplant was constructed, planning approval was obtained for this new facility at Homefield Road.

The contract for the WTP was awarded in May 2005 and work began the following month. Construction began on the raw water and treated water lines in January and June 2006, respectively; the former was completed in August and the latter was finished in December. The plant was completed in October 2007 and commissioned in the following January, before being officially inaugurated in May.

The recently decommissioned Glencrutchery plant, like the island’s other four plants, used single-stage treatment. This, coupled with the failures caused by age and embrittlement of the work’s pipes and filters has been implicated in the rising discolouration complaints. In addition, single-stage systems cannot deal effectively with Cryptosporidium and also have inherent difficulty controlling trihalomethane formation.

To address these issues in line with the need to meet the new compliance standards, the new plant uses three-stage Dissolved Air Flotation (DAF). This approach has a number of merits. Firstly, it has a proven efficiency in removing the sort of small colouring particulates from raw water which pose a problem in this instance. Secondly, since it is faster than traditional alternatives such as sedimentation and filtration, it requires smaller tanks and vessels to clarify a given volume of
water, which can lead to a significant reduction in construction costs.

In addition, chemical costs are also typically lower as flotation generally demands less pre-treatment to form a light, small floc. The sludge solids produced from this process are subsequently distributed to local farmers for agricultural purposes.

The facility is located in a largely residential area, near to the Isle of Man College. Accordingly, both the design and construction regime reflected the need to minimise disruption to neighbouring residents. Three new buildings were constructed partially below ground level in order to reduce the overall height and provide additional acoustic shielding. Approximately 16,000m³ of soil and rock needed to be removed for the process building, while the sludge and chemical buildings also required significant excavation.

Operational efficiency and sustainability were important design criteria. The plant has been integrated into the Central Telemetry System (CTS) recently installed throughout the island to monitor the entire water supply network. The final facility also incorporates avariety of sustainable design features, including sun pipes and grey water recycling; in addition, recycled sustainable products have been used throughout the site, wherever practicable.

The completed plant supplies Douglas, Onchan, Braddan and the South of the Island.

Earth Tech Engineering was the main contractor, working for the Isle of Man Water Authority, with Lagan Construction as the civil engineering sub-contractor, and site excavation work being done by JCK. Island Drainage &amp Groundwork were the contractor for the new raw water main. Mann Construction was responsible for the treated water pipeline – a part of the project being implemented in partnership with Manx Gas. Mitsubishi Electric provided the telemetry and PLCs throughout the authority’s refurbishment projects, to install an integrated CTS for the island.