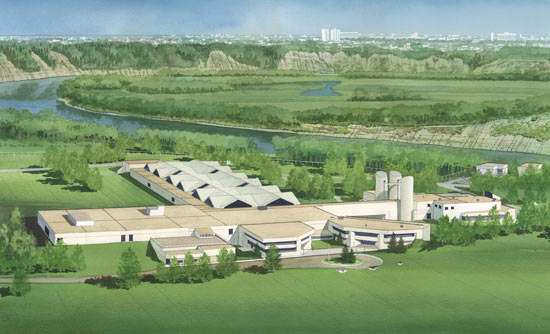 Artist's impression of the finished plant. The city of Edmonton lies some 11 miles downstream; the upgrading of the facility has provided a 25% increase in the available drinking water in the area. 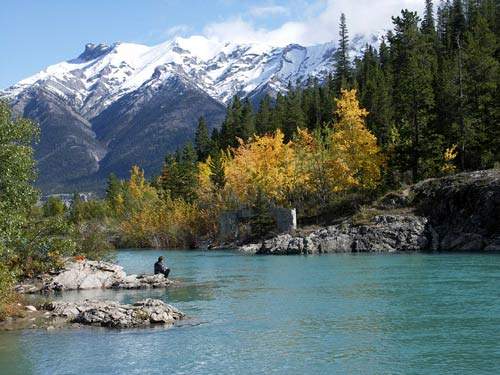 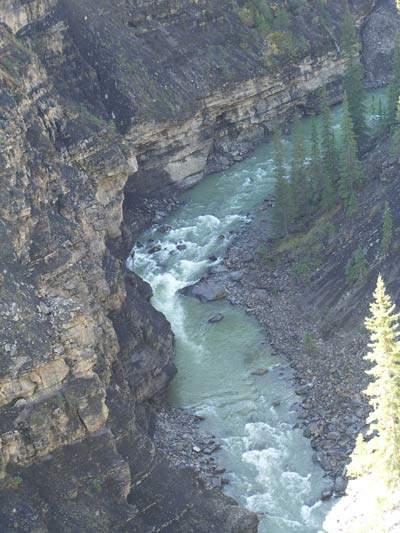 The major three-year upgrade of the EL Smith water treatment plant (WTP), which started in 2006, ended in early 2008 with the capacity almost doubled. It yielded a 25% increase in potable water available to the Edmonton service area to meet the demand for at least the next 15 years.

Using a unique partnership approach to design and construction, in addition to safeguarding the continuity of future supply, the project also bolstered the response to seasonal challenges such as spring-run-off and periods of drought.

The work at the plant involved upgrades to the treatment process and filters, the installation of a new disinfection system and a series of general site improvements. The overall project additionally included the construction of a new river water intake, pump house and transmission line.

Some temporary civil work was also required. To allow a water pipe to be installed, a portion of the North Saskatchewan River had to be blocked off with sheet piling and, subsequently, a temporary bridge and enclosure structure erected to permit the new concrete intake to be constructed on the river bed.

Located by the North Saskatchewan River, some 11 miles (18km) upstream of Edmonton, the EL Smith WTP is one of the city’s two treatment plants. An earlier proposed upgrade to the facility, originally built in 1976, was deferred in 1991, as reduced summer peak demands, decreased commercial consumption and a re-evaluation of anticipated regional population growth had lessened the immediate need.

“The project will bolster the response to seasonal challenges such as periods of drought.”

In the following years, EPCOR – the plant’s owner/operators, responsible for the supply to the city itself and 45 outlying regional communities – undertook an extensive programme to encourage water conservation, improve quality and optimise the plant.

While water consumption per customer has been very successfully reduced as a result and the optimisation work has enabled the plant to achieve 20% higher production than its original design specification, this was largely offset by steady regional growth.

Forecasts predicted that the population in the Edmonton Capital region would approach 1.1 million by 2009, upgrading the EL Smith works gained renewed impetus.

Despite increasing its capacity to 400 million litres a day, the project only calls for a minimal expansion of the plant footprint, with improvements and further optimisation to the treatment process playing a significant part in making this possible.

Apart from the modifications to the filtration provision and other general improvements, the plant upgrade saw the replacement of the existing standard chlorine tonner disinfection system with a new facility producing sodium hypochlorite onsite. The UV disinfection system – said to be the largest in the world when it was installed in 2002 – has additional capacity added with a 1,200mm next-generation UV disinfection reactor from Calgon Carbon.

In addition, the wider project required the installation of 155m long x 1,600mm twin raw water lines connected to a 955 million litres a day intake structure, equipped with a unique fish return system to protect local fish stocks. An extension to the transmission main was also installed to increase service to the rapidly expanding population in the south and south east, requiring the construction of a 560m-long transmission tunnel 10m under the North Saskatchewan River.

“The source of Edmonton’s drinking water is the Saskatchewan Glacier in the Columbia Icefields.”

Mitigating any potential environmental impacts from the work featured in the project planning from the outset. Alberta’s North Saskatchewan River Basin, covering an area of some 28,000km² upstream of Edmonton, is an area of outstanding natural beauty and uniqueness.

In addition to the routine programmes of watershed monitoring and protection, EPCOR set out to ensure that all the work undertaken as part of the project was designed to minimise its effect on the watershed and surrounding environment. Construction was also planned so that the local communities would experience the least possible disruption.

Several governmental regulatory agencies were involved in consultations to achieve these goals, with comprehensive sedimentation and erosion control plans developed to minimise damage to the environment. Tunnelling work under the river was assessed to have little impact on the local habitat.

After completion of the work in 2008, EPCOR and Associated Engineering won the Alberta Emerald Award for environmental leadership for the plant upgrades in the large business category.

Treatment at the plant employs the conventional steps of coagulation, flocculation and filtration.

Raw water is drawn from the deepest part of the river via intakes and passes through screens before entering the low lift pump station, which directs water into the treatment plant. At this point, alum, primary polymer and powdered activated carbon are added, on-line analysers allowing the dosage to be adjusted as required. After a high intensity rapid agitation to distribute these additions, the water is mixed more slowly to encourage floc formation within the clarifying basin. The flocculation / sedimentation phase detention period takes between two to four hours.

“Treatment at the plant employs the conventional steps of coagulation, flocculation and filtration.”

Subsequently, filter polymer – which helps improve particulate removal – and chlorine are added, the flow then passing to dual media gravity filters. UV sterilisation follows before the water is dosed with ammonia, fluoride and sodium hydroxide.

The ammonia combines with the chlorine to form monochloramine, which acts as a persistent disinfectant in the system. The fluoride brings the river water’s natural 0.15mg/l of fluoride up to the 0.8mg/l recommended by Health Canada. The sodium hydroxide is added to raise water pH to minimise corrosion and reduce the potential leaching of lead, iron and copper.

Finished water flows into a holding reservoir, before finally entering the distribution system.

EPCOR is the plant owner/operator. Design assistance on the project was provided by Associated Engineering, with a range of general contractors including Clark Builders, Sureform, Lockerbie & Hole providing construction services. The City of Edmonton Drainage Branch was responsible for the tunnelling and water main installation.