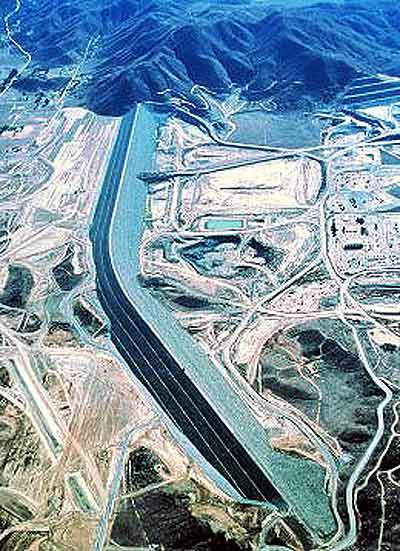 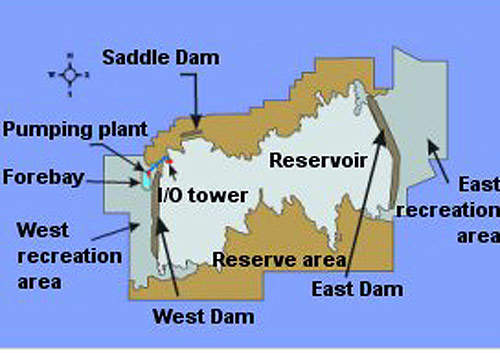 Map of the Eastside Reservoir project. 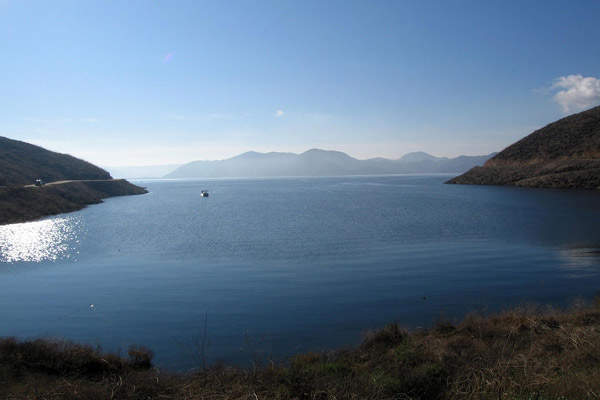 Diamond Valley Lake is the largest reservoir in Southern California and has a capacity to hold about 800,000 acre-feet of water. 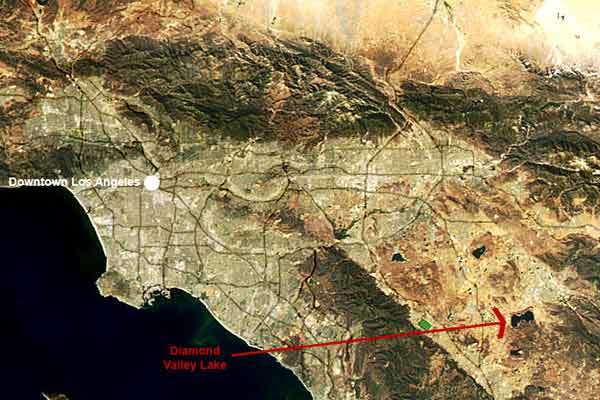 Three earth-core rock-fill dams are made from soil and rock materials obtained from borrow areas within the confines of the project.

The Eastside Reservoir is built in the saddle of two mountains and located in the Domenigoni, or Diamond valleys, in Riverside County about 90 miles (145km) southeast of Los Angeles, California, US. The Eastside Reservoir project is named Diamond Valley Lake and has been supplying water to the region for the past 60 years.

Although construction of the three dams in the Eastside Reservoir project finished in 1999, the process of filling the 4,500-acre reservoir site was completed in early 2002.

The main aim of the project was to help the MWD meet its seasonal, drought and emergency needs. When full, the reservoir is capable of supplying most of southern California with six months worth of water in an emergency.

The project’s three dams, the longest of which extends more than two miles, required an embankment volume of more than 84 million cubic metres of earth and rock. The process of filling the reservoir, which inundated 4,500 acres of land, began in November 1999 and took around three years. It was filled using an inlet / outlet tower with a peak rate filling capacity of 1,000 cubic feet per second.

The water from the Colorado River Aqueduct is delivered to reservoir forebay through the San Diego Canal from where it is pumped to the Diamond Valley Lake reservoir.

The other source of water is from the California State Water Project, which draws water from Silverwood Lake into the reservoir by gravity. The project equips 12 pumps, each with a power capacity of 5,000hp (3.7MW). A hydraulic control structure of 1,000ft³ per second (28m³ per second) capacity has also been built at the Colorado River Aqueduct for the water transfer.

Extensive foundation excavation was needed for the dams, which also required careful placement of embankment material to enclose portions of two valleys between a pair of bedrock ridges.

The reservoir’s south rim is formed by a broad bedrock highland with peaks as high as 1,100ft (335m) above the valley within a mile of the reservoir.

The embankment designs of the three Eastside Reservoir dams are similar. The upstream and downstream slopes of the rock-fill shells are two horizontal to one vertical. The crest widths of the West and East dams are 40ft (12m) and the crest width of the Saddle Dam is 30ft (9m).

The planning and site selection studies for the Eastside Reservoir began in 1987 with design studies starting in early 1993. The first major construction contract for the excavation of the West Dam foundation was awarded in May 1995, and construction of the East Dam began early in 1996. All three dams were completed in December 1999 and the reservoir was filled by 2002.

Around 65% of the dam’s foundation area is founded on quartzite and phyllite bedrock; the remainder is founded on dense alluvium that fills the three buried channels, which are up to 120ft (37m) deep. The foundation excavations were extended 90ft (27m) below the original ground surface to remove the liquefiable soils.

To minimise foundation seepage through the alluvium, 3ft (0.9m) thick cut-off walls of plastic concrete were constructed across the three alluvial channels and excavated at least 2ft (0.6m) into bedrock.

To reduce seepage through the rock foundation the entire core width was consolidation grouted and a double-line grout curtain was installed to a depth of approximately 125ft (38m).

The West Dam grouting took about two years to complete and required one million feet (304,800m) of grout holes.

The 2.1-mile East Dam, constructed by a Kiewit-led joint venture, is the longest of the three dams. It measures 185ft (56m) long, 1,200ft wide at the base and 40ft wide at the top. Before embankment of the dam could begin, more than 18 million cubic yards of alluvium had to be excavated to reach a solid bedrock foundation.

“More than 18 million cubic yards of alluvium had to be excavated to reach a solid bedrock foundation.”

The embankment required 43 million cubic yards of crushed rock. An on-site crushing plant crushed and processed over 14 million tons of rock in 20 months to supply the dam’s materials.

A two-line grout curtain reaches depths of 150ft (46m) below the foundation in the north segment of the East Dam and 100ft (30m) in the south segment.

The Saddle Dam is founded completely on phyllite and schist bedrock. To minimise foundation seepage, a two-line grout curtain extends up to 100ft (30m) below the foundation.

The MWD of Southern California is a consortium of 26 cities and water districts that provides drinking water to nearly 18 million people in parts of Los Angeles, Orange County, San Diego, Riverside, San Bernardino and Ventura counties.

Metropolitan currently delivers an average of 1.7 billion gallons of water per day to a 5,200 square mile service area.