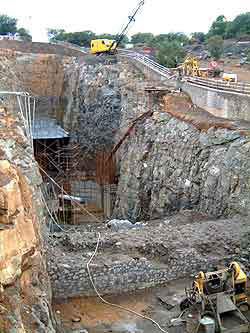 The entrance of the water tunnel from the upper to the lower dam. 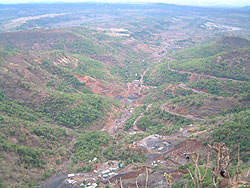 View from the level of the upper dam of valley in which the lower dam will be installed - the dam foundations can already been seen.

The State Government of Maharashtra announced in its 2002/03 budget that it proposed an additional 654.25MW of installed capacity for its hydroelectric projects. This included 250MW for the Ghatghar Pumped Storage Hydro Electric Project as well as 391.5MW for the Sardar Sarovar scheme, an interstate project that will benefit Gujarat and Rajasthan as well as Maharashtra. Increasing demand for both drinking water and electricity due to a growing population in Maharashtra has led to an increase in hydro power projects.

Maharashtra is the third largest state of India, in area as well as in population. In shape it is four sided with the western side on the Arabian Sea. The smallest side is the eastern side, which borders Madhya Pradesh, with Gujarat to the north and Andhra Pradesh, Karnataka and Goa to the south.

The Ghataghar Dams Project is located on the boundary of the Thane and Ahamadnagar districts of the Maharashtra State. The lower reservoir and surge well is located in the Sahyadri Range near the village of Chonde, Taluka Shahpur.

Having started in 1994, the Ghatagr Dams Project, due for completion in 2005, is the first major dam construction in India to use fly ash as a major constituent.

Funded by the Overseas Economic Cooperation Fund (OECF) of Japan, the £40 million Ghatghar Pumped Storage Scheme is also the first of its kind in the Maharashtra State being undertaken by the State Government’s Irrigation Department.

The scheme involves the construction of two reservoirs. Both upper and lower reservoirs are constructed in Roller Compacted Concrete (RCC). This is the first time this method has been used in India. The water transmission system consists of an approach channel, intake structure and a pressure shaft that will take the water to the underground turbine house to feed two reversible units. The tailrace discharge from the turbine house is taken through the common tailrace tunnel to the lower pond.

The principal contractor for the overall programme is Japan’s Nissho Iwai Corp, with Japanese engineering company, J-Power, providing project management throughout. J-Power also provided consultancy in 1994 prior to the construction phase, which started in 1995.

Dirk India Ltd is supplying more than 80,000t of Pozzocrete to the project. As part of the agreement with Dirk India, civil engineers, Patel Engineering has agreed to use Pozzocrete on any other relevant projects for a five-year period until 2007.

A downstream vertical shaft of 130m with an 11m diameter had to be excavated near the lower reservoir. Initially it was decided to sink the shaft with conventional blasting methods but due to the time this was taking and the risk to personnel it was decided to excavate a pilot shaft so as to accomplish the final widening by slashing.

The Central Mining Research Institute (CMRI) in Nagpur designed the blasting method for the excavation of the 122m-deep pilot shaft, which was carried out by contractor R.J. Shah and Co from Bombay. The excavation was carried out by long hole raise blasting. The drilling was carried out using a Wagon drill. Long hole raise blasting is considered one of the most economic vertical shaft methods. It is safe and does not involve cumbersome procedures. It does, however, require a meticulous drilling and blasting strategy. In the Ghataghar vertical shaft, the final 85m was blasted in only 20 days.

Fuji Electric is supplying two 125MW vertical Francis pump-turbines along with a generator-motor and control equipment to the high head, large capacity pumped storage scheme. The two reversible pump turbine and generator motor units will be located in the underground powerhouse complex.

Hyderabad-based Bharat Heavy Electricals Limited (BHEL) has tied up with Nissho Iwai Corporation and Fuji Electric to carry out the installation of the hydro power generating equipment.

The Maharashtra Engineering Research Institue in Nashik carried out both physical and chemical tests on the Fly ash being used in the RCC Dams.