The installation of the new BioBed Modular Plant in October 2001. 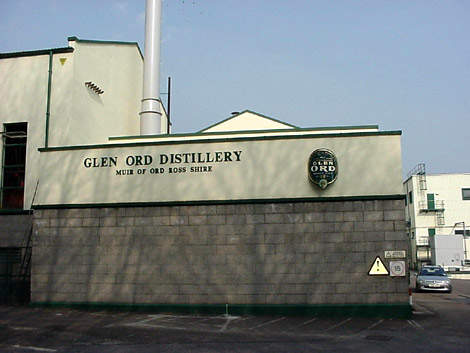 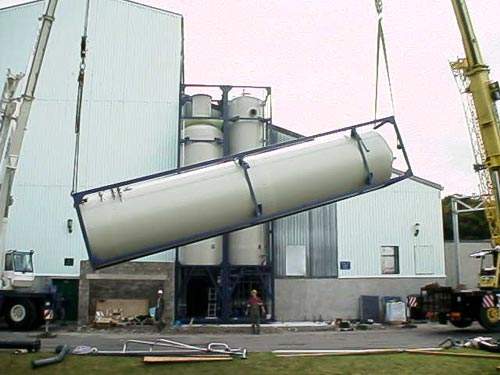 Installation of one of the modules. The pre-engineered design and modular approach is the key to the system's ability to provide cost effective treatment for low COD load effluents. 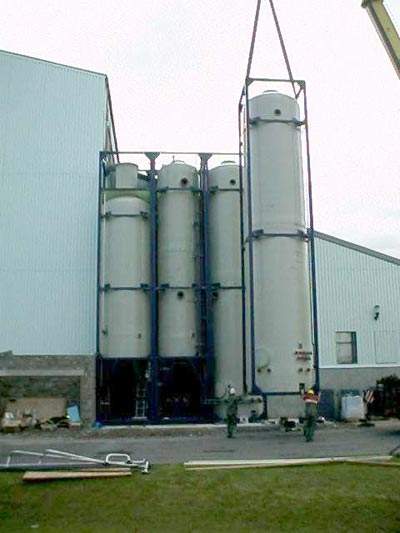 The final module is manoeuvred into place beside the malting works. 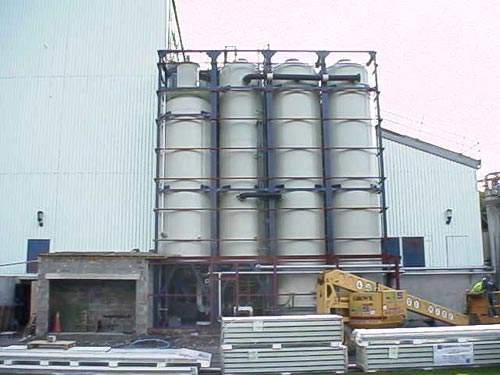 The completed installation, awaiting the erection of steel cladding. The plant has been integrated very effectively into the site's pre-existing elements. 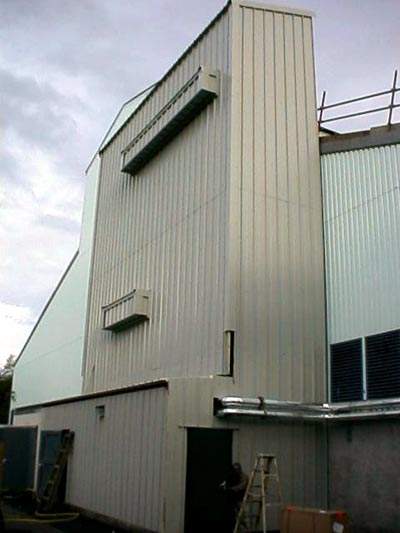 After the cladding. From start to finish, installation took only two weeks.

In 2001, the Glen Ord Whisky Distillery became the first company in the UK to use the new Biobed Modular Plant (MP) technology, a pioneering application of high-rate anaerobic granular treatment for wastewater with low chemical oxygen demand (COD) loads. Developed by Biothane Systems International, the Biobed MP is an extension of the expanded granular sludge bed (EGSB) – itself a second-generation process arising from the upflow anaerobic sludge blanket (UASB) which was developed by Gist-brocades in the early 1980s.

The plant has a treatment capacity of 1,000kg COD/day and receives a maximum flow of 908m³/d. Since installation, the plant has been consistently treating the distillery’s effluent to meet discharge consent, achieving BOD and COD reductions routinely exceeding 90% and 80% respectively.

Although no plans exist to extend the system to other distilleries in the same ownership in the immediate future, the issue of effluent treatment remains an important one, especially in the nearby Speyside region. The success of the Biobed at Glen Ord is ultimately expected to have a major influence on the industry.

Both systems promote anaerobic bacterial growth within a granular matrix and have tended to be used only for effluent streams with mid-to-high COD loads, largely as a result of the relatively high investment required to produce custom-sized treatment plants.

However, by employing a fully pre-engineered design concept, the Biobed MP, it is possible to extend granular anaerobic technology to small COD loads, below the previous typical 3,000kg/d threshold. The innovative step which makes this economically viable relies on the high turn-down ratio of the technology – exploiting the system’s inherent ability to deal with fluctuating COD – rather than the traditional approach of designing to a specific COD load. This enables concentrations ranging between 1,300mg/l to 40,000mg/l to be treated effectively.

At the heart of the system lies the 50m³ reactor module and a conditioning tank. Plant capacity is increased by the addition of further modules and effluent polishing can be enhanced by the installation of a flash aeration module. Pre-fabrication leads to a short delivery time – typically four to six months – and delivery to anywhere in the world is made simple using standard container transportation.

Biothane won the IWEX innovation award for their Biobed system in 2001.

In 1995, the distillery’s owners began to explore improved wastewater treatment methods and examined a number of options including high-rate biofiltration and sequencing batch reactors before finally selecting the Biobed process. This decision was heavily influenced by the low volume of biosolid residuals characteristic of anaerobic systems – which means significantly lower disposal costs – coupled with the plant’s small footprint, low energy requirement and treatment efficiency.

The wastewater first passes through a 500µm filter before entering an equalization tank. From here it is directed to the conditioning tank of the Biobed system where it is diluted with previously treated effluent to maintain a constant flow rate entering the reactor. The temperature, pH, nitrogen content and iron levels of the effluent are also adjusted and micronutrients added as necessary, prior to the anaerobic phase. The flow is then pumped into the two reactors for treatment.

Subsequently, the treated effluent flows under gravity to the flash aeration module, as a final polishing phase to remove sulphides and odour before discharge.

Methane-rich biogas arising as a by-product of the anaerobic processing is separated from the treated effluent by a patented three-phase separator at the top of the reactor and collected for use in a boiler to heat the incoming wastewater, maintaining the operating temperature between 25°C and 30°C.

There are two distinct processes at Glen Ord which contribute to the production of wastewater: the distillery itself, which operates five days a week, and malting, which runs on the full seven. To accommodate the inevitable fluctuation this causes, effluent recycling is stepped up to maintain a constant hydraulic load.

The treatment plant has integrated very well, both physically and operationally with the established elements on site. It sits against the malting works, the battery of tall modules contained inside a steel clad building – an arrangement which significantly minimises the visual impact. In addition, process control on the anaerobic system has been integrated into the malting operation SCADA graphic screens, allowing simultaneous monitoring of flow rates and gas production and establishing alarms on critical parameters.

The Biobed system offers a number of advantages over alternative treatment approaches, with simplicity and flexibility being the key. There are only two major components within the reactor, namely the settlers in the top of the tank and the feed distribution at the bottom, which greatly simplifies operation and leads to reduced maintenance requirements and down-time. The settler design accommodates high liquid and gas velocities, without the need for external clarification and the high re-circulation ratios within the tank provide an effective hydraulic balancing capacity. The influent feed distribution system has multiple inlet points, thus ensuring maximum wastewater to sludge contact and avoiding the formation of channels or hot-spots, which reduce efficiency. In addition, the sealed nature of the reactor prevents odour nuisance, which is an important consideration for a works that is also a major tourist attraction.

After several years of operation – the plant was installed in just two weeks during October 2001 – the treatment efficiency and reliability achieved from the outset has remained consistent.

The Distillery is owned by UDV (Diageo). Biothane Systems International supplied the technology and Glen Ord personnel are responsible for managing the day-to-day operation of the plant.