Rehabilitate the four pumping stations between Deir Allah and the Zai WTP; increase pumping capacity by 20% 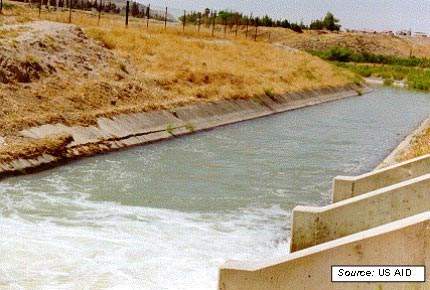 The King Abdullah Canal. A $70m project increased the amount of water pumped to Amman along this the canal to 90 million cubic metres a year. 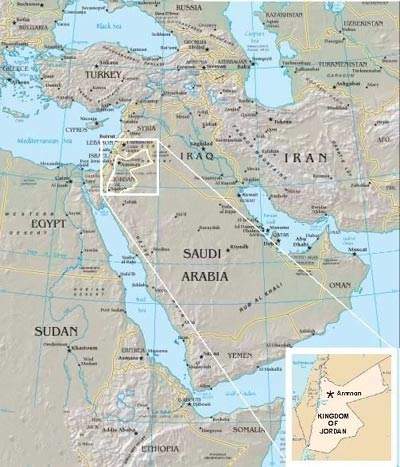 Jordan's position in the Middle East. The kingdom is one of the most water-scarce countries in the world and its annual per capita water allowance lags significantly behind other countries in the region, especially its near neighbours Israel, Syria and Egypt. 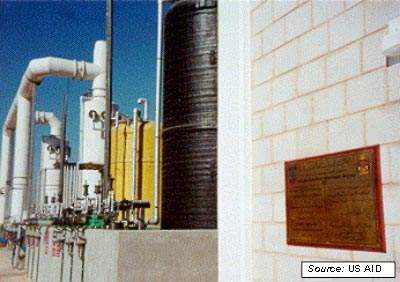 Multi-donor collaboration has funded a number of projects throughout Jordan, including new treatment plants and major repairs to the existing facilities and infrastructure. 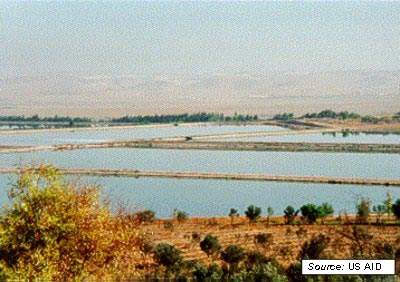 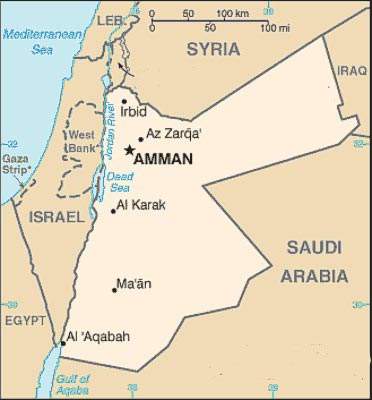 Amman has particular water supply problems. A third of the kingdom's total inhabitants live within the Greater Amman area. 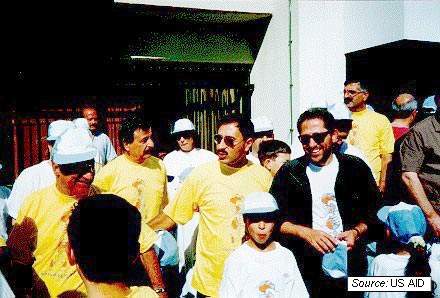 A public awareness walk at Amman's Water Use Conservation Festival. A long-term programme of such events has made a significant contribution to reducing water wastage in the city. 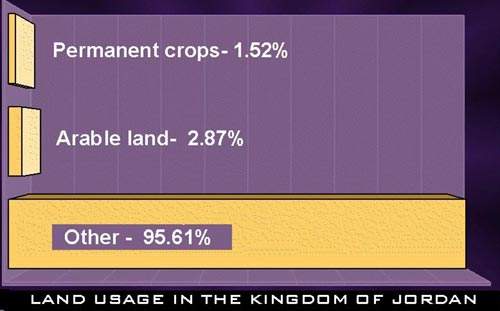 On 9 March 2004, the European Union and the Kingdom of Jordan signed an agreement for a further €2m of assistance to support the country’s ongoing programme to improve water supply. This was in addition to a long line of contributions of a collaborative effort from a number of sources since 1994, including the World Bank, the US, Japan and Libya, together with some that came direct from individual EU Member States.

The US Government alone has given $420m in grant aid to the Jordanian water sector since 1993, and a total of some $630m in grants and loans was secured from various sources for projects to be implemented during the five-year period from 1999 to 2004. Over 80% of this has provided critically needed water and wastewater infrastructure. The remainder has largely been used to support a number of important policy changes and finance capital investment, operation and maintenance.

This EU funding was intended to help improve water management, reduce water losses and substantially upgrade the quality of water services in various parts of the kingdom. A significant portion of this was directed to the project instigated in 1996 to secure the water supply to the Greater Amman area.

The country’s required water sector investment to 2012 is estimated at around $5bn.

The scarcity of water in Jordan is widely seen as the single most important restriction on the country’s sustainable economic growth, particularly given the increasing population, which was nearly 5.97 million in July 2009 and is growing at a yearly rate of 3.22%. About 70% of the population is urban, with two million living within the Greater Amman area.

“The Kingdom of Jordan’s increasing population is growing at a yearly rate of 3.22%.”

Long-term solutions are likely to involve the development of new water supplies, most probably from outside its borders. Jordan already receives 60 cubic metres from Israel and while it would be possible to extend the existing buy-in arrangements, this source can only be realistically anticipated to provide a relatively modest additional contribution in the future, perhaps up to a further 20 million cubic metres.

Two major potential projects have been considered. The first involves importing water from Turkey; the second would require the construction of the “Red Sea-Dead Sea” canal, together with associated desalination facilities, and could increase water availability to both Jordan and Israel by as much as 850 million cubic metres annually. However, these would inevitably be huge undertakings, requiring enormous investment and taking many years to be realised.

The main aim of this project is to transfer water from Red Sea to Dead Sea besides generating hydroelectric power. The project is expected to cost $2bn to $4bn and will take 20 years to complete. The World Bank will fund the feasibility study that started in 2008 and is expected to be completed by 2011.

To make the best use of investment in the interim, Jordan has developed a 14-year, $5bn priority plan, aimed at alleviating the country’s growing water crisis in the short to medium term. This employs two main approaches to narrow the gap between supply and demand – firstly, improving water supply management, and secondly, increasing the efficiency of water use, thus making the most of the scarce resources available.

Amman’s water distribution has long been dogged by problems and many residents receive supply on just one day a week. Until very recently, over 50% of the water entering the city’s distribution system was effectively unaccounted for, with half of this being lost by leakage and the rest due to poor administration, inadequate billing and lax payment collection.

As a result of a series of initiatives designed to address these problems, leakage has been reduced to roughly a third. In addition, the efficiency of customer charging within the Greater Amman water distribution system has improved significantly, now yielding a 25% profit over operational and maintenance costs. Education campaigns have also been supported, which have been very successful in boosting greater consumer awareness of the country’s pressing water concerns.

“Amman’s water distribution has long been dogged by problems and many residents receive supply on just one day a week.

Despite these improvements, providing the city with additional volumes of water remains a priority. One of the major measures envisaged to achieve this is the Disi-Mudawwara project, which aims to construct a pipeline from the Disi aquifer on Jordan’s border with Saudi Arabia, to Amman, a distance of some 325km. This will provide the city with around 100 million cubic metres a year of water at an estimated base capital cost of $1bn.

The project is financed by Overseas Private Investment Corporation (OPIC), an independent US Government agency, and European Investment Bank (EIB). The project is being constructed by Gama Power Systems.

A total of 65 new boreholes will be created together with well field collectors, a 12,000m³ collector reservoir, a main pumping station and associated balancing tanks, a 16,600m³ regulating tank, a series of flow control stations, chlorination units and a terminal reservoir in Amman. Substantial operation and maintenance facilities will also be provided, including roadways, communication and telemetry services and electrical supply lines to the well field pumping stations.

The project’s progress has not been straightforward. The aquifer holds fossil water and, since it receives no modern-day replenishment, is an unsustainable source that is already showing signs of depletion and increasing salinity from existing extraction. Its position on the Saudi border also makes the issue of further exploitation politically sensitive.

A full feasibility study was completed in mid-1996, with preliminary design studies and geo-technical investigations completed the following year. Initial pre-qualifying bids on the build-own-operate-transfer contract were taken in late 2001 and final bids from two consortia opened on 20 August 2003, which were subsequently evaluated by Jordan’s Ministry of Water and Irrigation (MWI). The project was launched in August 2008.

The project has a tentative five-year timetable and funding is another multi-donor effort. Libya will pay for around half the cost of the pipeline, sponsor equity accounts for 15% of total construction costs, the World Bank will support the project through partial risk guarantee and the balance comes from private investors and external funding agencies.

A number of other projects have already been implemented. Major repairs and redesigns, including upgrades to the existing 80mm to 1,200mm diameter primary pipelines, reservoirs and pumping stations have been undertaken across the Greater Amman network. The Japanese government funded a $70m undertaking to increase the amount of water pumped to Amman through the King Abdullah Canal via the Balqa-based Zai water pumping station to 90 million cubic metres a year.

In September 2003, the contract was awarded to construct the Zara-Maain water supply and treatment plant, which promises to provide the city with an extra 38 million cubic metres a year – around 40% of Amman’s annual allocation – by 2005. This $125m project includes a pre-treatment system, desalination plant, a 40km water transmission pipeline and control systems.

Many parties have been involved in the various programme elements, including the Government of Jordan, the Jordan Valley Authority, Water Authority of Jordan, Ministry of Water and Irrigation and the Irrigation Advisory Service. Funding has come from the World Bank, the Arab Fund for Economic and Social Development, the United States Agency for International Development (USAID), the European Investment Bank, Kreditanstalt fuer Wiederaufbau, the European Union and a number of individual nations including Germany, Italy, Japan, Libya and the UK.