Government of Bahrain (Ministry of Electricity and Water)

Government of Bahrain (Ministry of Electricity and Water)
Expand 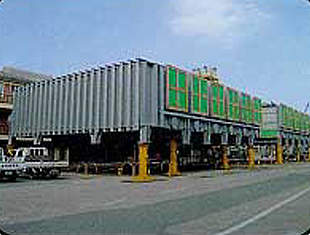 The desalination plant at Bahrain was part of the Bahraini Governmnet's $360 million project, which involves the construction of a power and desalination facility on the Muharraq Island.

The Government of Bahrain has instigated a $360 million project, involving the construction of the Al Hidd power and desalination facility on Muharraq Island. The project was undertaken by an international consortium, led by Black and Veatch, a US engineering and construction company. The first phase was to increase the power capacity of the island’s new gas fired power plant to 260MW.

Demand for both power and water in Bahrain has been approaching production capacity recently, with demand outstripping supply at a rate which would create major problems in the future if the government did not intervene. The construction of the Al Hidd plant is the first stage in trying to ease these pressures.

A report for the Electricity and Water Ministry was prepared by British consultants Mott Macdonald, and concluded that Bahrain will need an increased 400,000 cubic metres per day of potable water by the year 2005. The report recommended the construction of the three new water desalination stations, each with a capacity of 135,000 cubic metres per day, stating that Bahrain’s ground water supply would run dry in four years if measures were not taken.

The island’s former desalination capacity was 203,400 cubic metres per day, but the old plant treated brackish groundwater rather than the seawater which is being used to replace the diminishing water of the aquifer.

Consumption reached 101 million gallons per day in 1998, and is expected to hit 126 million gallons per day in 2005. Such levels, outstripping the capacity of the three previous plants, meant that water was being drawn from a threatened aquifer already brackish due to seawater infiltration. Seawater has in turn been increasing salt parts per million in the ground water.

The international consortium was composed of Black & Veatch (B&V), ABB of Sweden/Switzerland and Japan-based Hitachi Zosen Corporation. B&V was responsible for the provision of plant engineering and the supply of associated equipment. ABB supplied the turbine unit and Hitachi Zosen provided the desalination plant. The first phase of the combined facility began early in 1997, and was completed in mid-1999. The desalination plant treats seawater through a multistage flash process, and produces 30 million gallons per day.

Finally, the project required the installation of a 45km twin and single ductile iron transmission mains, as well as refurbishment of the existing blending stations to increase the capacities of existing facilities.