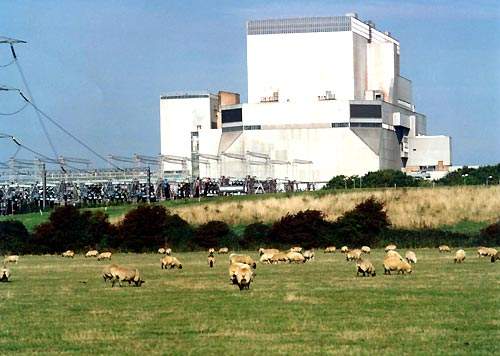 The outsourced water treatment plant at Hinkley Point B nuclear power station near Bridgwater in Somerset is the first of its kind to be installed at a British Energy site. 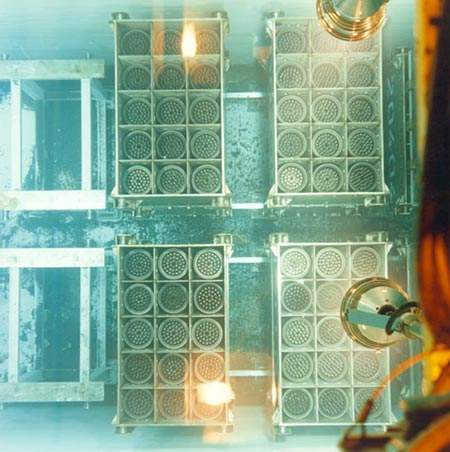 View of the cooling ponds from above. The treatment plant supplies ultra pure water for the fuel cooling ponds, the main boiler feed systems and a variety of auxiliary circuits. 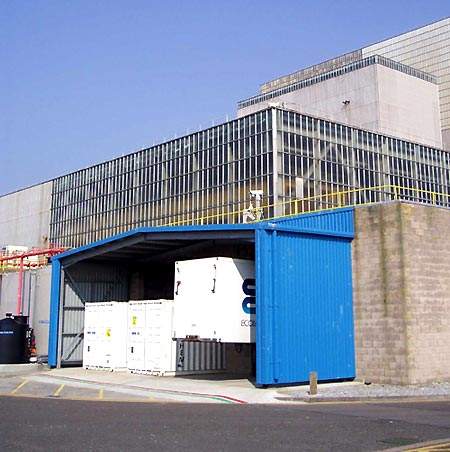 The plant fitted well into a previously redundant building on the site. 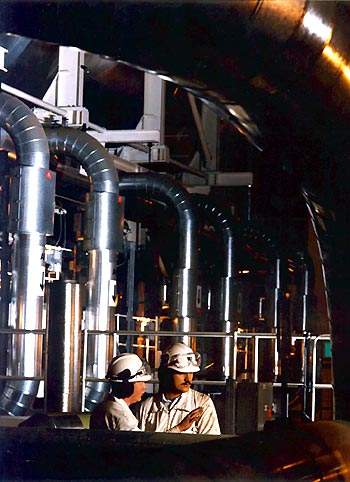 The boiler tubes; the new plant helps to protect the power station boilers by excluding organic matter and silica, which also extends the useful life of the anion resins used in the condensate polishing process. 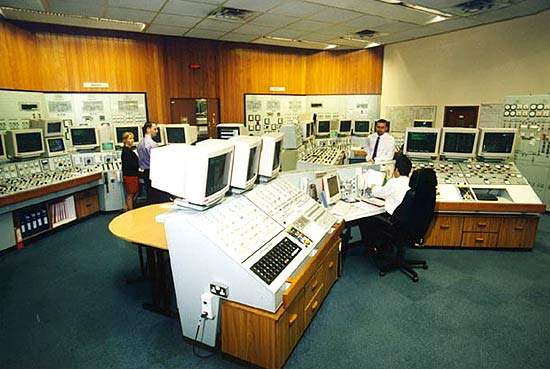 The power station control room; Hinkley Point B normally requires between 40m&#179;/hr and 45m&#179;/hr of ultra pure water for its main processes. A telemetry system and extensive monitoring ensure that water production is optimised. 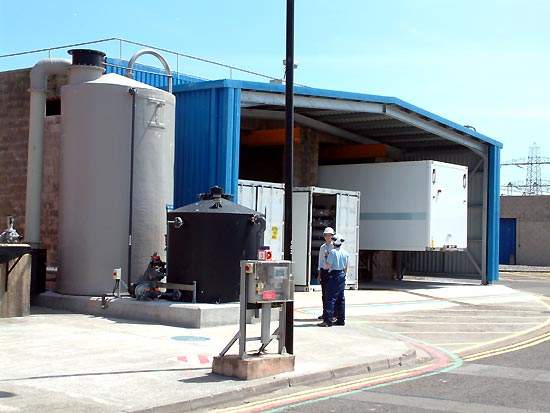 View of the plant showing the multi-flow tanks and containers.

Hinkley Point B at night. Ecolochem provide a guaranteed 24-hour-a-day, 365 days-a-year response, should the need arise.

The outsourced water treatment plant at Hinkley Point B nuclear power station, near Bridgwater in Somerset, passed a major milestone in 2004, successfully completing its first year of operation. Responsible for supplying ultra pure water to the main boiler feed systems, the fuel cooling ponds and a variety of auxiliary circuits, the treatment facility – the first of its kind to be installed at a British Energy site – is owned, operated and maintained by Ecolochem International.

The plant is modular in design, with treatment involving water softening, reverse osmosis and de-ionisation. In its first full year of operation, it has produced some 400,000t of high quality demineralised water, with consistent reliability and at a cost lower than had been anticipated.

With the power station’s own 30-year-old water production facility becoming increasingly unreliable and demanding in terms of maintenance and technical upkeep, a range of options were considered to meet the site’s ongoing need for ultra pure water. Refurbishing the aging plant was rejected due to the uncertain costs involved. Additional investment in a new treatment works was also deemed not to be a cost effective option, since the lack of space at the site would have committed the station to sourcing and purchasing alternative supplies of water during the period of demolition / replacement.

Outsourcing production guaranteed the provision of adequate quality water in the appropriate quantities for a fixed monthly charge, removing the power station from responsibility for operation and maintenance – two budget elements that had been growing with the old plant. A cost comparison, factored over the remaining life of the station, demonstrated the financial viability of the scheme and British Energy signed a long-term agreement with Ecolochem in January 2003.

Hinkley Point B normally requires between 40m³/hr to 45m³/hr of ultra pure water (otherwise known as “demin”) for its main processes and around a third of this is recovered and recycled for use in Condensate Polishing Plant (CPP) regeneration processes and also to wash live insulators at the 400kV sub-station. Having available supplies of demin water is crucially important, not least because it is also in demand for use in essential reactor cooling.

A number of benefits arise from the modular nature of the plant, both in respect of the flexibility to respond to changes in operating practice or feed water chemistry and the potential for easy implementation of any future improvements in treatment technology. The design includes filtration through particulate and activated carbon media, ion-exchange softening, single pass polyamide membrane reverse osmosis (RO) with ion-exchange polishing and off-site regeneration. The softening element was included in the package to extend membrane life, reduce the cleaning requirement, remove the need for pH correction and enhance efficiency.

The new plant is located in a previously redundant building on the site. By opting for remote regeneration rather than continuing the existing on-site process using sulphuric acid and caustic soda, the facility was not tied to being sited close to the storage facilities, allowing the original water treatment plant to stay operational during construction.

The raw water feed is drawn from the municipal supply, a naturally soft water which originates from the Brendon Hills on the edge of Exmoor National Park. The guaranteed hourly production flow is 55m³, but should a higher flow be required the plant can be operated on RO bypass to achieve up to 80m³/hr. The system also has adequate in-built provision to cope without the need for electrical power in the unlikely event of a major failure, being able to provide a flow approaching
50m³/hr simply by routing the mains supply directly through the de-ionisation facility.

Given the importance of ultra pure water to the power station, the product specification is exacting, but in practice, product quality has routinely exceeded the levels set. Sodium, chloride and sulphate are consistently at 0.1 g/kg or less and the levels of silica and organic matter are very low.

Aspects of the new plant design also help to protect power station boilers. Benefiting from 100% ion-exchange condensate polishing, the boiler feed water chemistry has always been excellent – an important issue, given the potential corrosion problems, coupled with the inevitable access problems for maintenance of the reactor pressure vessel. The RO process helps exclude organic matter and silica normally present in the municipal water, which can prove detrimental within the boilers and steam circuit and cannot be easily removed by ion-exchange processes. This also lessens the likelihood of the anion resins within the CPP becoming fouled, extending resin life and maintaining system efficiency. A telemetry system and extensive monitoring ensure that plant operation is optimised.

By nature of the installation, the operating costs are largely independent of the quantity of demin produced. The power station owners pay a fixed monthly charge, coupled with the cost of exchanging the de-ionisation components and charges for consumables used in automatic regeneration of the softener. In the first year of operation, the direct savings made by outsourcing, coupled with a higher than expected RO efficiency have led to the actual costs being 12% lower than had been budgeted.

British Energy own and operate the Hinkley Point B nuclear power station; Ecolochem International own the water treatment plant and are responsible for operating and maintaining it, with a 24-hour-a-day, 365 days-a-year guaranteed response. Ecolochem staff are responsible for routine checks and minor maintenance during weekly site visits, with British Energy personnel making any necessary flow adjustments and routine surveillance.