Cryogenic air system supply to OR

Full secondary treatment for all flows

Phase I of the secondary treatment; WAS thickening; digester screening facilities.

Technical support facility and the modernization of the primary treatment 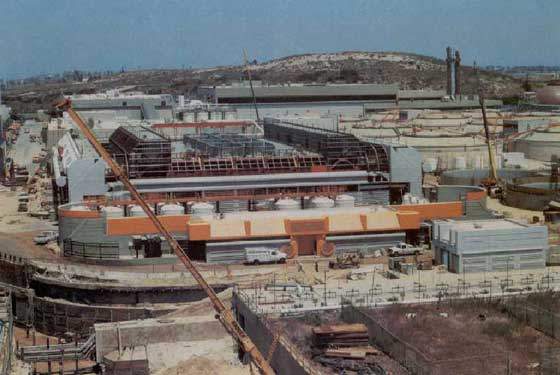 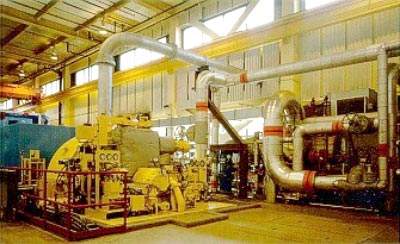 The plant's co-generation system. Rational energy usage has been a central part of the plant's operating policy from the start and energy recovery is an important aspect of this approach. 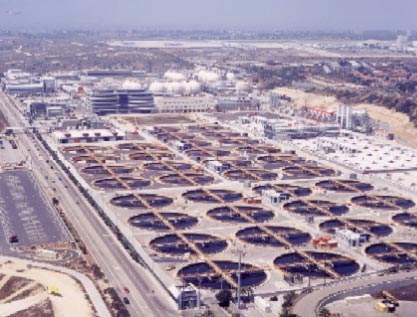 An aerial view of the Hyperion plant as it is today. 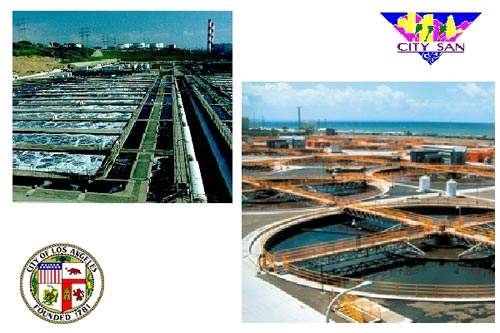 The plant's aeration basins and clarifiers. Retrofitting the basins with a more efficient air diffusion system has significantly increased the secondary treatment capacity.

A view of the site during the secondary treatment expansion of the Hyperion WWTP.

The ‘Hyperion Treatment Plant Sludge-Out to Full Secondary’ Project was selected as one of the Top Ten Public Works Projects of the 20th Century by the American Public Works Association (APWA), ranking it alongside the likes of the Panama Canal, the Hoover Dam and the Golden Gate Bridge. This honor, along with the Los Angeles Regional Water Quality Control Board’s first Water Quality Award to mark the plant’s transformation into a premier facility, came in recognition of a steady program of improvements spanning over 50 years of service.

In 1950, when the plant began operation and was receiving 1 million m³/day primary flow, it was the largest on the US west coast and one of the most modern treatment plants in the world. However, though technologically advanced in the 1950s, increasingly stringent environmental and public health regulations have driven a number of upgrades.

When the Hyperion WWTP first opened, it offered full secondary treatment processes and processed biosolids to yield a heat-dried fertilizer. However, shortly afterwards, the population of Los Angeles underwent a dramatic explosion and to keep up with the increased flows of wastewater, the levels of treatment were reduced to allow the facility to continue to operate using the available facilities. Seven years after it opened, the plant expanded to 1.6 million m³/day primary capacity and was discharging a blend of secondary and primary effluent through a five-mile ocean outfall. Soon after this, the biosolids-to-fertilizer program was stopped and the plant began to discharge its digested sludge into Santa Monica Bay through a separate seven-mile ocean outfall. This practice continued up to 1987, when a consent decree between the City and the Environmental Protection Agency (EPA) mandated its cessation. A second part of the decree, which had originally been made in 1980, required full secondary treatment by the end of 1998.

The $1.4 billion improvement project arose in response to these demands and replaced nearly all the original processing elements, while allowing the plant to continue to operate and meet all necessary permit requirements.

Phase I of the secondary treatment expansion began in 1991 and was completed in 1996. Costing in excess of $200 million, this extended secondary treatment to 800,000m³/day of wastewater and included the construction of oxygen reactors, final clarifiers, cryogenic facilities, disinfection and service water facilities and a 250,000m³/day pumping plant.

Starting in January 1996, phase II finalized the provision of full secondary treatment facilities and involved the construction of five oxygen reactors, five circular clarifier batteries comprising four tanks each, the expansion of the cryogenic facility and the installation of an integrated control system. This element cost $149 million.

Other phases of the overall project included the combination of the digester cleaning facility and sludge screening facility to produce a drier screened sludge, the construction of a sludge thickening plant, the provision of a technical support facility and the modernization of the primary treatment.

Wastewater arrives from an extensive system of sewers and passes through bar screens before entering the sedimentation tanks. The primary treatment is simple, utilizing a series of underground tanks with a retention time of around one hour. The flow is dosed with chemical coagulants to improve the efficiency of the settling process and oil and grease skimmed from the surface. The settled primary sludge is pumped to anaerobic digesters, while the flow is pumped to the secondary treatment phase.

Primary effluent is distributed to a series of aeration basins. As part of the project, they were retrofitted with a more efficient air diffusion system which coupled with the cryogenic air system, which provides a 96% pure oxygen feed to the oxygen reactors, has increased the secondary treatment capacity by 400,000m³/day.

After the activated sludge process, the flow enters secondary clarifying tanks where settling of the biomass occurs. The majority of the settled solids are returned to aeration basins while the excess waste activated sludge (WAS) is collected, thickened and pumped to digesters.

Around 6% of the secondary effluent is reclaimed for use as cooling water or chemical dilution in the treatment process or for irrigation purposes, the remainder being discharged to the ocean, five miles offshore at a depth of 190ft.

The excess primary and secondary sludges are thickened by means of 12 continuous feed, horizontal solid bowl centrifuges, each with a peak hydraulic loading of 227m³/h, before entering anaerobic digesters. This system, installed in 1993 at a cost of $68 million, enables greater amounts of sludge to be treated in the same digester volume, since it raises the input solids content from the previous 0.5% to 7%.

The methane-rich biogas produced during decomposition is collected and piped to a nearby power plant, which partially offsets the WWTP’s energy purchase costs. Rational energy usage has been a central part of the plant’s operating policy from the start and it was one of the first in the world to harness the energy potential of sludge treatment. In the 1980s, it was in the vanguard of Los Angeles’ developing industry of energy recovery from renewable resources, implementing an innovative drying and combustion system to maximize the energy available from sludge organics. This energy-efficient sludge dehydration produces a dry powder which is then used as fuel. The energy recovery process was further continued as part of the improvement program between 1992 and 1997, with the expansion of the digester capacity and start of the first phase of co-generation.

The final sludge produced at the plant is dewatered by centrifuge and consigned for beneficial land application.

In making their awards, APWA took a number of criteria into account, the main one being the significance of the project on the quality of life. Others included the improvements and advancement provided, how well the project addressed public needs and met the defined objectives, the degree of difficulty overcome, the level of innovation and the awareness and protection of the natural and social environment. Consideration was also given to projects which broke new ground or advanced professional and industrial standards.

The project had made a 95% reduction in the amount of wastewater solids entering Santa Monica Bay, improving the local marine habitat, particularly around the sludge outfall, and fostered co-operation between the City, public, regulatory agencies and government. All of these factors weighed heavily in favor of the project, which APWA described as one of the great environmental achievements of the 20th Century.

The plant is owned by the City of Los Angeles and operated by the Bureau of Sanitation. The principal regulators are the US Federal Environmental Protection Agency and the LA Regional Water Quality Control Board. The design engineering team was Daniel Mann Johnson & Mendenhall and Black & Veatch. Kiewit Pacific were responsible for Phase I of the secondary treatment, the WAS thickening and digester screening facilities. The phase II main contractor was the Tutor-Saliba-Perini-Scott Joint Venture. M.A. Mortenson were responsible for the technical support facility and the modernization of the primary treatment. Other contractors included Dillingham/Ray Wilson and Harris Contracting. American pipe provided ductile iron pipework and Murphys Industrial supplied coatings.