The city of Kampala; the Gaba III plant has been designed to help meet the needs of the Greater Kampala area to 2015.

The new Gaba III plant, which increases the overall capacity by 80,000m&sup3;/day, bringing the total daily output up to 200,000m&sup3; and meeting Greater Kampala’s needs to the year 2015. 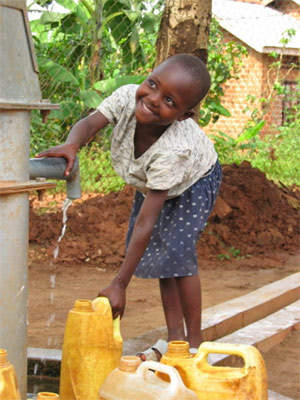 A young girl at the clear water well at the Mercy Home for Children, Kampala. Since 2005, NWSC have made great advances in supplying the underprivileged areas of Kampala, now serving about 85&#37; of the urban poor, who previously had to rely on untreated water from contaminated wells. 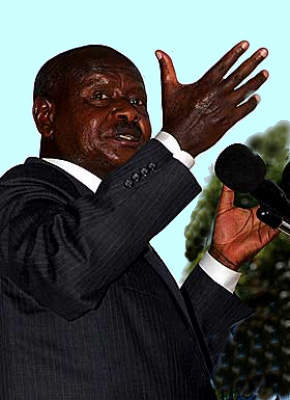 Ugandan President Yoweri Museveni formally commissioned the new Gaba III plant in April 2007. In his speech, he reaffirmed his commitment to providing safe water to the population and eradicating poverty throughout the country. 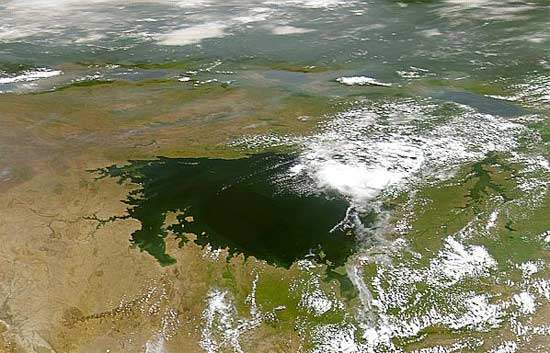 Satellite image of Lake Victoria; the raw water for the Gaba plants is drawn from Lake Victoria’s Murchison Bay. Water quality has been adversely affected by pollution and drought. 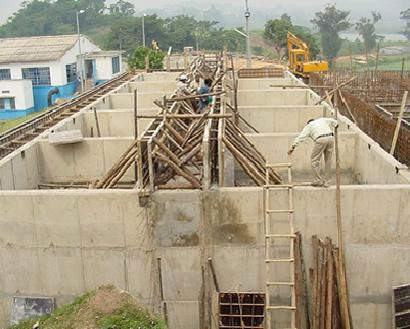 Work to refurbish the original Gaba plant took place in 2003 with EU funding. 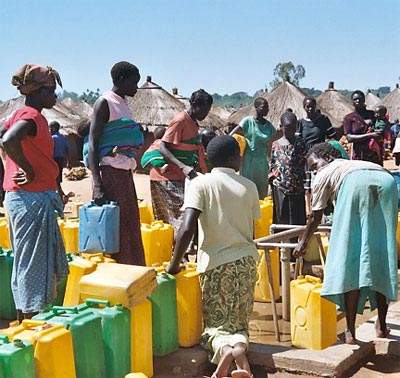 Women line up at a new bore hole at Labuje, Uganda. The Ugandan government is committed to the provision of sustainable water resources for the future – and universal access to a safe supply by 2015.

Eight years after the National Water Policy was formulated, with the commissioning in April 2007 of the Gaba III treatment plant – part of an ongoing improvement scheme – Uganda took a major step towards its stated goal of ensuring sustainable water resources for the future. Designed to complement the two pre-existing plants at Gaba, the new facility increased the capacity by 80,000m³/day, bringing the total daily output up to 200,000m³ – meeting the needs of the area up to 2015.

Although the effects were felt immediately in many areas of Greater Kampala, the construction of new large diameter mains in 2009 enabled the more distant parts to gain the full benefits.

In addition to the plant itself, the work included the construction of the necessary transmission mains, pumping stations, a sludge treatment system, buildings and site infrastructure.

At €16m, the Gaba III plant accounted for over half the total project budget of around €25m.

The first Gaba water treatment plant was built in 1928 and Gaba II was constructed in 1992 with financial assistance from the EU. The European Commission also funded urgent repairs to the original plant ten years later.

The first phase of the Gaba I refurbishment, which was completed in 2003, resulted in bringing pump capacity back up to 74,000m³/day, with €2.4m of additional financing being made available in July of the same year to reinstate the plant’s full treatment
capacity.

The raw water for treatment at the Gaba site is drawn from Lake Victoria’s Murchison Bay. Heavy pollution in this area has taken a significant toll on water quality – a problem further exacerbated by a period of drought, which led to receding levels in the lake, leaving the intakes collecting progressively dirtier water.

With an increased customer base – up by 60% in only two years – parts of the Kampala Water Service Area experienced exceptionally high demand. This led to water shortages in many areas, including Bweyogerere, Namugongo, Mukono, Kanyanya and Mpererwe, along with parts of Kasangati and Gayaza.

“Since Gaba I and II have been severely overstretched by the increased demands, the water supplied has contained quantities of algae and suspended matter at times.”

In addition, since Gaba I and II were severely overstretched by the increased demands, the water supplied contained quantities of algae and suspended matter at times.

In 1999, the Ugandan government formulated a National Water Policy (NWP) to bring “integrated and sustainable management, development and use of water resources in Uganda for present and future generations”.

Something in the region of 20% of Uganda’s urban dwellers do not have access to safe water and around half a million of them live in Kampala.

With adequate, quality water recognised as an essential component of both socio-economic development and the eradication of poverty – one of the President Yoweri Museveni’s election pledges – the issue of Kampala’s water supply was a matter of great priority.

Phase I: the Gaba plant

Treatment at the plant involves a first stage of physical separation, consisting of coagulation and flocculation chambers together with clarifiers equipped with lamella inserts. Subsequently, a rapid sand filtration stage provides a second mechanical treatment, before the water enters the chlorine contactor/storage tank.

An associated treated water pumping station supplies water to the reservoirs at Muyenga and Nakasero, and contains the filter back wash blowers and the pumps for the chlorination system.

In addition to constructing these facilities, an intake and associated low lift pump station with a capacity of 92,000m³/day were built, along with pipe work to connect them to the Gaba II raw water abstraction pipe and a further delivery pipe to the treatment plant itself.

This part of the project also called for the provision of a sludge treatment system including sludge drying beds, a filter backwash water recycling system, transformer and switch gear, surge controllers for the pumping stations, staff housing and associated plant infrastructure.

The transmission mains required pipelines to be laid from the new plant to carry 50,000m³/day the 11km to the Gunhill reservoirs and 6.5km to the Muyenga reservoirs conveying 90,000m³/day. A third line then carries a daily 29,000m³/ of water over 5km from Muyenga to the Rubaga reservoir. These pre-existing reservoirs were also rehabilitated as part of this work.

The Gaba III was completed in November 2006 and provides an additional water supply of 80,000m³/day for not only Kampala but also to Mukono, Kajjansi, Nansana, Matuga and Buloba. The completion of the Gaba III project was complemented by the construction of the transmission mains from Gaba to Muyenga, Gunhill and Rubaga Reservoirs.

Small diameter pipes and the lack of service reservoir tanks form the main limitations on the distribution system, particularly in getting water to the further parts of Greater Kampala.

“The issue of Kampala’s water supply was a matter of great priority. Gaba III and the Kampala water supply and sanitation expansion programme arose in response.”

To address this problem, the National Water & Sewage Corporation (NWSC) took up construction of larger bore pipelines, beginning with Mukono and parts of eastern Kampala.

In June 2007, work began on two large capacity reservoirs, pumping stations and a 500mm diameter distribution main to bring water from Mutungo via Kireka, Bweyogerere and Namanve. The project was completed in 2009.

The NWSC is also installing an offshore pipeline at a distance of 1.5km into Lake Victoria and at a depth of 11m, to enable the treatment plants to draw quality raw water. This will help to overcome many of the ongoing problems of algae and contamination.

The contract for this project was signed in March 2009. Earthworks, water quality analysis and route survey are currently being carried out.

Kampala Water and the NWSC are the project sponsors, with Dywidag International as the main contractor on the Gaba III plant and GkW as design consultants, in association with Aqua.

Spencon and Sogea-Satom were responsible for elements of the plant and the construction of the transmission mains with HP Gauff as design consultants on this element of the work. Funding was provided by the German Government through the Kreditanstalt fur Wiederaufbau and the Government of Uganda.