Connection into the C5

Preparation of the Sand Filters

New Valves and Pipework Installed on the M5 Main 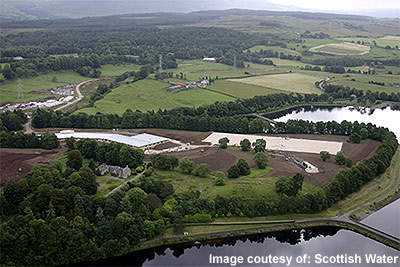 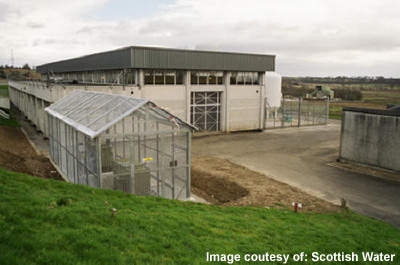 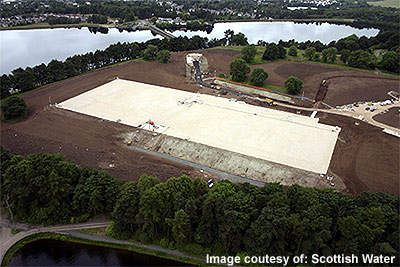 The Balmore pump house underwent significant modification during the project. 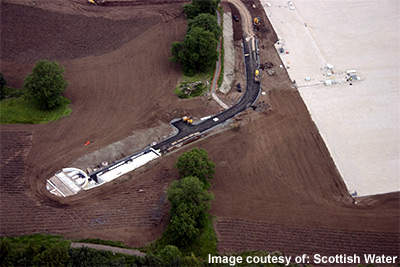 The new clearwater tank – the first compartment of the service reservoir was tested in September 2005. 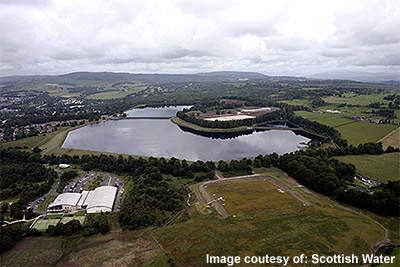 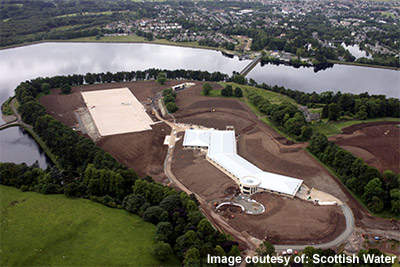 Bankell service reservoir with the other reservoirs in the background. 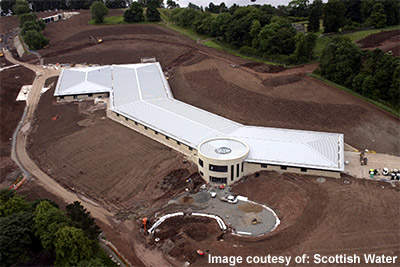 The new water treatment works and clearwater tank with reservoirs in the background. 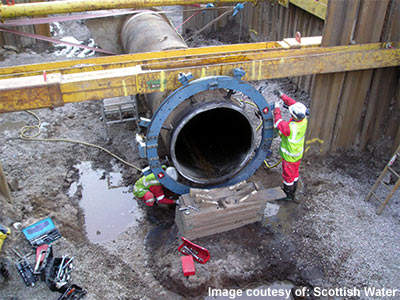 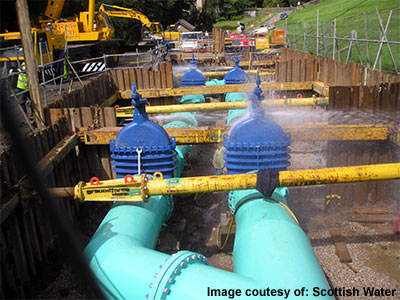 Installing the pressure reducing valve on the M5 main. 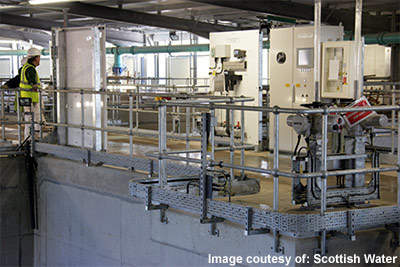 Work to complete the M5 valve chamber will continue during September 2007.

MJ Gleeson – subsequently acquired in 2006 by Black and Veatch – was the main contractor for the project, which comprised several linked elements across the Strathblane, Milngavie and Balmore area. In addition to the construction of the new WTP itself, the project also called for the modification of the existing pumping station at the adjacent Balmore plant, together with the provision of an additional 160,000m³ treated water storage capacity.

The £120m project was the largest single water treatment scheme in Scottish Water’s £1.8bn round of investment for 2003 to 2006 and provides Greater Glasgow with a state-of-the-art supply. The entire project was completed two months ahead of schedule and £10m under budget.

The Katrine Water Project won the 2007 Utility Industry Achievement Award for capital project management. The project also won the 2009 Edmund Hambly medal from the Institution of Civil Engineers (ICE) in the category of creatively designed engineering projects for making a substantial contribution to sustainable development.

The use of Loch Katrine to supply Glasgow has its origins in Victorian times. In the early part of the 19th century, a mere 30 public wells – and a handful of private ones – provided the city’s only sources of water. In 1848, after a second outbreak of cholera again decimated the poorest inhabitants, moves began to bring the water supply under municipal control in an attempt to overcome the growing public health problem.

The resulting supply system took three and half years to complete and involved the construction of a dam on the loch, 26 miles of aqueduct, a similar length of trunk mains, 46 miles of distribution pipes and the Mugdock storage reservoir at Milngavie. Queen Victoria herself officially opened the scheme – seen as the engineering marvel of its day – on 14 October 1859.

Over 140 years later, changes to European and UK water quality standards, particularly in respect of disinfectant by-products and micro-organisms such as Cryptosporidia, formed the main driver behind the project.

In November 2001, a planning application was submitted to East Dunbartonshire Council for the construction of a treatment facility at Barrachan and an associated service reservoir at Bankell Farm. Amid concerns that the scale of the proposed development would reduce amenity of existing reservoirs, the application was refused in August 2002. In the same month, the detection of cryptosporidium in the Mugdock reservoir led to some 140,000 Glaswegians being advised to boil tap water intended for drinking, food preparation, teeth cleaning and bathing infants.

Scottish Water appealed to the Scottish Executive in October 2002 and a revised planning application addressing the concerns that had been raised was submitted the following month. In February 2003, planning permission was granted and, on 22 March 2004, construction began on the main works at Milngavie.

The most suitable treatment process for the new plant was selected after a comprehensive appraisal of the available options, the treatment parameters required and the results of the earlier on-site trial. Running for a year, the £1m pilot plant drew water from the Craigmaddie Reservoir, which was then split into three process streams – rapid gravity filtration, dissolved air flotation / rapid gravity filtration and immersed membrane filtration.

In addition, two plumbosolvency test rigs were used to investigate the best approach to control lead within the distribution system. After independent assessment of process suitability, coagulation and filtration was selected as the most appropriate for the Katrine Water Project.

The direct filtration process at the new plant has two distinct phases – conditioning and filtration.

The water is first dosed with lime to achieve a stable pH and provide optimum conditions for the aluminium sulphate coagulant, thus maximising flocculation; filter performance is enhanced by the subsequent addition of a polyelectrolyte. Coagulated water passes to mechanically mixed flocculation tanks before flowing under gravity to the plant’s filtration columns.

Using anthracite / sand dual-media, the size, configuration and flow rate of the deep filters installed were designed using data arising from the pilot project, incorporating a higher loading than previous full-scale operations based on the latest understanding of the process. Periodic upflow backwashes maintain the filter columns’ operational efficiency.

Sodium hypochlorite is then added to disinfect the filtrate, which is subsequently further conditioned by the addition of lime to adjust the pH, with a final dosing of orthophosphoric acid to stop any residual lead remaining in the old network dissolving and entering the supply.

A new 80 million litre clear-water tank was constructed for the storage of clear water at Barrachan together with a 240 million litre a day raw water pumping station. This storage tank mainly supplies to the residents of centre and west Glasgow, which are little elevated than other places.

The Strathblane Cross Connection, which was completed in 2002 at an additional cost of £1.9m, allows raw water from the Katrine Aqueduct to be transferred to the Lomond Aqueduct – a pre-existing cross-connection already permitting flow in the opposite direction.

The result is the full utilisation of the existing water treatment capacity at the Balmore WTW and therefore, the gravity-fed Katrine water replaces some of the Loch Lomond supply, which needs to be pumped over 50m in elevation to Balmore WTW. A pilot plant has also been constructed to efficiently treat the mix of these different waters. The plant operates non-stop to optimise the treatment process for Loch Lomond and Loch Katrine water.

Adding £5m to the overall budget, the second element of the project – the Balmore to C5 main – provides water to around 140,000 customers in the East of Glasgow, a new supply which was itself made possible as a result of the Strathblane Cross Connection.

“The direct filtration process at the new plant has two distinct phases.”

The draw down of the Craigmaddie reservoir – reducing the level by around 10m – was also necessary to enable essential work to be carried out safely. The reservoir was out of service from 21st July 2006, during which time Glasgow received water from Mugdock reservoir – which had itself been drawn down during earlier work on the project in 2005 – and the Milngavie service reservoir at Bankell. Craigmaddie was refilled in April 2007 and then reintroduced into supply after a period of settling at the end of May.

New valves and pipe work have also been installed on the M5 Main, adjacent to the main works entrance, with work continuing to construct the new valve chamber and complete installation during September. Final landscaping to the site was completed in spring 2008.

The site is a popular recreational area and falls within a sensitive green belt area. The plant has been partially sunk into the ground while the open exposed areas have been given a natural stone finish and the service reservoir has a grass roof to minimise the visual and landscape impacts of the project. Lamella clarifiers were used to achieve a smaller footprint instead of cone sludge settlement tanks.

The sludge system was moved into the sewer system on the other side of the site, which prevented developing a separate on-site sludge treatment plant. The filter gallery pipe work was from the middle of the facility to the outside wall reducing the footprint of the waterworks.

Acquired by Black and Veatch in 2006, Gleeson was appointed main contractor by Scottish Water. A-Plant Acrow was the sole supplier of formwork / falsework systems and supplied a number of the brackets and forming systems used under agreement with MEVA.

Thames Water provided the pilot plant equipment and the process assessment was done by the Water Research Centre.