Memcor (a division of the Veolia Environment group)

The new Kwinana Water Reclamation Plant is the largest of its kind in Australia and uses combined microfiltration and reverse osmosis technology to supply high quality water to local industry.

Kwinana takes treated effluent from the existing nearby Woodman Point wastewater treatment plant for further processing. The flow of treated industrial wastewater into Cockburn Sound will fall by some 6 million L/d as a result. 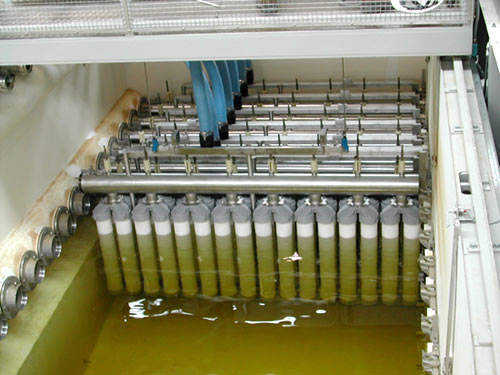 Memcor CMF-S submerged continuous microfiltration cells are integral to the system. The racks hold the membrane bundles in direct contact with the feedwater. 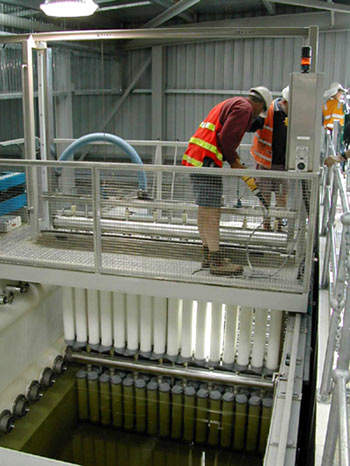 Membrane elements being installed. The Kwinana plant benefits from the major developments which have been made in microfiltration / RO dual membrane approaches for water reclamation over recent years.

Diagram of the Memcor CMF-S system. Microfiltration provides a consistent, high quality feed to the RO membranes, which significantly extends their operating life.

The Kwinana area is Western Australia's main centre of heavy industry and a major user of Perth's water. The new plant arose as a result of a major study to investigate the potential for sustainable water management in the region.

Highly commended in the 2005 Global Water Awards, the Kwinana water reclamation plant, the largest of its kind in Australia, supplies high quality water and reduces effluent discharge into the Cockburn
Sound. The plant forms part of the State Government’s strategic drive to achieve 20% reuse of treated wastewater by 2012.

Owned and operated by the Water Corporation of Western Australia, Kwinana was built by a Veolia Water Systems Australia / John Holland joint venture and is designed to treat a final total of 5GL of water annually, using combined microfiltration and
reverse osmosis.

The A$28.5m project won the 2005 Environmental Merit Award from the State branch of the Australian Water Association.

The 20% reuse target established by the West Australian Government’s State Water Strategy came in the light of both repeated droughts in the region and wider awareness of global climate change, in an effort to ensure sustainable supplies.

Many parts of rural Western Australia have been successfully recycling water for some time, with slightly over 40% of the region’s treated wastewater being reused to irrigate amenities, parks and gardens. However, in Perth, the figure was around 3%.

“The A$28.5m project won the 2005 Environmental Merit Award from the State branch of the Australian Water Association.”

The project was intended to reduce the volume of potable water supplied to industry by replacing an expected 6GL a year – about 2% of Perth’s total unrestricted water use – with high quality industrial grade water. In a second component of the scheme, treated industrial wastewater will be accepted for subsequent offshore disposal.

In addition to the direct conservation of resources, there are further immediate environmental benefits for the region. The flow of treated industrial wastewater into the Cockburn Sound is expected to fall by some six million L/d.

The plant is sited at BP’s refinery complex; BP is one of a number of large key industrial customers to receive the reclaimed water.

Kwinana accepts the secondary effluent from the existing nearby Woodman Point wastewater treatment plant, further processing it by means of sequential dual-membrane technologies to a quality suitable for industrial re-use. Treated wastewater from
Woodman Point is pumped into an on-site contact tank through a 2mm-diameter screen. To aid in the minimisation of biological fouling of the microfiltration and Reverse Osmosis (RO) membranes, the feedwater is dosed with sodium hypochlorite and small
volumes of sulphuric acid are also subsequently added to reduce the inflow pH slightly. This is largely to create more favourable conditions downstream for the RO step.

The water then flows under gravity to four Memcor CMF-S submerged continuous microfiltration cells, which filter the input down to a particle size of 0.2 microns on a continuous basis. The microfiltration step concentrates rejected particulates for
disposal and provides a consistent, high quality feed to the RO membranes, extending their operating life and significantly reducing the system’s replacement and maintenance requirement.

The system consists of four filtration cells, each of which houses 288 membrane modules. The addition of further modules within these cells has enabled the installation to expand to 16,700m³/d and more cells are planned to meet the plant’s future final capacity.

“The plant is sited at BP’s refinery complex.”

The membrane modules are mounted in racks – each rack containing 36 modules which hold the membrane bundles in direct contact with the feedwater. A partial vacuum established by an associated filtration pump then draws this water through the walls of
the hollow membrane fibres. The derived filtrate is combined in a common header and travels to the RO feeder tank.

The RO treatment train involves a two-stage process. In the first stage, the inflow is pumped along the tubes and across the membrane surface at high pressure. During this phase, around 55% of the inflow is recovered as permeate. The second stage is
smaller and accepts the concentrated waste stream from the preceding stage, enabling a further 25% to be recovered, leading to an 80% recovery rate overall.

The permeate arising from each RO train is collected in a single header. The combined product is then pumped to a degassing tower, where air-upflow strips the CO2 from the permeate. Subsequently, the degassed water is chlorinated and stored prior to
distribution.

The success of the plant is dependent on the ongoing efficiency of the membrane systems installed, an issue which has been addressed in both the design and the operational regime adopted. From the outset, both the microfiltration and reverse osmosis systems were designed with sufficient in-built spare capacity to permit full treatment to be achieved with one unit off-line.

However, particulate build up on the membrane surface and bio-fouling pose on-going operational challenges. Dosing the feedwater with sodium hypochlorite does reduce biological accretion but particles still tend to build up on the surfaces of the microfiltration membranes, adversely affecting the driving pressure and, consequently, the flow-rate.

Air forced around the membrane walls during the backwash cycle helps to dislodge particles. In addition, a fortnightly, three-hour, automated Clean In Place (CIP) process uses a re-circulated heated weak acid or caustic / detergent solution to wash
the membranes.

In the RO train, the concentration of dissolved salts inevitably increases over time. To prevent the supersaturated salts developed from precipitating out onto the surface of the membranes, chemical anti-scalant is routinely used at Kwinana.