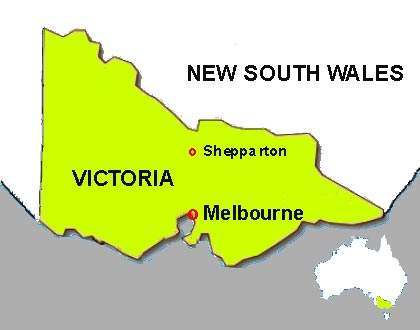 Map of Victoria and south east Australia. Shepparton lies to the north, in a region where the predominant industries are fruit, vegetable, beef and dairy processing. These particular demands have had a significant influence on the improvement scheme. 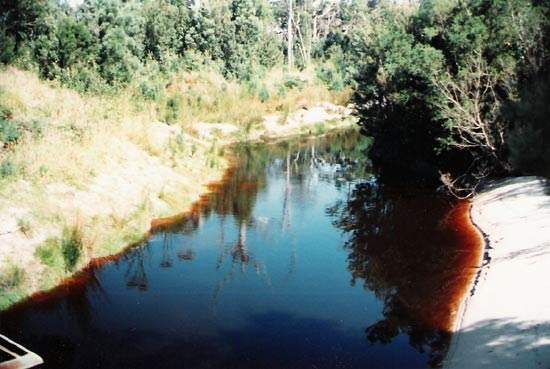 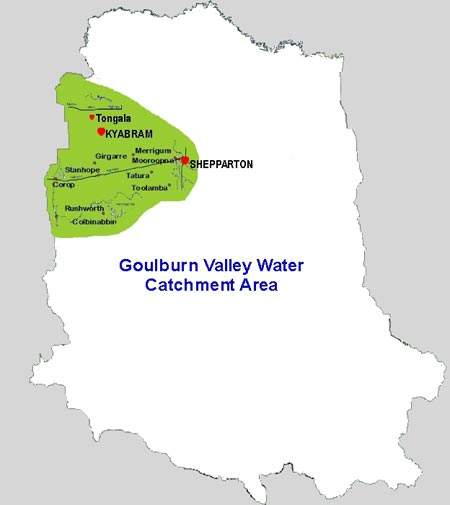 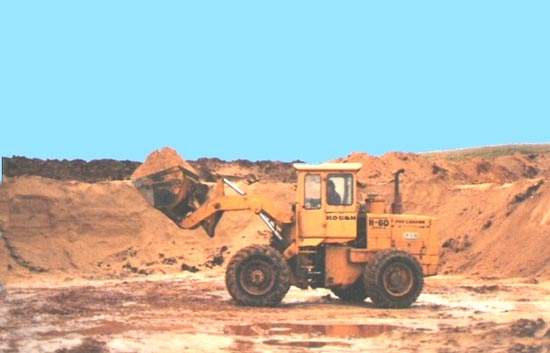 Aerial photograph of the HRAL in construction. The construction of this 200,000m&#179; lagoon, with its 5ha footprint, is the largest project ever undertaken by GVW and attracted funding from the Australian Government and local industry. 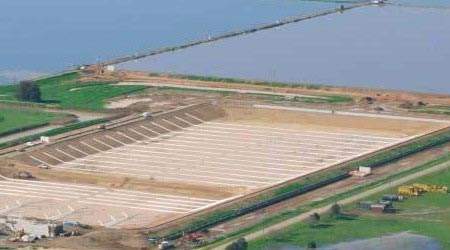 The HRAL will allow the effluents from local food processing industries to be treated in an affordable and environmentally sustainable way. The water reclaimed will be used to irrigate 230ha of pasture during the summer.

In addition to the work at Shepparton and Kyabram, the improvement scheme in the western zone of GVW’s Central District involved a number of other projects. These included upgrades to the raw water treatment and storage facilities at Tongala, improvements to both the WTP and WWTP at Rushworth, sewerage extension projects at Stanhope and Merrigum and a general expansion of wastewater treatment capacity.

The total cost of the scheme was around A$40m and a further A$95m was expected to be spent on the whole regional project, spread over the five-year period up to 2008.

The Australian water sector has seen many changes over recent years, with the wider adoption of corporate management principles, the introduction of competitive operating licences and customer contracts, on top of increasingly stringent environmental legislation. For GVW, in a region dominated by the processing of fruit, vegetables, beef and dairy products, this has meant improving the quality of supply water to both these industries and its urban customers at a competitive price, while meeting the area’s need for environmentally sustainable wastewater management.

“The Australian water sector has seen many changes over recent years.”

Australian waterways are very sensitive to pollution, making the use of advanced approaches to wastewater treatment and re-use particularly important, a factor borne in mind throughout the design of the improvement scheme.

To comply with the new regulations, reclaimed water is now principally destined for irrigation rather than discharge into streams.

While this circumvents one potential environmental impact, it makes effective treatment systems essential to avoid harming the local groundwater, which already has a history of damage from human intervention.

In 1994, samples were taken from 27 bores in the Tongala-Kyabram area and analysed for physical parameters, chemical constituents including heavy metals and trace elements, environmental isotopes, nutrients, microbial loadings and pesticides.

The results suggested that the quality of the shallow groundwaters in the area studied had been adversely affected, directly or indirectly, by human activity, with all but one of the samples exceeding Australian Drinking Water Health Guidelines for at least one parameter. Pesticides were detected in 22% (six) groundwater samples; Faecal Indicator Bacteria (FIB) also occurred at the same rate. Only 15% (four) of the bores supplied water that would be considered suitable for irrigation purposes, though 44% provided groundwater which met the guidelines for livestock watering.

A number of recommendations arose from this groundwater quality assessment including the preparation of vulnerability and risk maps, the identification of contaminant sources and a review of water management; two years later, the water improvement scheme was underway.

There were two parts to the improvement works undertaken at Kyabram – the replacement of the water treatment plant and the upgrade of the town’s wastewater treatment facility.

The A$3.3m contract for the design and construction of the 15,000m³/day WTP and associated 6,000m³ treated water storage was awarded to Aquaclear Technology. Their design used Dissolved Air Flotation Filtration (DAFF) and a plant layout which maximised the use of the existing infrastructure.

Construction began in April 1997 and the plant was officially opened on 20 May 1998 on time and within budget.

“The reclaimed water is used to irrigate 230ha of pasture during the summer.”

In the winter, reclaimed water from the Kyabram WWTP had normally been discharged to the adjacent Coram Drain, which outfalls into the Goulburn River. Upgrading the plant to avoid disposal to the waterway required increasing the winter storage capacity to 224,000m³, the refurbishment of an existing treatment lagoon, inlet improvement works, rehabilitating the pumping station and the development of a new irrigation system.

Further improvement works on the water mains in Union and Edis Streets Kyabram were started in May 2010. Under the project, nearly 700m of aging water main will be replaced. The replacement is expected to improve water supply reliability, pressure and flow rates, and will minimise issues of water quality. The project is being carried out by Infratec International and is expected to cost $275,000.

The work at Shepparton had three main elements. Firstly, like Kyabram, the town required a replacement WTP; secondly, a modern tertiary treatment stage was constructed at Shepparton wastewater facility; finally the WWTP was upgraded with the addition of a high rate anaerobic digestion system.

The original water treatment plant had been in service for over 60 years. Its limited capacity and the difficulties involved in modifying it to meet modern Environment Protection Authority guidelines made its decommissioning and replacement inevitable.

The new 40,000m³/day plant was designed to meet projected demands through to the year 2012, with the ability to be easily expanded in the future, as required. The DAFF process was again selected, since it was judged to be the best suited to the nature of the raw water supply and able to ensure a safe and reliable supply in the event of an algal bloom. The project was completed under budget at a cost of A$4.2m and was officially opened by the Deputy Premier, Pat McNamara, on 11 March 1998.

The Shepparton Wastewater Management Facility is GVW’s largest WWTP, the industrial effluents it receives contributing to an equivalent load of some 700,000 people. Most of the reclaimed water is used for irrigation, but the size of the plant necessitates some discharge to the Goulburn River.

OTV Kruger were awarded an A$3.8m contract to construct a state-of-the-art Actiflo process plant – the first of its kind in Australia – to remove phosphorous and algae from treated wastewater prior to its discharge.

Designed to remove 20t of phosphorus, 60t of nitrogen and 600t of suspended solids each year, this process significantly reduces the annual nutrient load on the receiving waters.

This project was completed in October 2002.

The final part of the work at Shepparton involved the construction of a 200,000m³ High Rate Anaerobic Lagoon (HRAL), the largest project ever undertaken by GVW. This included the construction of the new lagoon itself which, after completion, was sealed with a 5ha polypropylene cover, gas collection and flaring equipment, lagoon aeration facilities and extensive interconnecting pipelines.

The biogas produced by the Anaerobic Digestion (AD) process is being used for power generation. In 2005, Diamond Energy entered into an agreement GVW to purchase the methane gas produced at the Tatura, Shepparton and Mooroopna HRAL. The first biogas driven electricity generation plant was commissioned in 2007.

The project has clearly been of great benefit to Shepparton since it allows the large effluent discharge from local industry to be processed at the plant economically and in a more environmentally sustainable manner.

The work commenced in November 2002 and was scheduled for completion by December 2003, ahead of the peak fruit processing period. However, wet weather delayed the installation of the lagoon’s huge cover until the end of March 2004. The plant became fully operational in the second quarter of 2004.

“Under the project, nearly 700m of aging water main will be replaced.”

Latest water supply upgrade works on the water main in Shepparton were started in August 2010. The improvement works will replace nearly 800m of ageing water pipe. Work to replace water main was started at the intersection of Macintosh Street and Weddell Street. Project worth $170,000 is being undertaken by Infratec International and is expected to be completed in late October 2010.

Goulburn Valley Water own and operate the plants and were partly responsible for funding the improvement programme. The State of Victoria provided around 40% of the funding, with other contributions for various elements of the scheme coming from the Australian Government, the National Heritage Trust and local industry.

Aquaclear was the main contractor for the Kyabram WTP with a separate contract for upgrades to the storage and inlet works being awarded to R.Collie Contracting. Aqua-Tec Fluid Systems worked on the Kyabram WWTP improvement phase. OTV Kruger were responsible for installing the Actiflo tertiary treatment plant at Shepperton WWTP. Tenix Alliance are the main design and construction contractors for the Shepperton HRAL. Other contractors involved in the regional improvement scheme include McClure Earthmoving and Contract Control.