Discharge to the Lumwana East River 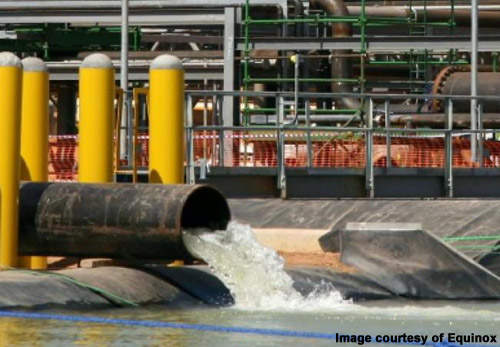 During commissioning, pumping tests to fill the process and raw water pond met the design rates of 500m&sup3; per hour per pump station. 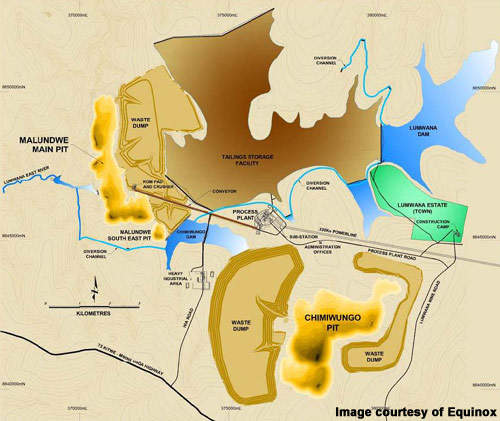 Plan of the Lumwana development, showing the main elements of the water management project. 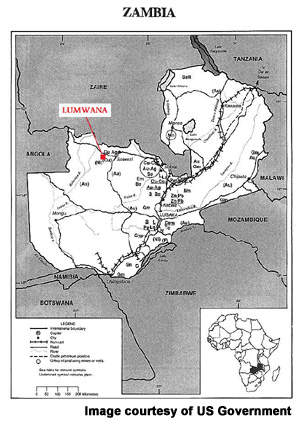 Location of Lumwana on the minerals map of Zambia.

The Lumwana mine, located 65km west of Solwezi, will be the largest copper mine in Zambia – said to be the largest in Africa – by the end of 2008. With one of the most ambitious and complex project financings on the continent – at about $1bn, the mine required a full environmental impact study approved by the Zambian Government, with water resource protection forming a major element in the scheme.

To meet the demands of safeguarding water, eliminating pollution and minimising the adverse environmental impacts of the mining operation, a comprehensive water management strategy was developed. This called for construction of Tailings Storage Facility (TSF) and a Water Storage Facility (WSF), which will provide process water as well as supplying the needs of construction and dust control.

“The mine required a full environmental impact study approved by the Zambian Government.”

In addition, the scope of the work includes a raw water extraction system and a series of diversion channels and spillways to ensure the health of the region’s natural watercourses.

The total cost of the water management project is estimated at more than $62m, of which $18.7m is pre-production and $43.9m deferred costs. The eventual rehabilitation cost for the tailings dam is expected to amount to some $5.3m.

Lumwana was discovered in 1961 but no serious work was to be undertaken for more than thirty years until the present owners, Equinox, became involved – initially as a joint venture with Phelps Dodge Corp, before ultimately buying them out. The mining licence – valid for 25 years from January 2004 – covers more than 1,300km3 and includes Malundwe and Chimiwungo – two major copper deposits, along with a number of exploration prospects.

The project’s comprehensive water management plan was developed to meet the environmental protection requirements for the main regional watercourses – the Lumwana East River and its major tributaries, the Malundwe Stream and Chimiwungo Stream.

Work on the tailings and water dam began in the fourth quarter of 2005, slightly ahead of the main mine construction, and the raw water extraction system was commissioned in early May 2008, achieving the design specification of a filling rate of 500m3 per hour per pump station.

“The mine’s TSF is a purpose-built facility.”

The mine’s TSF is a purpose-built facility, located downstream of the WSF and upstream of the Malundwe South pit. Recycled water from the TSF, together with raw water from the WSF, will provide a supply for the mine’s operational purposes, including processing, construction and dust control.

The WSF – which will have a capacity of 12 GL from Year 1, ultimately rising to 569 GL from Year 6 onwards – is also intended to supply potable water to the mine’s self-contained township for mine workers and their families, with ample storage provision at all stages.

For the first 12 years of operation, the TSF is designed not to need to discharge water and, during this initial period, water quality monitoring will be implemented to ensure that appropriate requirements can be met, or alternative strategies for reducing excess put in place. The project is expected to deliver about 70% of the process water used over the anticipated 37-year operational lifetime of the mine.

The scheme includes the construction of diversion channels to receive the WSF overflow and the off-take from the Chimiwungo dam, diverting the flow past the TSF and the Malundwe pit and returning it to the Lumwana River. These catchment diversion works have been specifically designed to accommodate predicted 100-year flood events and channel them safely back to the water-course downstream of the site.

These diversion works have been formed to take account of the geotechnical conditions and the differing flow rates required, with the upstream reaches being shallow, about 35m wide and relatively slightly sloped – about 0.%. The downstream sections, by contrast, are cut to the weathered rock level – some 15m deep – with a base of about 10m in width, and a slope of 0.2%.

In addition, a number of diversion dams are built along the channels, intended to allow cross-drainage. Emergency spillways have also been included to address the potential for flooding, effectively channelling any flood water into the TSF or alternatively into the Malundwe South pit at the Chimiwungo dam.

The design also features a low-lying sacrificial area within the mine floor to contain flood levels behind a cofferdam, with associated level monitoring equipment installed to ensure operational safety.

Equinox Minerals is the mine licence owner, with Knight Piésold being responsible for the dam and water management scheme. GRD Minproc was appointed as the mine front end engineering contractor, with Ausenco International/Bateman Minerals and Metals of South Africa JV acting as mine EPC contractor.