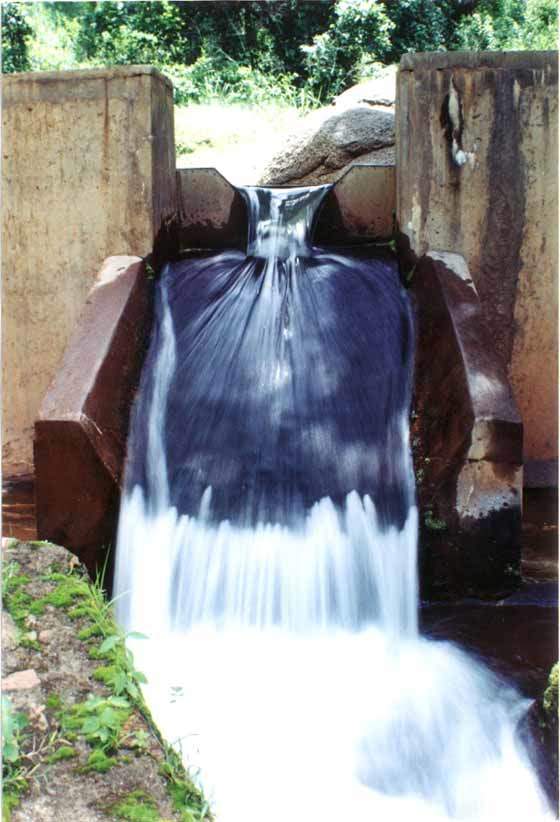 Former sources of supply for the Malawi water system were mountain streams, lakes and rivers. As a result, there were problems with siltation and turbidity associated with the fine sandy deposits within the water sources. 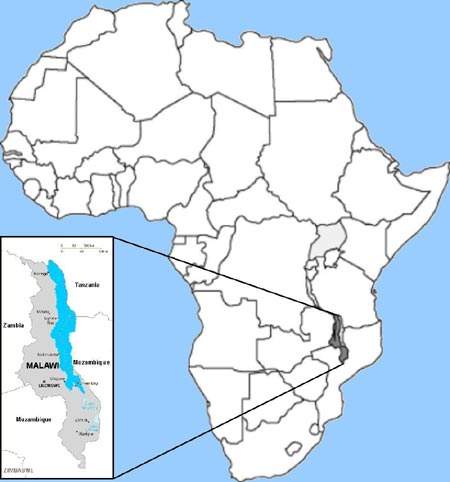 A landlocked country in southern Africa, Malawi has a long history of water borne infections. More than 20% of its total area is covered by fresh water. 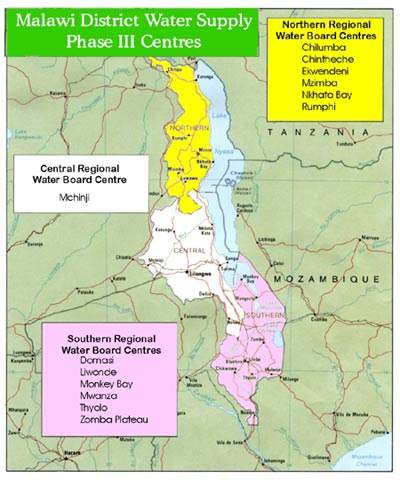 The water supply project is a country-wide scheme, involving all of Malawi's regional water boards. The Central region has one centre, the Southern and Northern regions each have six. 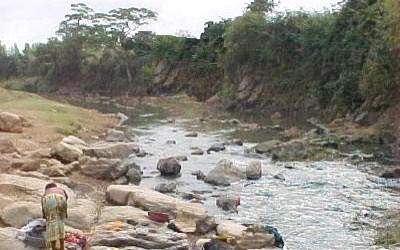 A tributary of Malawi's Bua river. The use of natural waterways for a wide range of purposes can often contribute to poor public health. 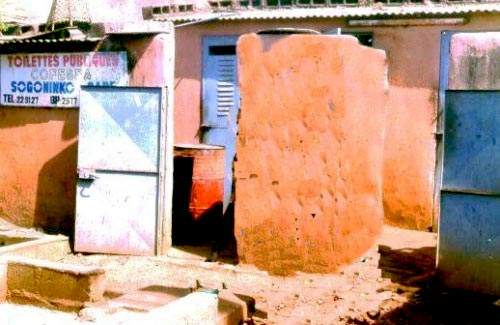 Malawian public toilets. The project included a drive to improve sanitation on a local basis, since the use of unprotected pit latrines is widespread. 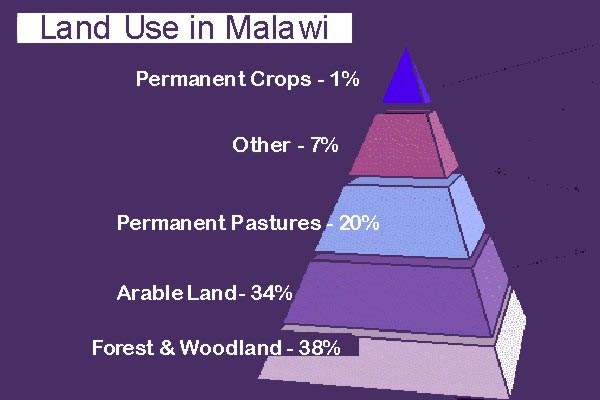 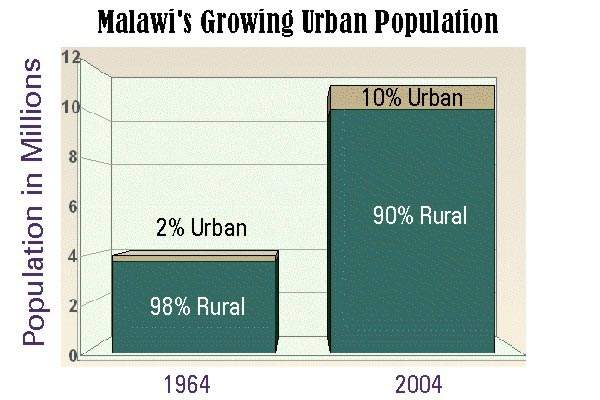 Comparison of rural and urban populations in 1964 and today. The DWS III project is part of Malawi's national water services development master plan, drawn up to meet the needs of a growing population and increasing urbanisation.

Stantec Consulting International was awarded the design review, tendering, supervision and construction contracts for the $17.5m scheme in March 2000. It completed the construction supervision consultancy for the project in October 2003.

The final elements of the project were completed by June 2004. The main part of the work involved improving access to clean drinking water, principally by the provision of additional connections and public standpipes at a number of local centres spread throughout the country.

DWS III was jointly funded by the African Development Bank (ADB) and the Government of Malawi. The ADB made the largest contribution, covering 84% of the cost as an African development fund (ADF) loan in December 1997, which drew to a close in December 2003, with the government making up the remaining requirement.

The project was intended to provide an adequate water supply to meet the demands of a growing population and increasing urbanisation, while also improving the reliability, efficiency and coverage of existing schemes in the process. Implemented in 13 centres across the country, the DWS III development ultimately provides for nearly a quarter of a million people.

In addition to upgrading the water supply provision in these district centres, the scheme also covered continuing work supervision, technical assistance and financial control at the local level, to ensure long-term viability. Elements of the project also addressed a number of major sanitation and health education issues.

Background to the need for Malawi’s DWS

"DWS III was jointly funded by the African Development Bank (ADB) and the Government of Malawi."

In past years, water borne infections had risen to rank alongside malaria and HIV/AIDS as leading causes of death in the country, leading to the government undertaking an initial water services review in 1993, which was funded by the ADB.

This was followed by the formulation of the national master plan in the following year and a programme of work began to provide good quality drinking water to the villages, which had been thought to be the best measure to deal with the situation.

However, despite a number of boreholes drilled in the various communities, diarrhoea and other related diseases remained a major threat to public health.

In 1996, the diarrhoea epidemic in the Thyolo District of southern Malawi forced the issue back into centre-stage and the government initiated DWS III to provide a lasting solution to the problem.

Phase III was specifically designed to meet the objectives established for water supply and quality with minimal additional land use or environmental impacts.

To achieve this, and also safeguard the long-term future of the development, the schemes were deliberately kept simple.

This also made for an easy hand over to the local water point committees which were set up to assume responsibility for the ongoing operation and administration after completion.

In addition, the age and condition of the pre-existing supply provisions in some of the areas affected meant that each needed detailed, separate consideration to decide how best to upgrade, expand and integrate it into the new project.

A number of factors were examined prior to implementation to ensure these goals were met, including the use of advanced computer modelling techniques to analyse each individual system allowing optimum pump sizing, water input and distribution details to be determined.

The decision to switch extensively to the use of PVC pipes, rather than asbestos cement, arose during this process, as part of the considerations of wider health benefits deliverable by the scheme.

In keeping with the country’s water services master plan, which covered up to 2010, the work also took account of the need to ensure the systems put in place had sufficient capacity to accommodate the relevant population projections over the same period.

"The African Development Bank and the Government of Malawi were responsible for funding the project, which was implemented by the Ministry of Water Development."

The CRWB has just one – Mchinji. Some 240,000 people living around these 13 centres benefit from the project, with individual metered connections provided for those who can afford them in the urban areas and public standpipes for the poorer inhabitants. The project’s goal for rural communities was to provide an average of 27 litres of drinking water per person per day, with the supply standpipes situated never more than a 0.5km walk away.

This represented a major advance in a country where most of the population of 11 million live in traditional, high density housing areas with no internal plumbing, getting water from communal water points and using unprotected pit latrines.

The RWBs were well aware that simply providing good drinking water is not enough on its own to improve public health and so, in the final phase of the project, an extensive education programme and drive called Sanitation and Health Education (SHE) was carried out to improve sanitation on a local basis.

At the same time, the Water Point Committees (WPCs) training in financial management continued, to enable them fulfil their roles in running the project’s water points and sanitation facilities.

This is a vital part of DWS III since there is a long history of donor-funded projects collapsing once the donor is pulled out. ADB funding ceased in December 2003 and the project became dependent on ordinary men and women at grassroots levels.

Accordingly, the WPCs’ effectiveness in raising and managing funds is widely viewed as the key to the programme’s sustainability.

The African Development Bank and the Government of Malawi were responsible for funding the project, which was implemented by the Ministry of Water Development. Stantec was the main contractor, responsible for the design review, supervision and construction elements.

They worked closely with Chapita consulting engineers who provided support staff and project facilities during the design review.

Elizabeth Gondwe was project accountant. Water delivery and distribution is performed by the three respective RWBs, with local operation and administration run by water point committees on a day to day basis.