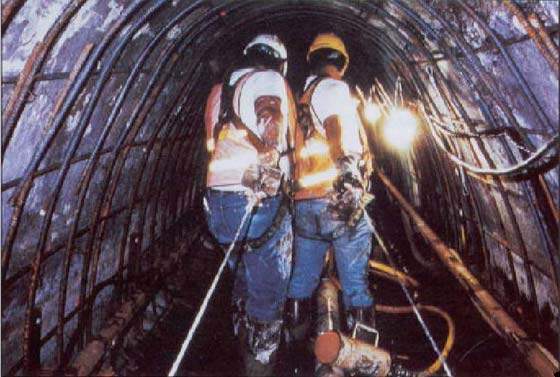 The South Leg Sewer renovation project was instigated in response to recent cave-ins in the 75 year old concrete structure. 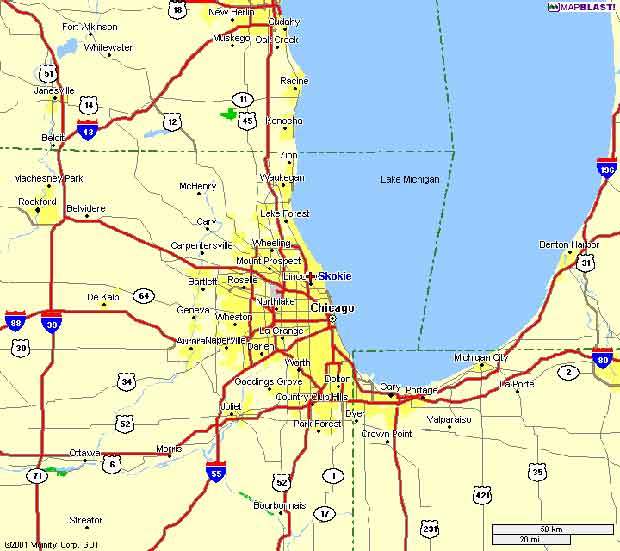 Map showing the location of Skokie in Illinois, USA. 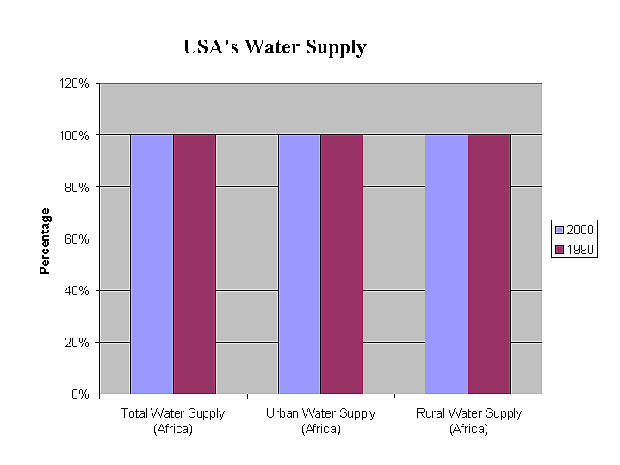 Graph showing the supply of water throughout the USA.

In August 1996 the Metropolitan Reclamation District of Greater Chicago awarded the contract to rehabilitate the South Leg sewer, located in Skokie, Illinois, to Kiewit-Powers, a joint venture company. The project cost was $8.2 million which included diverting the sewer flows, installing ventilation and lighting, cleaning the existing sewer, installing and epoxy-coating a 15cm-thick reinforced concrete liner and constructing two new manholes.

The original horseshoe-shaped concrete interceptor sewer was dug by hand in the 1920s. It had transported combined flows of sewage and surface run-off from the North Shore area of Skokie, Illinois, to the Northside Waste Water Treatment plant for over 75 years, before a series of collapses within the tunnel prompted its renovation.

The sewer is 268m long, 1.95m in diameter and lies 10.5m below the roadway of McCormick Boulevard. The pre-existing access to the sewer was via a series of 0.5m-diameter manholes spaced between 150m and 250m apart along the middle of four lanes of traffic. Since the project called for the construction of four additional access shafts, two in the center section and two at either ends of the sewer run, traffic was restricted to a single lane in each direction so that the work could proceed safely.

Holes for the steel piles were augured down to the top of the sewer and piling lowered into place by hydraulic crane. A Kontsu PC400 track-hoe equipped with a vibratory hammer was subsequently used to achieve proper toe elevation. The exposed top of the concrete sewer vault was then demolished by hand. Construction of these new shafts began in May 1997 and took about three weeks.

To complete the rest of the project the existing flows had to be redirected safely, efficiently and in a cost-effective manner. Inflatable plugs were installed to create a local backflow, diverting around 114,000m³/day of wastewater into a nearby deep section of the sewer network without the need for further engineering work.

A screed rail system was installed to facilitate the pouring of the concrete used in the project. The walls of the existing sewer were drilled at 2m intervals and steel angle brackets bolted on to support 5cm x 5cm Bidwell rails. As the pour progressed the used track was taken up from behind the site of operation and re-laid ahead at a rate of around 100m to 140m per day.

The intention had been to reline the tunnel with 15cm of rebar-reinforced concrete with an epoxy coating and, to meet contractual deadlines, steel arch forms were pre-fabricated to be used in this operation. However, because the tunnel was in use and still carrying 2/3 of its normal capacity flow it was not possible to inspect it ahead of the initial planning stages. When a floating pontoon raft equipped with lighting and a video camera was used to investigate the state of the sewer prior to the start of the renovation it became clear that only a short segment of the ageing tunnel was straight enough to reline using the methods originally planned. Once the flow diversion had been put in place an extensive survey was performed and accurate drawings of the existing sewer were produced using computer-aided design.

This led to the conclusion that relining the sewer called for the use of wet mix shotcrete with rebar reinforcements, followed by a hand-trowel finish to provide a base for the final epoxy coating. The particular constraints of the job dictated that the shotcrete had to be applied by a remotely operated arm and spray assembly capable of accurate and consistent placement within the confines of the tunnel. The first coat of shotcrete was 12cm to 15cm thick. Alkali-free accelerator was added at the spray nozzle to give better adhesion and a faster set. The second layer, with no accelerants, was applied and subsequently finished off by hand.

A specially equipped spraying trailer was then used to apply high-spec epoxy lining to the 10,000m² surface area of the shotcreted arch to increase smoothness and to slow the corrosion process. After completion of the epoxy coating, construction of the new manholes was finished off, the cofferdams removed and the flow restored into the renovated sewer.

Final landscaping and re-instatement work commenced in April 1998 and the project was completed in May the same year.

Kiewit-Powers was lead contractor with Kiewit Engineering providing assistance with the detailed sewer survey. Shotcrete Technologies were responsible for the shotcreting, providing the robotic arm and remote spraying system.