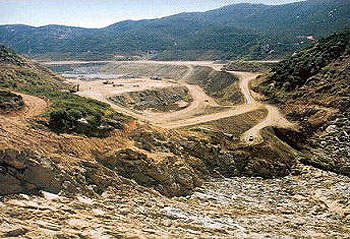 The dam site during excavation that involved approximately 700,000yd³ of granite being blasted and cleared. 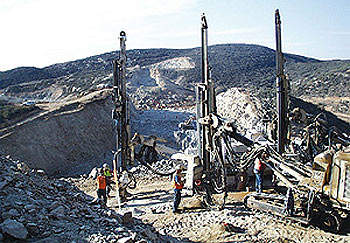 The Olivenhain Dam during construction. 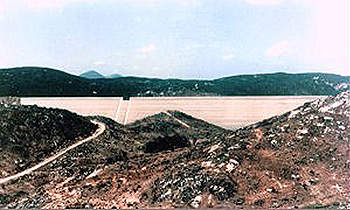 The Olivenhain Dam reaching the end of its construction phase.

The $200m Dam and Reservoir scheme will ensures that the San Diego County Water Authority is able to provide a safe water supply in the event of an interruption in imported water deliveries.

The dam, 318ft tall and 2,400ft wide, does not block a stream or river. It boxes off a canyon and is filled with imported water. The reservoir holds 7.8bn gallons of water, or enough to sustain 192,000 people for a year.

The Emergency Storage Project is a system of reservoirs, interconnected pipelines and pumping stations designed to ensure water is available to all communities in the San Diego region in the event of an interruption in supply caused by a drought or major earthquake. This could interrupt San Diego’s water supply for anything up to six months.

In 1989, the San Diego County Water Authority (SDCWA) embarked upon a Capital Improvement Programme (CIP). The programme was initiated to make necessary improvements to the pipeline delivery system and to increase operational flexibility in supplying water throughout the county.

Currently, imported water from the Metropolitan Water District of Southern California is used to meet up to 90% of the region’s water demand.

The Emergency Storage Project will connect existing sources of water, ensuring water flows throughout the system even in the event of a disruption. It will also provide additional 29.4bn gallons of stored water.

Combined with the storage space already dedicated to emergency use, the additional capacity is projected to meet the county’s emergency needs through to at least 2030.

The site of the 200-acre reservoir is about a mile west of Lake Hodges, on the southern edge of the Elfin Forest Recreational Reserve in San Diego County, California.

The Olivenhain Dam, designed by a joint venture of Parsons Engineering Science, California and Harza Engineering, Chicago, has a storage capacity of 7.8bn gallons of water. Of the available supply, 1.3bn gallons is dedicated to Olivenhain Municipal Water District’s operational use, and the remaining water is available for emergency water use throughout the county.

The 318ft-high, 2,400ft-long Olivenhain Dam is the centrepiece of SDCWA’s Emergency Storage Project, which provides water from the Colorado River and northern California.

Construction of the dam began in 2000, with the Nebraska-based Kiewit Pacific as the main contractor, and was completed in August 2003.

Roller-compacted concrete is placed in layers. The layers are compacted with rollers similar to those used in road building. Interruption of work must be minimised to facilitate bonding of the layers. Therefore, crews worked 24 hours a day, seven days a week during a 10-12 month period to construct the dam.

The $8.4m excavation contract was awarded to California-based Ladd Associates. This work involved approximately 700,000yd³ of material being blasted and excavated for the foundation of the dam.

A $1.25m test section was built by Kiewit Pacific that helped establish what forming and placement techniques should be used. This included establishing the optimum thickness of the roller-compacted concrete and the mix of materials to build the dam.

“The Olivenhain Dam has a storage capacity of 7.8bn gallons.”

The outcome was to build the concrete in 12in lifts. It also confirmed that granite quarried from the canyon at the site could be crushed into various sizes and used as the primary material in building the dam. This helped to keep costs down.

Concrete was placed by conveyor, rather than trucks, to minimise contamination by soil, dust and other materials.

The test also established the bonding qualities of the concrete mix, which was a 3,000-psi mix of 50% portland cement and 50% flyash, designed by Gannett Fleming, Harrisburg, Pa.

A PVC membrane installed on the dam’s upstream face prevents leaks through the lift joints, which is common on wet downstream faces.

The dam is a joint project of the County Water Authority and the Olivenhain Municipal Water District.

The $200m project was funded by a cooperative effort between the San Diego County Water Authority and the Olivenhain Municipal Water District, a one-sixth partner. The Olivenhain district holds rights to 1.3bn gallons of water.

A 750-acre open-space park and recreational area surrounds the dam and reservoir. This reserve offers 17 miles of hiking, mountain biking, equestrian trails and viewing points. The wildlife and natural resources on this reserve are all closely monitored.

The reservoir itself covers 200 acres on the reserve and is as deep as 300ft. In addition, the face of the dam is stained with a colour that blends into the natural surroundings of the area.