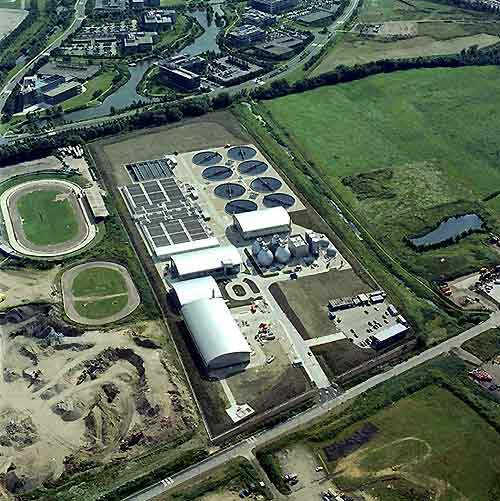 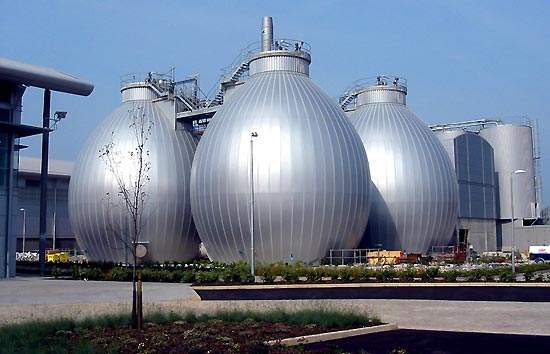 The plant's four egg-shaped anaerobic digesters; the first of their kind in the country, they are of reinforced concrete construction, with external cladding. 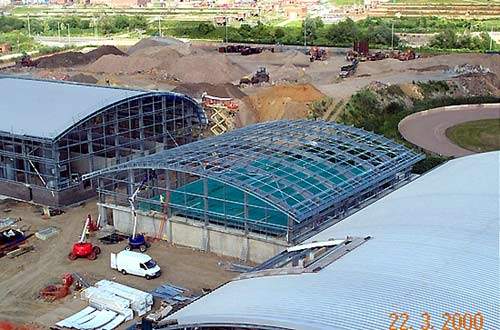 Aerial view of the lamella settlement tanks during construction; the plant has six of these, which provide primary settlement. 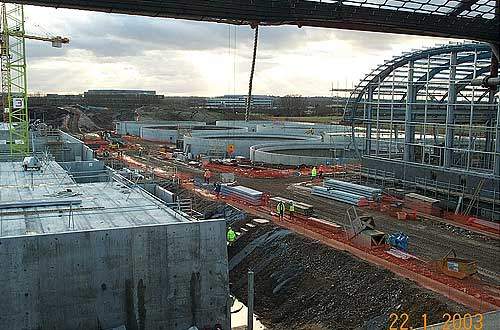 The Island Road works is the first completely new plant to be built by Thames Water since privatisation in 1989 and is one of the most technically advanced facilities of its kind in the UK. 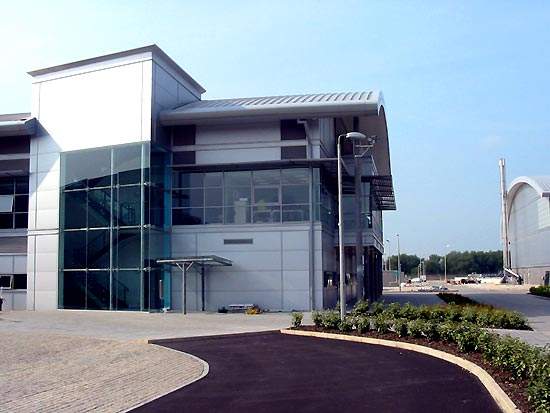 A flagship facility, the plant has already won awards for its design. Its position on the southern gateway to the city made its architectural appearance of major importance. 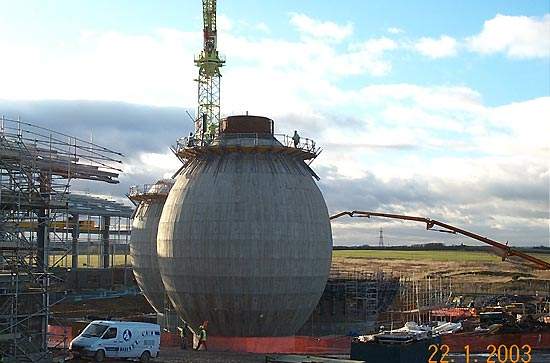 The digesters during construction. They were built using a specialist formwork system. 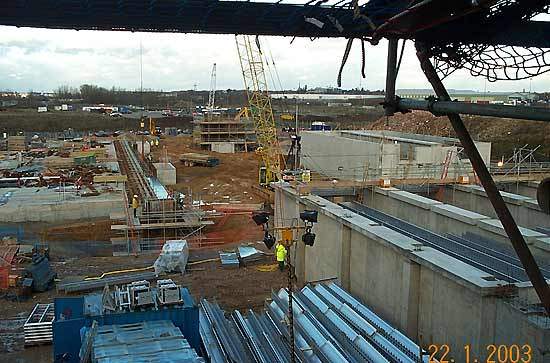 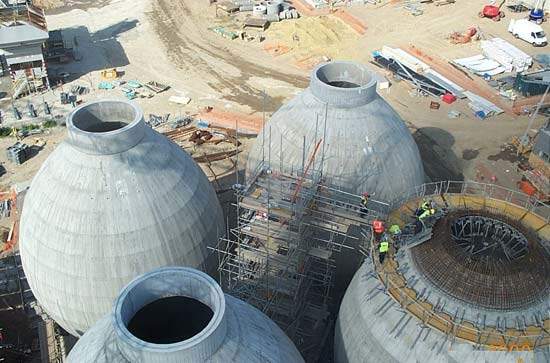 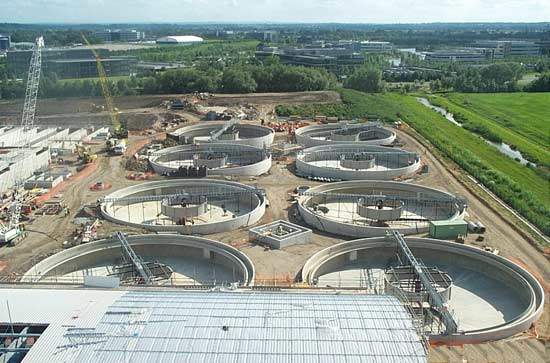 Trickling filters in construction. After final settlement and tertiary sand filtration the treated flow is discharged into the River Kennet via Fobney Brook. 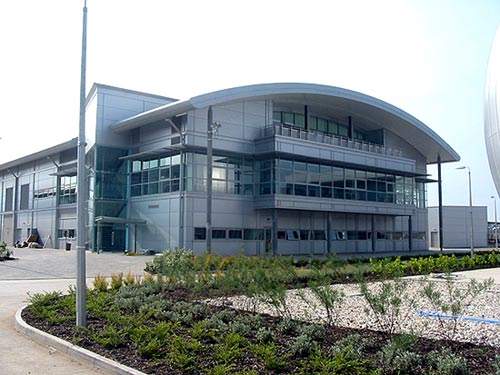 The plant was designed not only to meet the technical demands of effluent and sludge quality, but also to address a wide spectrum of environmental issues.

Formally opened by the Environment Minister, Elliot Morley, on 18 January 2005, the new sewage treatment works on Reading’s Island Road is one of the most technically advanced facilities of its kind in the UK. This is the first completely new plant to be built by Thames Water since privatisation in 1989, and is one of a number of projects undertaken by the company under Asset Management Plan 3 (AMP3).

Target Alliance – a single project alliance partnership of Thames Water with the Black & Veatch/Taylor Woodrow JVC – was established to act as main contractor to address the design, construction, installation and commissioning of all the civils, process, mechanical and allied works. The project itself comprised the remediation of the original brownfield site, together with the provision of effluent and sludge treatment streams. Reading’s main sewage pumping station was also extensively
refurbished in a separate part of a programme of works undertaken by Thames Water / Engenica to transfer the flows to the new site.

The new €80 million works have been designed to meet the needs of an increased population and to ensure compliance with the new EU standards for treated-effluent discharge and sludge treatment. Widely viewed as a flagship facility showcasing Thames Water’s leading-edge environmental technology, the plant has already won a CEEQUAL Award of Excellence and ‘Best Bespoke Industrial Development’ at the Industrial Agents Society / Office Agents Society (IAS/OAS) Awards.

The pre-existing Manor Farm WWTW had been built in 1875 and received a series of upgrades and improvements over the subsequent years, with the last major refurbishment work being completed in 1963. Although it would have been possible to further upgrade the old plant to achieve compliance, the demands of an increased population and a physically expanded city coupled with long term odour issues – the so-called “Whitley Whiff” – made new construction the best value option. The Island Road site is situated a quarter of a mile (0.4km) from Manor Farm and had previously been owned by the Reading Borough Council.

In January 2001, at the same time as the detailed design phase began, remediation work started on the brownfield site, which had been host to old sewage sludge lagoons as well as municipal and other wastes. The remediation programme was both extensive and challenging, involving the removal of nearly a quarter of a million tonnes of sludge and waste, while preserving local wildlife, protecting aquifers and minimising the disturbance to neighbouring residents and businesses.

From the outset, the plant was designed not only to meet the technical demands of effluent and sludge quality, but also to address a wide spectrum of environmental issues, ranging from the visual impact of the plant on the city’s southern approach to the inevitable odour concerns.

To achieve the high standards set for the new plant, odour control measures were central to the planning, being integrated with both process and architectural design early in the conceptual phase, which led to significant up-front reduction in potential sources of nuisance. In addition, Target Alliance also decided at the outset to operate an Environmental Management System and seek ISO14001 certification – factors which were to contribute strongly to later CEEQUAL award success.

The main driver for the new plant was impending change to the European standards, effective from March 2005. However, since the Reading works treats both domestic and brewery waste, the design of the new plant had a number of additional factors to take into account, which resulted in effective biological nutrient removal at the site being an important consideration. The overall scheme had to be able to satisfy strict operational requirements and qualify for renewable obligation credits (ROC),
while also keeping options open for future development, such as the installation of struvite crystallisation or solid waste digestion systems.

One on-site and five off-site pumping stations feed the plant, with Reading’s main Blake’s Lock pumping station supplying over half the total inflow. The main domestic flow is screened to 6mm at the inlet works before oil, fat, grease and grit removal. Six lamella settlers provide the primary settlement. The brewery flow – which accounts for the majority of the trade load to the plant – arrives separately and is screened to 2mm. Water conservation measures at the brewery itself make this a relatively high-strength wastewater and the rapidly biodegradable COD it contains is in the wrong form for biological phosphorus removal.

In order to remove the risk of process disruption, this flow is mixed with the return activated sludge (RAS) and enters a fermentation zone, before finally entering the bioreactor anaerobic zone, along with the settled sewage.

Biological nutrient removal is achieved using a modified three-stage Bardenpho process. The bioreactor itself consists of two mechanically mixed un-aerated lanes and six aerated lanes which are mixed by fine bubble diffusion. Both sets of lanes have a free water surface. There are five functional zones within the bioreactor – fermentation; anaerobic; anoxic contact; anoxic and aerated. In turn, they are responsible for fermenting the brewery waste and denitrifying the RAS, stimulating phosphorus release, mixing the nitrified mixed liquor with anaerobic zone discharge, nitrate reduction and finally oxidising the ammonia and BOD.

Provision has been made for dosing the bioreactor with iron salts at three locations; at the inlet to the bioreactor before the fermentation zone, at the flow splitting weir to the final settling tanks or within the last aeration cell. Ferric consumption is directly proportional to the mass of phosphorus returned with the dewatered liquids but is not expected to exceed 300kg/d as iron based on the anticipated loads and design model.

The treated flow then undergoes final settlement and tertiary sand filtration before being discharged into the River Kennet via Fobney Brook.

After being belt thickened and blended, the primary and secondary activated sludges enter the Alpha Biotherm pasteurisation plant’s thermophilic aerobic digester through a macerator, where they are held at 70°C for one hour.

The pasteurised sludge is subsequently pumped to four bottom-fed, egg-shaped, anaerobic digesters, each some 20m high. These are the first of their kind in the country, constructed entirely from reinforced concrete with external silver cladding. The heat required for the pasteurisation and digestion processes is provided either by digester biogas through CHP engines or three dual fuel (biogas / diesel) boilers.

The final digestate is dewatered by centrifuge and transferred to one of three sludge cake silos for storage, while the thickener and dewaterer liquors are returned to the effluent stream for treatment. This liquor return is important since the sustainability of biological phosphorus removal is partly dependent on the mass of phosphorus returned in this way.

The plant is owned by Thames Water. Target Alliance – a single project alliance partnership of Thames Water with the Black & Veatch / Taylor Woodrow JVC – was the main contractor. Clarke Energy UK is the CHP O&M contractor and the biogas gas engines used in the system were supplied by Jenbacher. Alderley Systems was the odour control subcontractor. Chemviron and Gleeson provided odour control and de-sludging services. Envirosim Associates provided the optimisation software used. The main contractor for the associated pumping station refurbishment was Engenica. Hidrostal supplied the screw centrifugal impeller pumps used and WEG the electric motors.