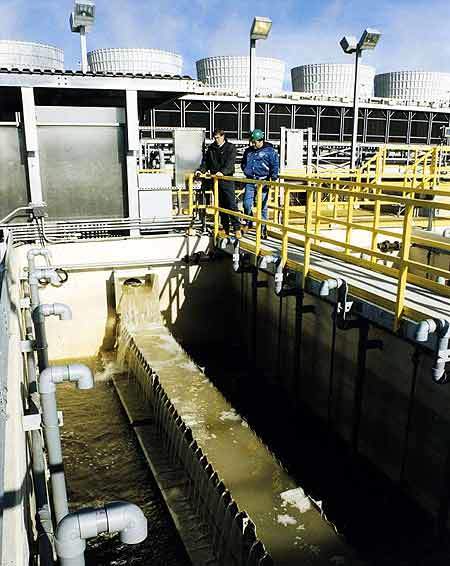 The concrete tanks of the Hydro-Clear pulsed bed sand filters. 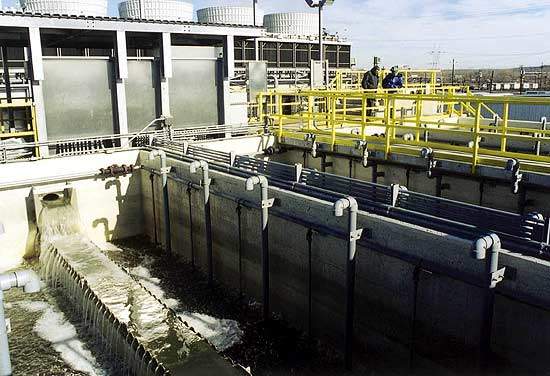 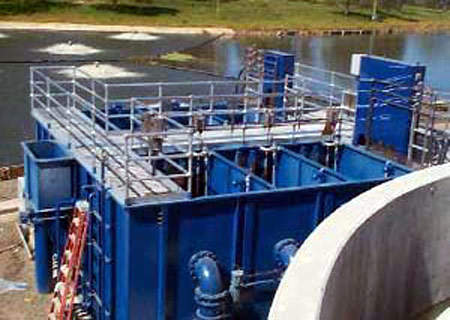 In August 2002 PSEG Power, the energy producing subsidiary of Public Service Enterprise Group (PSEG) awarded USFilter, acquired by Siemens Water Technologies in 2004, a US$1.2 million contract for a system to filter reclaimed water for reuse in the cooling towers at its Linden Combined Cycle Plant in New Jersey.

The 1,220MW project began commercial operations in May 2006. The plant uses about 12mgd (8,100gpm) of reclaimed water from the Linden and Roselle Sewage Authority (LRSA) for its cooling tower make-up.

A state-wide drought necessitated the New Jersey Department of Environmental Protection (NJDEP) to mandate water-use restrictions. PSEG Power formed a drought emergency response team to develop water conservation plans for increasing water reuse capacity of the power generation plant and design the reclaimed water treatment system to feed the station’s boilers. The reclaimed water, which is treated effluent from local municipal wastewater treatment plants, is reused at the Linden Combined Cycle Plant instead of being discharged into local receiving streams.

The installation has increased the water reuse capacity to around 10,000gpm, while use of recycled treated wastewater for cooling tower makeup and the closed loop cooling systems has reduced the municipal water consumption of the plant by about 10 million gallons per month.

Reclaimed water from LRSA wastewater treatment plant is piped to an auxiliary treatment facility where the water is chlorinated and filtered. After filtration, the reclaimed water is pumped approximately one mile to the Linden power station and further treated.

The treatment includes the addition of hypochlorite to kill selected biological organisms and the sand filters to remove grease, residual oil and suspended solids from the treated water. It is then pumped at 8,100gpm via a 24in pipe to the plant’s cooling tower basins. The water is conventionally treated in the cooling basins.

Those guidelines explain that the importance of Reclaimed Water for Beneficial Reuse (RWBR) programmes came to light during the drought of 1999, when the New Jersey state experienced firsthand the importance of protecting and conserving potable water
supplies.

The process prevents scaling and foaming of the two ten-cell mechanical draft-cooling towers. Excess water is returned to the wastewater treatment plant where it is stored in tanks and discharged maintaining the flow. The beneficial reuse of reclaimed water reduces the power station’s dependence on potable water while assuring a reliable, continuous source.

The factors that drove the need to reuse reclaimed water included the cost of potable water, closeness of the source and the NJDEP guidelines for beneficial reuse of reclaimed water.

The guidelines explained that the importance of reclaimed water for beneficial reuse (RWBR) programmes came to light during the drought of 1999, when the New Jersey state experienced firsthand the importance of protecting and conserving potable water supplies. RWBR programmes involve taking what was once considered waste, giving it a high degree of treatment and using the resulting high-quality reclaimed water for new beneficial uses.

PSEG Power uses reclaimed water for cooling and other power station needs. The company has been using Hydro-Clear filters for more than six years for a similar application at its Bergen power station.

PSEG Power is one of the USA’s largest independent power producers with approximately 16,000MW of electric generating capacity in operation or construction.

The Hydro-Clear filter features an under drain system and a shallow bed (10in deep) of single-media, fine-grained sand. Designed for filtration of solids from wastewater treatment plant effluent, the Hydro-Clear sand filter is a gravity filter that incorporates a shallow bed design and the ability to periodically ‘pulse’ the bed during the filter cycle, in order to increase the overall length of the filter runs.