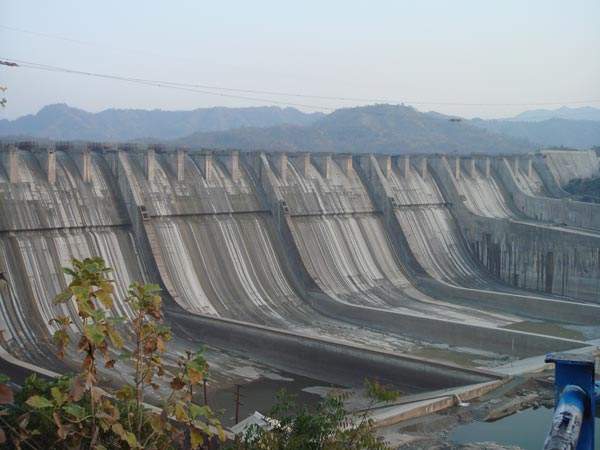 Height of the Sardar Sarovar Dam in Gujarat was increased to 121.9m in December 2006. 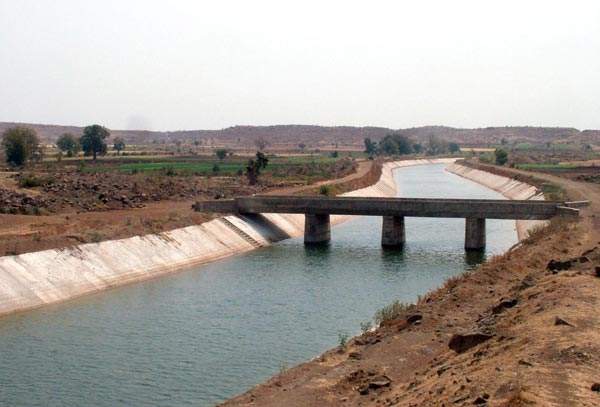 The Narmada Main Canal is the largest irrigation lined canal in the world, supplying water at a capacity of 1,133 cubic metres a second. Image courtesy of Nvvchar. 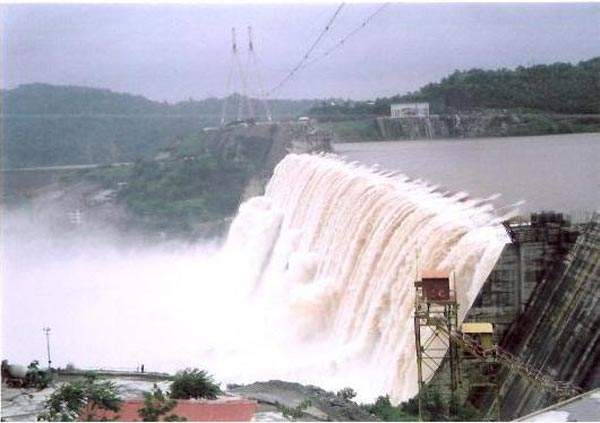 The Sardar Sarovar Dam and associated water infrastructure is expected to supply water for irrigation of 1.84 million hectares in Gujarat. Image courtesy of Nvvchar.

Sardar Sarovar Dam (SSD), on the Indian Narmada river, is located in the village of Kevadia in the state of Gujarat. It is one of the largest and most controversial interstate, multipurpose river valley infrastructure development projects in the country. The Sardar Sarovar Project (SSP) also consists of auxiliary works and a 1,450MW power complex.

SSP was estimated to have cost INR400bn ($8bn) in 2010-2011, revised from the initial estimate of INR64bn ($1.25bn) in 1988. It is part of the Narmada Valley Development Project, a major plan to generate power and supply water for drinking and irrigation to states of Gujarat, Madhya Pradesh and Maharashtra.

The scheme was conceived by the late Sardar Vallabhbhai Patel in 1946-1947. It envisages the construction of 30 major dams, 135 medium and 3,000 smaller dams along the river, with SSD being the largest of them all. They are expected to generate about 4,000MW of power in total.

The SSD is a 1,210m long concrete gravity dam with a proposed final height of 163m above the deep foundation. Its present height is 121.9m. Its construction required pouring of about seven million cubic metres of chilled concrete. The Sardar Sarovar reservoir, built for the main dam, has 0.95 million hectare metre (M.Ha.m) of gross storage capacity and 0.586M.Ha.m of live storage capacity.

It occupies an area of 37,000ha with an average length of 214km and width of 1.7km. The river catchment area above the dam site is 88,000 square kilometres. It has a spillway discharging capacity of 87,000 cubic metres a second.

The dam and the reservoir periphery have been installed with advanced seismological instruments for calculating the stresses. Seven chute spillway radial gates and 23 service spillway gates are installed for flood control. The full reservoir level of the SSD is 138.6m, the maximum water level is 140.2m and minimum draw down level is 110.6m. The tail water level is about 25.9m.

Narmada is the fifth largest river in India, traversing 1,312km from the Amarkantak range in Madhya Pradesh to drain into the Arabian Sea at the Gulf of Cambay. The river has a basin area of 97,410 square kilometres.

The SSP is expected to supply water for irrigation of 1.84 million ha of land across 15 districts and 73 suburbs including drought prone regions in Gujarat, as well as two districts of Rajasthan. It is also expected to supply drinking water to 29 million inhabitants across 131 towns and 9,633 villages in the state.

It will supply water to wildlife sanctuaries and industries, as well as secure the needs of Gujarat’s expected population of 40 million, projected by 2021.

A state-wide drinking water grid is expected to supply for about 75% of the Gujarat population. Gujarat Water Infrastructure and the Gujarat Water Supply and Sewage Board (GWSSB) are executing this Narmada Master Plan.

The 66,000km network of conveyance and distribution system includes the Narmada Main Canal (NMC), about 2,500km of branch canals, 5,500km of distributaries and other associated channels. The 458.3km long, 1,133 cubic metres a second capacity NMC in Gujarat is the largest irrigation lined canal in the world. It further extends by 74km in Rajasthan. It also has 38 off-taking branch canals being built in phases and is scheduled for completion by 2025.

Construction history and opposition protests against the Narmada dam

Plans for the dam projects in the Narmada basin were initiated in 1946. The SSP project has been under constant criticism since its early stages. Its construction was halted several times due to court stay orders and oppositions.

"A state-wide drinking water grid is expected to supply for about 75% of the Gujarat population. Gujarat Water Infrastructure and GWSSB are executing this plan."

Works could not start due to water sharing disputes among the concerned Maharashtra, Rajasthan, Gujarat and Madhya Pradesh states. The Narmada Water Dispute Tribunal (NWDT) was formed in October 1969 to resolve the issues and allocate the water shares. NWDT reached an agreement in 1979 and construction of the dam was started in April 1987. The construction was backed by funds from the World Bank.

A group of local people opposed the project in 1989 under the Narmada Bachao Andolan (NBA, or Save the Narmada Movement). The World Bank withdrew the funding in 1993 following immense protests, resulting in delays to the project.

NBA claims the government has overlooked the environmental impact, resettlement of 320,000 people and exaggerated project benefits. About one million people are estimated to be affected by the river canal and associated works. Several other local groups across the states concerned also opposed the SSP.

The 250MW surface canal head power house (CHPH) consists of five, 50MW Kaplan turbines. The CHPH power units were commissioned by December 2004 and RBPH by November 2006. The power stations are connected to a Gas Insulated Switch Gear and bus bars switchyard complex in RBPH. Electricity is distributed to Gujarat (16%), Madhya Pradesh (57%) and Maharashtra (27%) through a 400kV power transmission line.

Sardar Sarovar Narmada Nigam (SSNL), a state-owned company, is responsible for implementing and managing the SSP. Jaiprakash Associates was the engineering, procurement and construction contractor for the dam and power house. Gujarat State Electricity Company operates and maintains the power complex.